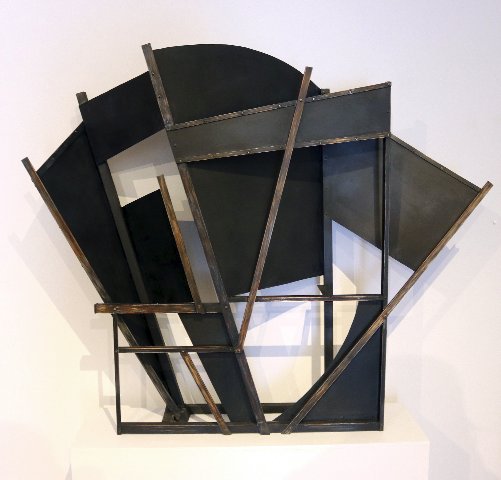 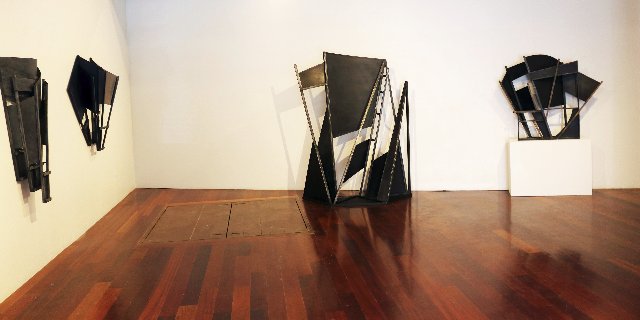 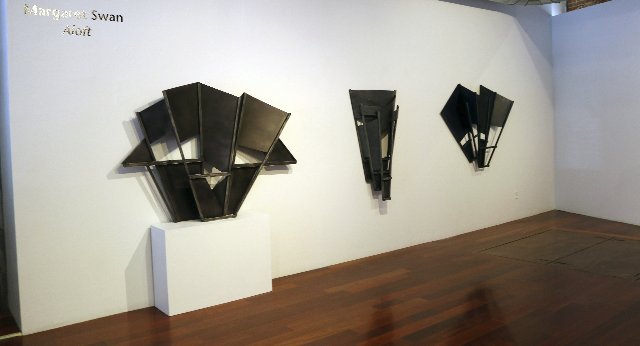 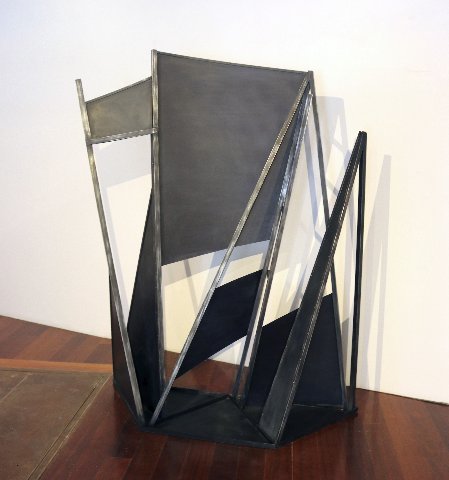 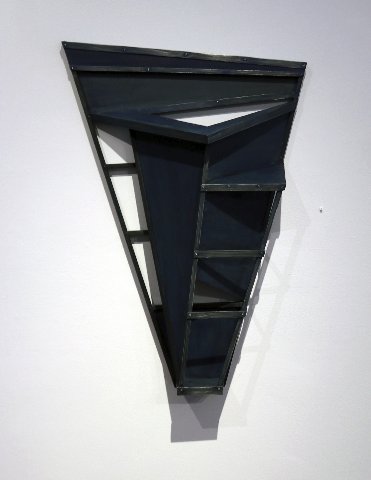 The recent exhibition of relief works in metal “Aloft” by Margaret Swan, at Boston Sculptors Gallery, provided the pleasure of viewing the latest evolution of an artist I have followed for decades.

While the work develops and changes there is an aspect of aesthetic DNA that is consistent with my first encounter decades ago.

As is so often the case with artist and critic there is that first blush of aesthetic romance and then the playing out of twists and turns through increments and intervals of time,

Absorbing the latest efforts of an artist, whom I have long admired, evokes the Proustian notion  plus ça change, plus c'est la même chose.

Yet again we encounter splayed, fan like, relief forms. This time with a play of armature, planes of metal, and passages of openness allowing us to see the lightening of white wall on which the works, in varying scale, are mounted. Here metal is dark but, with the analogy to a tall ship, there would be the interplay of billowing white canvas set against patterns of sky and clouds.

The press release for the exhibition references the nautical in “forms that evoke the structure of sailboat rigging.”

That may be, but in my neoplatonic after shocks of primary impressions, they are the latest variation of initial paradigms established long ago.

Walking into the space I immediately and joyously recognised that these were works by Swan. There was a familiar Swanness, an essence of shape and program. That channeled a life long, singular, deep exploration through a way of seeing with endless variations of material and approaches to fabrication.

There are memories of encounters from decades past when she was creating escutcheon or shield-like forms. They entailed curves and cubist, neoplastic, overlays of shapes. They referenced the works in early plastics by the Russian sculptor Naum Gabo.

Then and now there is an exquisite take on the pristine finesse, polish and resolution of her practice.

There are elements of similarity and difference in this latest exhibition. The most progressive aspect is the elegant simplicity of material, armature, sketching and framing, of Greenbergian flatness of planes.

Her early champion was the formalist critic and curator, the late Kenworth Moffett. Primarily his taste focused on painting but he was an advocate of the sculptors in direct metal; David Smith and Anthony Caro.

That purist, nonobjective, modernist modality defined her work. Through the lens of restrictive and narrow Greenbergian vision there was a way of seeing and a template for addressing the early work.

Where we differ, however, is that compared to non objective formalism, I have always found a narrative in her work. Early on, there was the medievalism and chivalry of the shields. Those works created a head dance of  jousts and heraldic battles, knights in shining armor. Now the nautical sail forms have me on deck with peg-legged Captain Ahab in a vision quest for Moby Dick.

Which may be not at all what the artist has in mind. Perhaps here we might cue up  Mussorgsky’s “Pictures at an Exhibition.” Noting of course a substitution of relief sculptures for paintings.

There is utter madness when critics and composers transform contemplation of visual art into words and music. In that regard, the works of Swan prove to be a fanciful muse.