Candida and Blithe Spirit in Pittsburgh 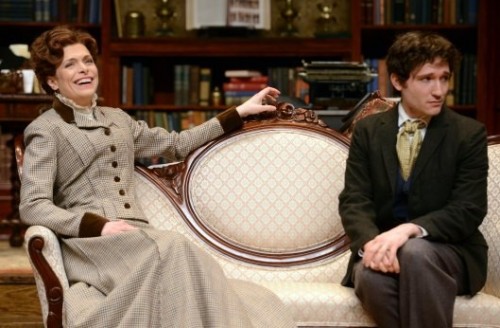 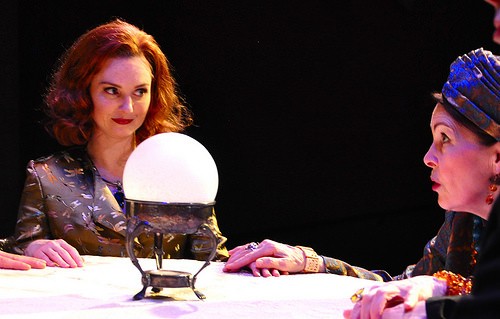 The productions of George Bernard Shaw’s Candida (at the Pittsburgh Public Theater) and Noel Coward’s Blithe Spirit (at PICT Classic Theatre) have a good deal in common: both plays are twentieth-century British comedies that dig humor out of marital relations and shine some light (more brightly in the Shaw, less so in the Coward) on male chauvinism, and both productions faithfully reproduce the period and style of the playwright and his era.

In both plays, too, the main conflict involves misplaced jealousy and suspicion. For audience members who love comedies of verbal wit that revolve around misunderstandings and misreadings, there is a veritable embarrassment of British-classic-comic riches in town at the present moment.

In Candida the Reverend James Morell (David Whalen), a successful, self-satisfied pastor, is put out of sorts upon discovering that the younger Eugene Marchbanks (Jared McGuire) has fallen in love with his wife Candida (Gretchen Egolf). Morell is a political idealist, a Christian Socialist who not only spends most of his waking hours preaching in favor of political and social equality, but also practices it at home, insisting that both he and his wife do their share of dishwashing and lampblacking and other domestic chores. Marchbanks is romantic idealist, a young blueblood poet who believes that Candida deserves better than Morell, and that she is debased by doing petty housework.

In the end, Candida is forced to choose between the two men; before he has her do so, the proto-feminist Shaw gives her a nice sharp speech in which she makes clear that both men have misunderstood who she is and what she wants. In the end, she chooses and simultaneously rescues the “weaker” of the two men – her husband – driving home the play’s parody of conventional comedy (in which the husband inevitably rescues his weaker wife from the dangers of straying).

In Blithe Spirit Charles (Dan Rodden), a wealthy novelist, invites Madame Arcati (Mary Rawson) to conduct a séance at his house for the purposes of research for his next novel. His wife Ruth (Daina Michelle Griffith) and friends Dr. and Mrs. Bradman (Jim FitzGerald and Lissa Brennan) are deeply skeptical but gamely participate; the séance takes an unexpected turn and brings Charles’s first wife Elvira (Vera Varlamov) back as a ghost. She is only visible and audible to Charles, which triggers all sorts of farcical misunderstandings as Ruth mistakes his answers to Elvira as insults to her.

Once Ruth is convinced that Charles is, in fact, seeing the ghost of his first wife, she becomes jealous and convinced that Elvira is trying to kill Charles to have him back; but Elvira’s plans backfire unexpectedly. Since part of the fun of the play is its third act plot twist, I won’t give away more of the story, except to say that by play’s end the house is more full of spirits (blithe or otherwise) than a living human can bear.

Readers who are fond of stiff-upper-lip British comedy and only wish to know whether these two plays are well-performed by their casts (they are, and in particular Daina Michelle Griffith is in high comic form as the rather miffed Ruth in Blithe Spirit), well-designed (yep: in particular, both productions have stunning, detailed interior sets, and the room in Blithe Spirit has a comic life of its own (hint: keep an eye on the painting)), and witty and entertaining (they are), can and should stop reading this post here, buy tickets, and enjoy the shows.

In the rest of this post – because I’m not writing for a newspaper, and so I can do this – I want to discourse briefly on why it is that, despite their high quality, both productions left me feeling, quite frankly, disappointed, irritated, and more than a tiny bit insulted.

In a nutshell: both productions entertain, to be sure, but they do so by occupying the safest middle ground imaginable. These are museum pieces; they seem more like films, frozen in time, than theater, meant for a present, and present-day, audience. If I may be permitted to borrow a term from Brecht, to my mind both productions exemplify “culinary” theater, a term he never clearly defines but which I’ve always taken to mean: theater that, like a good culinary meal, is expensive, beautifully prepared, in good taste, easily digested, and quickly passes right through you.

In both cases, I left the theater wondering why: why did I just see that? why was this play included in the season? why were there no directorial, design, or performance risks taken to make the material fresh, new, relevant?

Don’t get me wrong: I’m not advocating that every production of a classic play be approached with a “concept,” or be made “topical” and “relevant” for today’s audience. I am all for doing a play as written, in period, honoring the playwright’s intentions. But that doesn’t mean it has to be merely a safe reproduction of whatever the director imagines the original was. I offer PICT’s terrific production of Three Sisters a couple of summers ago as an example of a true-to-period, non-”concept” production that found something new and true to say with and through the play: director Harriet Powers not only found innovative ways to make the play the LOL-comedy it’s meant to be, but also filled the silences in Chekhov’s text with action that enriched and heightened its tensions. Surely there are equally piercing insights to be discovered and revealed even in old die-hards like Candida and Blithe Spirit?

“Well,” you might rightly challenge, “what would you suggest be done with a play like Candida or Blithe Spirit to make them less ‘safe’ and more ‘risky’?”  I don’t have an answer to that question, specifically, because the answer could only emerge from deep exploration of the play with an ensemble. But in reply to that challenge, I would point to the risks, small and large, that I’ve seen taken with classic plays, sometimes successfully, and sometimes not. Mabou Mines’ Doll’s House, in which the male characters were played by little people, and the female characters by unusually tall women. Joanne Akalaitis’s production of Schiller’s Maria Stuart, in which a heightened acting style brought the text alive in surprising and enchanting ways (and if you know the play, you know what an achievement that is!) Closer to home and more recent to memory: Conall Morrison’s drag production of Wilde’s The Importance of Being Earnest at PICT a few years ago, Quantum’s Twelfth Night, the above-mentioned Three Sisters, and even CMU’s last three Shakespearean productions (Romeo & Juliet, Richard III, and Midsummer Night’s Dream).

I’m not sure all of these would be considered “successes” by all viewers, but the risks taken made them all worth experiencing — and the fact that I can recall all of these without looking up notes or previous reviews means that they were, to some degree, unforgettable.

Which is, alas, not a label I can confidently attach to either of these two — otherwise wholly unobjectionable — productions.

Reposted courtesy of Wendy Arons and The Pittsburgh Tatler.