Thoughts about Theatertreffen, May 2-18 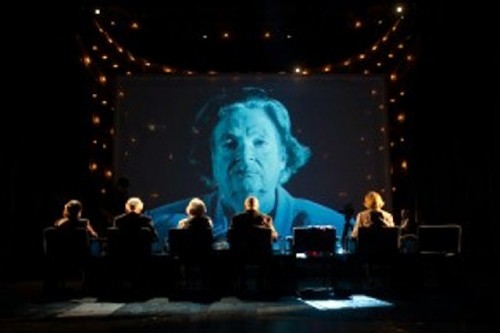 Actors and video projections. All photographs by Reinhard Werner 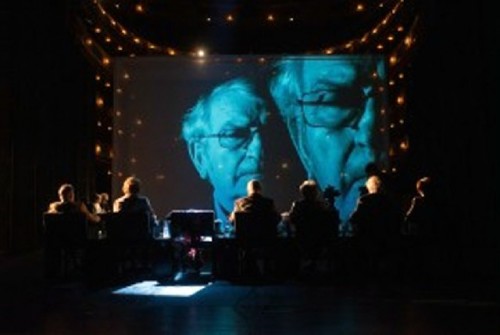 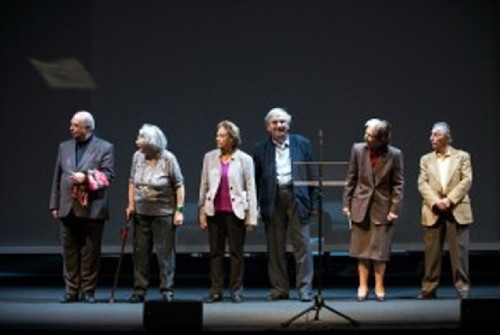 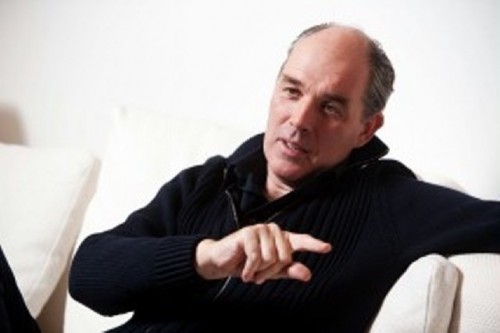 Matthias Hartmann, head of the Burgtheater until 2013.

A project by   Doron Rabinovici and Matthias Hartmann
Burgtheater, Vienna

Late – but not too late - to hear witness accounts on stage as to the atrocities committed by Germans and German speaking nations during the Hitler reign, and to be able to see one of the last offerings of the 51st Berliner Theatertreffen. As always, the selection of performances of 12 theatres in Europe only were chosen from the German-speaking countries. These were my impressions after having seen the presentation of “Die letzten Zeugen” (Last Witnesses) invited from the famed Burgtheater in Vienna.

Considered a high point of the 51st Theatertreffen, “The letzten Zeugen” is an overwhelmingly heart-breaking and heart warming account of six Jewish survivors of the concentration camps sent there by Austrian officials with the help of anti-Jewish and anti-Roma citizens. All of them are between 80 and 100 years old by now, and are on stage, but most of their written memories are spoken by professional actors. Although the stage is empty except for the four actors, one scribe and the six survivors are half hidden behind a see-through curtain, it becomes a powerful venue to hear the accounts.

The dramatic high-point comes when each and everyone at the end of their readings comes forth to comment on the still existing anti-Jewish climate in Austria, actually the rising anti-Semitism and their love for the country despite it all. Lucia Heilman, Vilma Neuwirth, Suzanne-Lucienne Rabinovici, Seija Stoika, Marko Feingold and Rudolf Gelbard went to concentration camps. Ari Rath is the only one who was able to emigrate to Palestine. When all six take their bows, the audience rises as if one for standing ovations and lots of tears. After the performance the witnesses commented in groups of two with a moderator on their experiences in podium discussions. Needless to say that seating arrangements were totally insufficient and even standing room was packed.

This eye-witness project was realized by Doron Rabinovici, the son of the survivor-participant Suzanne-Lucienne Rabinovici, and the former head of the Burgtheater, Matthias Hartmann. The latter did not 'survive' the intrigues rattling this most venerable of Austrian theatre institutions and was forced to resign last year. Since its inception in 2013 at the Burgtheater the production has played to sold out houses, and will most likely travel to the USA as well.

“Die letzten Zeugen” is a docu-drama, pointing to the changing approach to creating works for the theatre. 'Pure' theatre seems to have seen its day, more inclusive productions are the trend. Thus, the 15 plus productions at the 2014 Theatertreffen included performances, installations, podium discussions, a 'Stueckemarkt,' meaning a mentorship and presentation of a young actor/artist, film presentations, and concerts. New this year was the Theatertreffen-Camp, an in-depth forum on the direction of German-speaking theatre. A lot to be seen, luckily I was able to attend one of the most stunning performances of the entire festival.