Dreaming With Alice in Becket 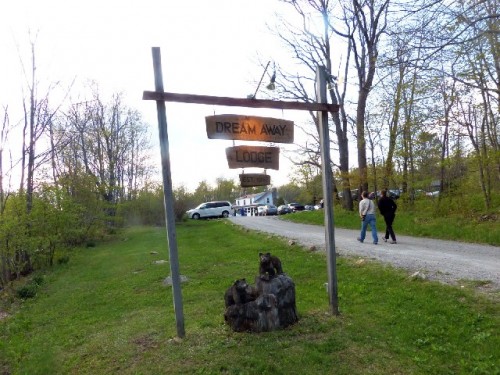 Approaching the Dream Away Lodge in Becket. 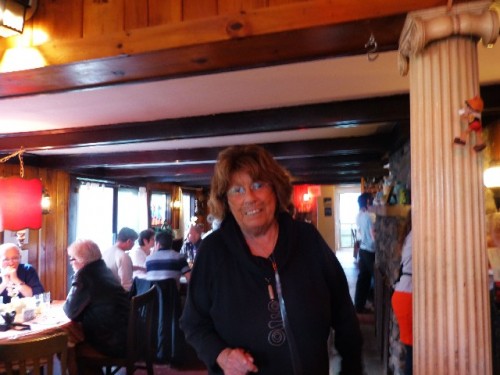 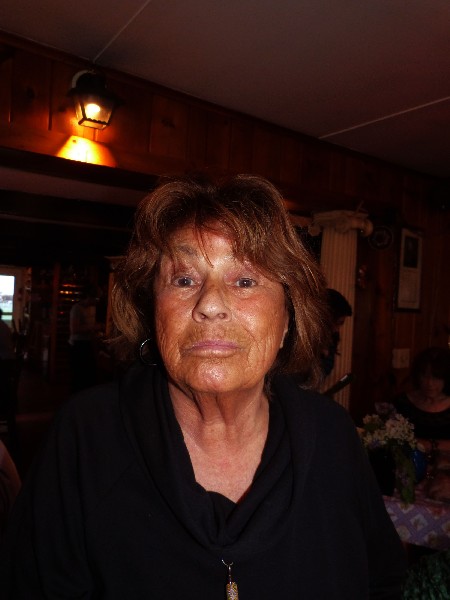 A triumphant return to the Berkshires. 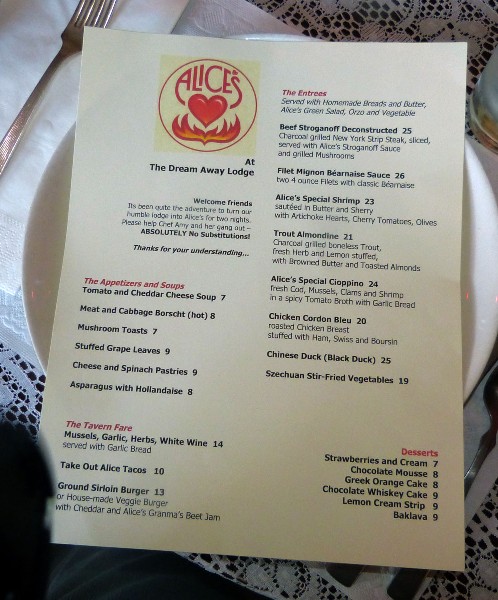 A special menu of Alice’s recipes. 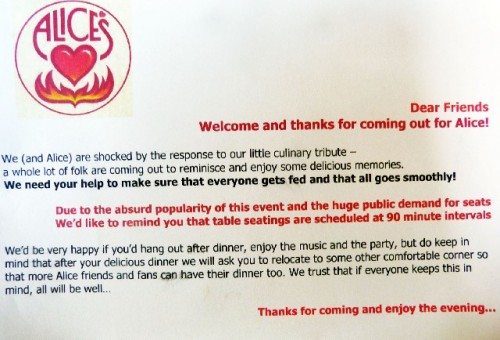 A note with a special request for guests. 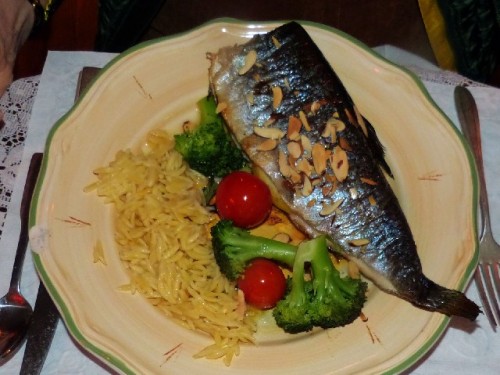 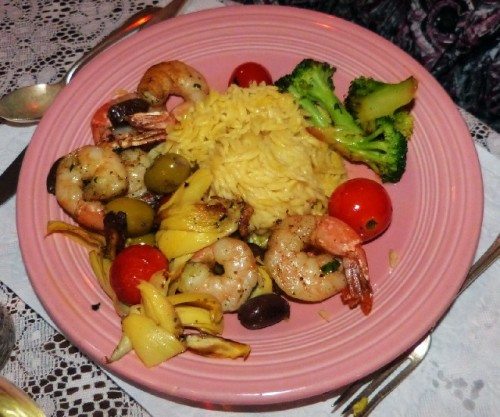 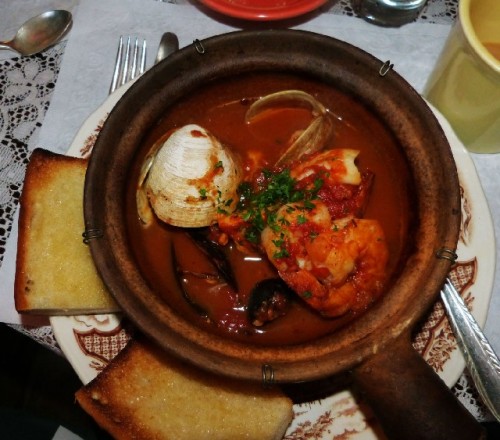 The zesty cioppino had a Portuguese Provincetown flavor/ 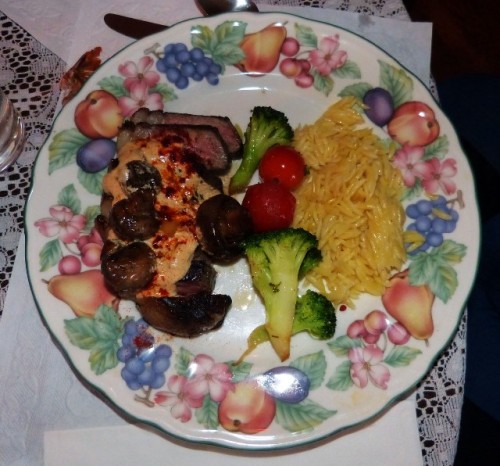 The deconstructed beef stroganoff was disappointing. 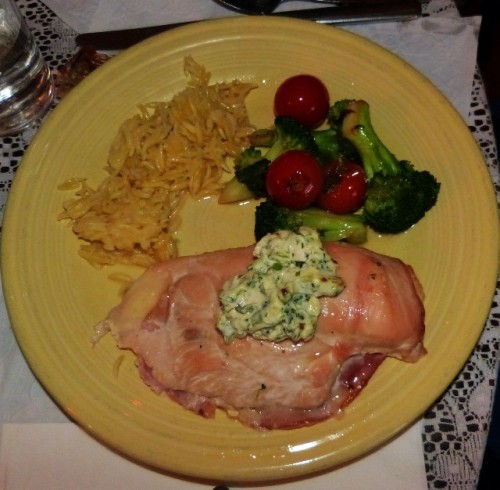 The stroganoff was switched for chicken cordon bleu.

Although we have been there before, even with GPS, we had a hard time finding the legendary Dream Away Lodge in Becket.

We weren’t the only ones.

There was a fork in the road and the sign was confusing.

Another car had stopped and the driver approached asking us for directions.

“We are totally lost and confused” she said. They had just been down the other road and found nothing. She was about to knock on a door and ask for directions. That must happen a lot.

As we waited our friends drove up and stopped for a pow wow.

Taking the advice of the late great Yogi Berra “When you come to the fork in the road, take it.”

Eventually we did in time for the second of three seatings at 6:30 PM.

The parking lot was full and a bearded guy looking very back woods instructed arrivers to park along the road and walk up the hill. Being May there were bugs swarming about. I was already well bitten from the annual chores of gardening. When it itches scratch it.

Our friends were lost.

They took the road less traveled.

We tried to call but got a message box.

I lingered and waited but they seemed total gonzo.

It was colder than I thought so I went back to the car for a sweater.

Our other friends arrived and were seated as I was told to hurry up and join them.

Arriving in the funky old road house, a brothel back in the day, the joint was packed.

A mob scene and total sell out of the hottest event in the Berkshires.

Everyone wanted a piece of the action with the triumphant return of Alice Brock to the Berkshires.

Amy Loveless, the chef of Dream Away, invited her friend, the renowned Alice, of Arlo Guthrie’s anthem Alice’s Restaurant to design a menu and special event.

They got slammed and sold out three sittings each on two nights.

We spotted lots of Berkshire royalty all claiming to go way back when with Alice.

Actually we scored a terrific table for our party of six smack in the midst of the action.

Folks were stuffed into every nook and cranny of the old cat house.

Back in the day Mr. Whitney, then the richest man in America, had a nearby hunting lodge with vast acreage occupying much of the hamlet of Becket.

He invited his one percenter friends up from the city to hang out on weekends and shoot his stocked “wild game.” Kind of like fish in a barrel. All those dudes were outfitted with prime pieces and threads from Abercrombie and Fitch like they were off on Safari.

They were boys only occasions with lots of brandy and cigars.

Boys being boys they wandered over to the well hidden Dream Away for another kind of wild game.

Or so they say.

We settled back, perused the menu, and sucked up the vintage ambiance.

Nearby was a oil painted portrait of a craggy dame what might have been the madam.

Behind the manager’s desk was a copy of that famous, nude, calendar pin up of the very young Marilyn Monroe.

Just in case you were too dense to catch the drift.

I got up to go look for my old pal Alice thinking she might be in the kitchen.

She was busy table hopping greeting one and all.

I gave her a hug and copped a feel just like that first night we met back in the last century.

It took a moment for her to recognize me as she studied my gob.

There was that good grief, my how you’ve changed, aha moment.

“Move over” she said referring to that first night in the sack crashing at Jim Jacob’s crib in Cambridge when she was on the lam from domestic bliss.

Then “Thanks for the nice writeup.” Turning to our table during introductions then back to me “Next time do your homework.” To our guests “Imagine he’s asking me questions?” The noive not knowing the facts.

Speaking to my wife about that infamous first night in the sack “I told him roll over and not to touch me. He did.”

Them was the days.

In addition there was a note on the table stating that Amy and Alice were blown away by the response. So would we be kind enough to vacate after 90 minutes and allow for the next seating of all of her Berkshire friends.

That wasn’t possible actually as the kitchen and wait staff were slammed. A waitress, not our server, arrived with two plates. One was correct the other was not. We urged our friend to eat while it was hot.

Good advice because it was some time before our orders arrived after a first course of Alice’s Special Salad and a basket of rolls and butter.

We were in no hurry and the room was just electric.

What a great buzz and vibe.

We saw food coming out to other tables. The blackened half a duck looked interesting. It had been my second choice.

With apologies the food eventually arrived.

We were in no hurry and much enjoyed a lively conversation with friends we had not seen through an epically long and difficult Berkshire winter.

On this night spring was in the air with talk of plans for the coming glorious season.

After dinner we compared notes on the food. We are identified as Guys and Sweetie Pies.

SP1 Alice’s Restaurant was really a wonderful evening for most of us. We had fun. My trout almondine was very nice. My vegetables were perfect. (florets of broccoli and cherry tomatoes, with orzo which came with the entrees) The broccoli was a touch too hard but really good for me. I enjoyed my dish very much.

SP2 It was a thrill to meet Alice in person. It was a special occasion for her. I had shrimp and it was quite good. The vegetables on the plate were a little sparse.

SP3 I also had the trout almondine. It was nicely prepared but perhaps could have been cleaned better as I had quite a few bones. The flavor was lovely and just the way I cook it at home. I enjoyed it very much.

G1 I enjoyed meeting your old friend Alice. In the past you have regaled us with many tales some of which perhaps are not fit for mixed company. I had the cioppino which I ordered because she lives in Provincetown. There’s a whole fishing fleet there of Italian descent. (Portugese actually) So she knows fish. It was very good. Nicely spiced and not too hot. There was an interesting combination of a tomato base and herbs. There were shrimp, mussels, clams and fish. There was toasted garlic bread which is appropriate. We didn’t get a side of vegetables which the menu indicated came with the entrees.

G2 I also opted for the cioppino which was superb. The presentation in its own ceramic pot was enjoyable with slices of toasted garlic bread on the side for dipping. I swear that I tasted squid in the broth although the dish did not include it. That might have come from the mollusks. I also could not quite identify the distinctly Mediterranean herbs and spices with just a touch of heat. Once the clams were consumed and removed at the bottom of the dish were several pieces of fish. Overall it was a totally successful unique dish.

G3 I’m the guy with the wet blanket. I ordered the beef stroganoff deconstructed whatever that means. It was a bad choice. The meat that they mentioned on the menu. (Charcoal grilled New York strip steak, sliced, served with Alice’s stroganoff sauce and grilled mushrooms.) It was not what was served. It was supposed to be prime beef and this mostly came with fat. It wasn’t lean as it should have been. So I sent back the dish.

Then I got the chicken cordon bleu. The waitress understood the problem with the stroganoff. She apologized and let me order another entrée which was served as soon as possible. I was also comped for a dessert. That was the proper protocol.

I’m the only one who ordered flesh. I was the turf in the surf and turf. You all ordered seafood. Both meats, stroganoff and chicken, were very tough. Still I walk out of here with a smile on my face for great ambiance and the company is 100% of the experience. I’m glad we came for a very special occasion. It has been great fun.

Other tables were turned but there seemed to be enough seating. Actually arrivals were staggered so the three seatings were less evident. Nobody seemed to be waiting.

Our service was a bit chaotic as we enjoyed dessert. The chocolate mousse was a solid hit at our table with touches of zest and a rich, creamy, chocolate density. We also tried the superb Greek orange cake which was layered and flaky.

There was a motley band in the lounge playing an odd combo of blues and blue grass. The room was packed.

Lingering to leave I encountered Alice working the late shift.

Everyone got a personal greeting.

I asked where she was staying.

“Upstairs” she said. “I could never find this place again.”

She seemed exhausted when I asked if she had fun.

Holding back from losing it while looking deep into me.

She said with a gasp “It’s been overwhelming.”