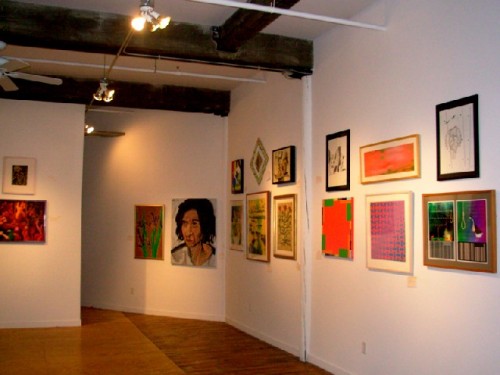 The installation of the Berkshire Salon. 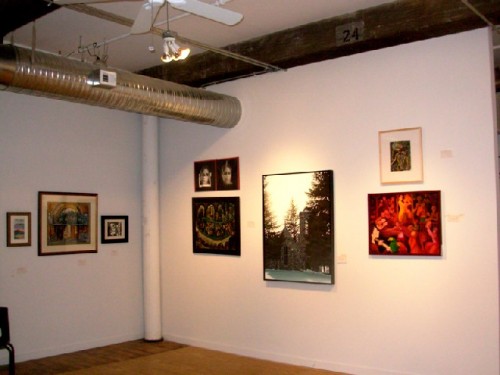 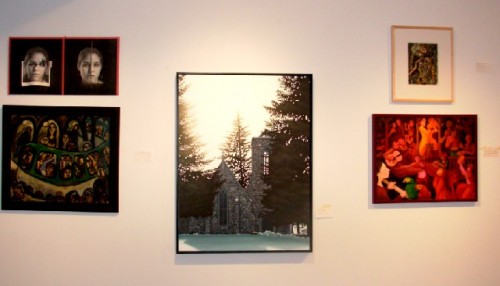 A cluster of paintings. 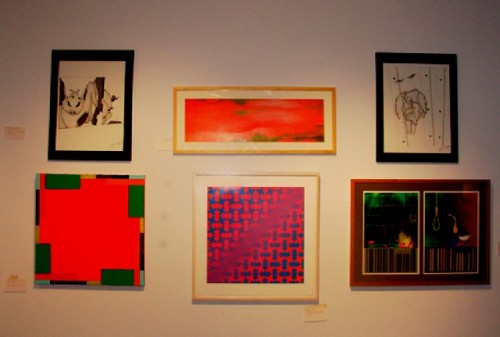 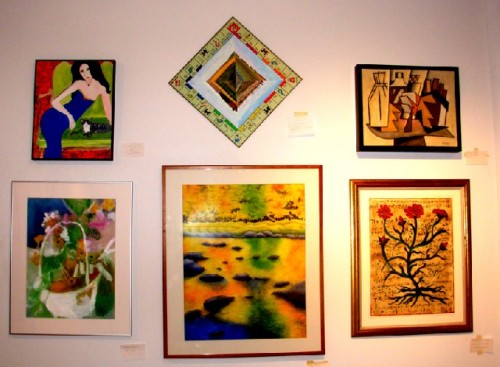 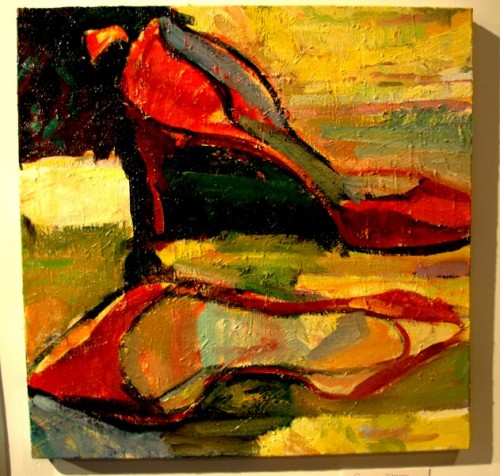 Whose Shoes by Sharon Carson. 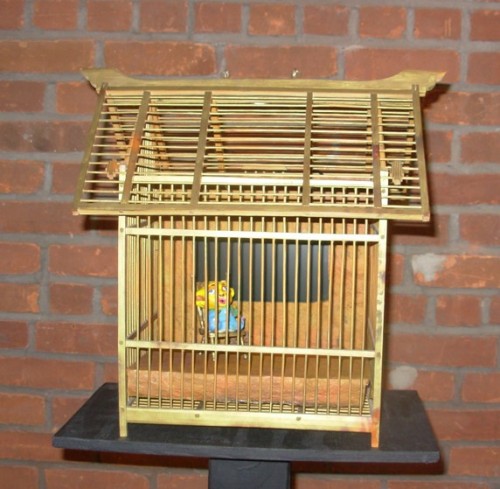 Commencement of Joy by Marianne Petit. 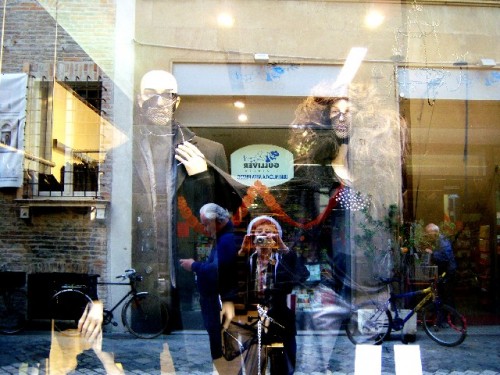 Bicycles in Ravenna a digital image by Astrid Hiemer. 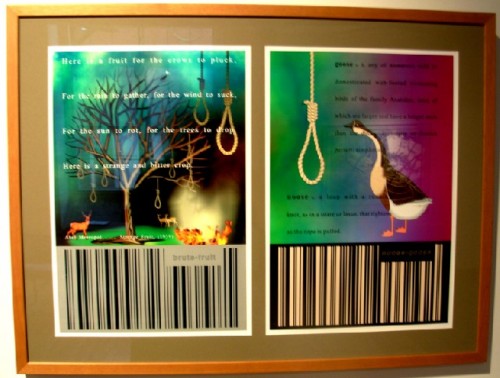 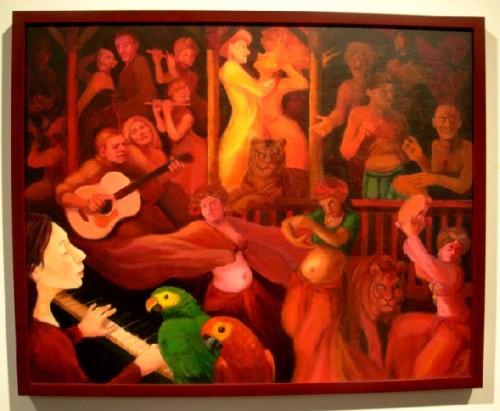 Dance to Her Red Hot Tunes by Brigita Fuhrmann. 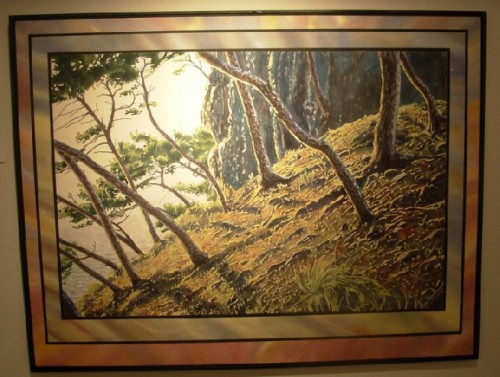 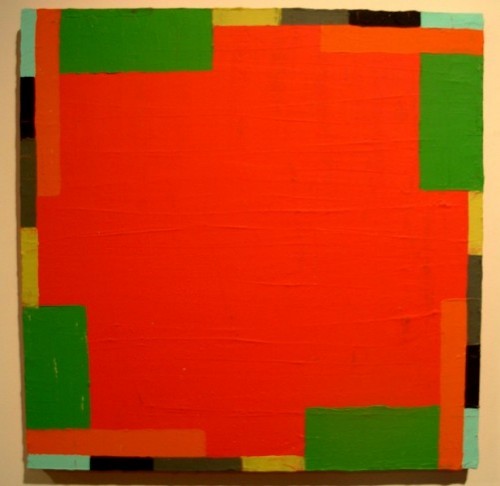 Round and Round by Jeff Hudson. 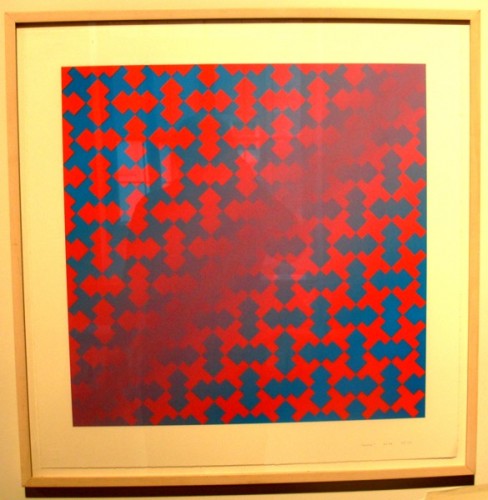 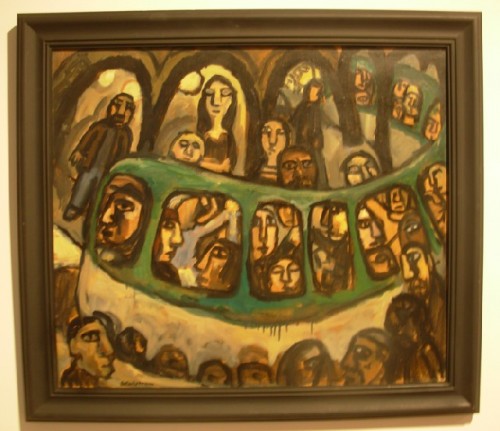 The concept of the Salon, an annual exhibition, originated in 19th century France. In the era before the development of commercial galleries representing artists, this enormous, government sponsored exhibition was the primary means by which a young artist gained all important exposure and recognition.

The overview of these dense and lively surveys was to provide the best of what was being produced in all media including primarily painting and sculpture. There was no specific organizational theme and so the results were eclectic and it was up to viewers to sort out works that were most deserving of critical comment and debate.

The selection process was undertaken by jurors drawn from the membership of the French Academy hence the term academic. This describe work that most readily conformed to the taste and style popular with the general public. Famously, the most experimental and progressive work was routinely rejected by the conservative jurors of the salon. Eventually, so many of the most interesting and progressive artists were excluded that the experiment was undertaken to organize a separate exhibition a Salon des refuses which would include all of the work rejected by the official jurors. Not surprisingly this exhibition, shown simultaneously with the Official Salon, created far more interest and excitement. Historically, many in the exhibition of shunned artists included the greatest artists of their time known and are adored by the public today at the French Impressionists.

Drawing from this tradition the artists of the Eclipse Mill have opted to open their annual series of exhibitions with the Berkshire Salon. The lively and dense exhibition, hung Salon Style, which means a grouping and stacking of objects, includes all artists who submitted their work. There was no jury process as all were welcomed.

Some 47 individual artists have responded to the invitation to exhibit their work. This has produced a lively and fair overview of what is being created in the Berkshire region. There are artists who are well established as well as individuals who have never shown their work to the general public. So there is a mix of the familiar as well as some true discoveries. This Salon and installation places everyone represented on an equal footing. It is also resulting in creating for the gallery a wider range of potential visitors. This is an outstanding effort to really expand the definition of a community of artists.

The majority of the exhibiting artists are from the immediate vicinity. There are a dozen artists who reside in the Eclipse Mill who are showing their work. Artists from North Adams, Adams, and Williamstown are well represented. Also there is a strong representation of artists from Vermont and New York State. An artist from Cape Cod has participated as well as another from Arlington, a suburb of Boston. It was left to artists to decide just how far they were willing to drive in order to participate.

Overall the quality of work on view is outstanding. Accordingly, it is challenging to mention just a few of the highlights.

From Greylock Arts, in neighboring Adams, co director, Marianne Petit is showing a multi media work. Ed Carson, an Eclipse artist, who has a current one man show at Harrison Gallery in Williamstown, is showing along with his wife, Sharon Carson. Jeff and Jane Hudson, who are owners of the North Adams based, Hudson Antiques, which has a branch in Mass MoCA, are both exhibiting. Pennie Brantley and Robert Morgan, realist painters who will show at the Eclipse in August, helped out with the installation and are participating in the Salon.

In establishing ground rules for the Salon it was decided to set an age limit of 21. The intention was to focus on adult artists. But the group was appealed to by the mother of the 19 year old Andrew Klass. She signed his application form so he was the exception to the rule. Next year we will accept those applications with a parental signature. Andrew is starting as a freshman at nearby MCLA and this is jump starting his ambition and career as an artist.

For many years Robert Henriquez, who recently moved full time to Pittsfield, worked for CBS Broadcasting. He initially came to the area to participate in the workshops of the Contemporary Artists Center in North Adams. He will be showing a new series of digital works which were some twelve years in development. We are excited to be the first to show this work.

Similarly Gail and Phil Sellers, who operate River Hill Pottery in the Eclipse Mill, have developed a new series of small relief tiles which will be exhibited for the first time in the Salon.

Visitors may anticipate many surprises. As artists brought in their work they were asked how they had learned of the Salon. Many indicated that they read about it in a Transcript article by Jennifer Huberdeau. She is also participating in the exhibition. It is also enjoyable to once again see works that have been shown in the Hudson's gallery or during Open Studios. Once again we are enjoying the paintings of Brigita Fuhrmann and the Op images of Richard Harrington.

Based on the strong response to the Berkshire Salon there are plans to present this as an annual event. Check it out.