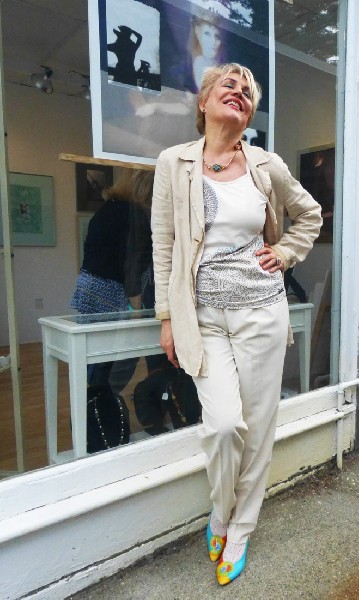 Matuschka outside Sohn Fine Art in Stockbridge during the vernissage of her exhibition. Giuliano images. 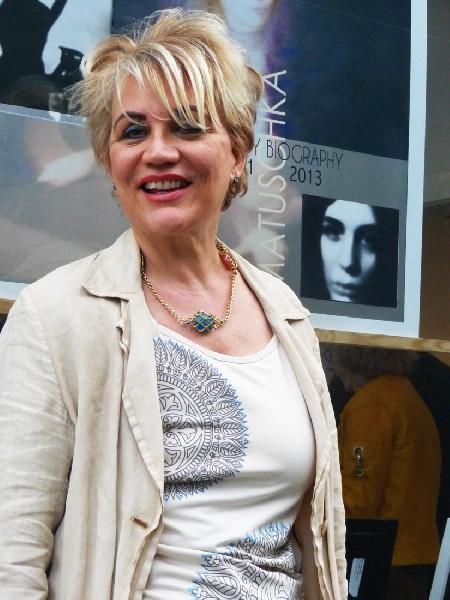 Responding to the recent news about Angelina Jolie.

I was taking a bath at 8am when the phone rang and I got the news. A reporter from Inside Edition was calling to request an interview.  About what I wondered this early?

I’m an artist and I’m not running for president.

What was more unusual than the early phone call, was the content of sensational news. I was asked to comment on how  Angelina Jolie was joining the growing ranks of high profile celebrities opting for prophylactic mastectomies.

At this ungodly hour, I needed to be intelligent about the matter.

I had a mistake-to me (my pun for mastectomy) almost precisely 22 years ago when I was 37. My mother died of breast cancer when she was 41. So the curent discussion about prophylactic mastectomies, gene testing, new types of reconstruction, prevention, and all the artwork created when the disease du jour strikes the ambitious, has been cathartic.

Breast Cancer has defined both my life and art for the past 20 years. This occured quite by accident, because my timing could not have been better when I was diagnosed.  I was afflicted with the disease--- much like my mother had been--- when treatment and reconstruction options were basically the same and didn’t change during the 20-year spread from her death to my deathly discovery in 1991.

As a result of many women (including myself) who were disappointed, angered, and frustrated by the lack of medical advancement, awareness, treatment options, and prevention during those decades, we felt compelled to do something.

We shouted, bitched, barked, demonstrated, protested, trucked our stuff to Washington DC and eventually, we were heard.

Of course many good things came from our kicks and screams. One very perplexing item stands out, however, the comodification of the breast. How much is a breast worth?  How to make your breasts more beautiful now that you’ve got cancer? How to possibly prevent the disease from striking your bust line by lopping them off in the nick of time?

I may be incorrect, but there is no other disease with this option. To have a gene test and then remove the possible culprit before it becomes a problem. Imagine a gene test, which will indicate to men, whether or not they may come down with testicular cancer? Their option? Remove both testes! Well we all know why that won’t happen. Modern medicine has not figured out how to reconstruct, replace, and make better balls.

Before my interview on Inside Edition occurred, a friend on Facebook posted a link from an article written by a woman who had just opted to have both breasts removed because she tested positive to a “carrying”  a “faulty” gene, BRCA1.  “Which sharply increases both her risk of developing breast cancer and ovarian cancer.” I had to read this, as I needed to be updated about current events now that I was to be interviewed on the subject.

A few paragraphs into the piece I re-read what the woman wrote:

“My chances of developing breast cancer have dropped from 87 percent to under 5 percent. I can tell my children that they don’t need to fear they will lose me to breast cancer.”

Ironically, I didn’t know who the author of this article was until she mentioned her husband, Brad Pitt.

Let’s back up for a moment. While I very much appreciate pro choice- I have problems with financiers, insurance companies, and over kill surgery.

First off, you may inherit the bad gene but still not get cancer.

Secondly, you may have your breasts removed but get cancer anyway. Cases have been reported every year whereby the primary source of breast cancer was never found. A woman should be aware that recurrences occur in the chest wall and other parts of the body even after a breast is removed. I should know this as I watched my operation which was filmed and after the screening I commented "This is barbaric surgery. They can’t get all the breast tissue out."

I quote from medical literature “However, no one can be certain that this procedure will protect an individual woman from breast cancer. Breast tissue is widely distributed on the chest wall, and can sometimes be found in the armpit, above the collarbone, and as far down as the abdomen. Because it is impossible for a surgeon to remove all breast tissue, breast cancer can still develop in the small amount of remaining tissue.”

And thirdly,  if you inherited the bad guy gene and get breast cancer you may still live, survive and thrive. I am proof in the pudding, minus the whipped cream.

Angelina’s very well written disclosure of her choice indicates to women that by removing her breasts, there is no chance that her children will see her die of breast cancer. While I hope this is true but it is not always the case.

I understand Angelina’s fear quite well. Even though I didn’t test positive for the gene, and am certainly not in the same category as she is, the fear I inherited from seeing my mother dying of  breast cancer cannot be under estimated. Angelina also saw her mother die of ovarian cancer and the devastating effects it had on her family.

If Angelina had a positive role model, i.e. a mother who survived cancer, her recent operation to remove her breasts may not have occurred. Who knows?  I have to respect her opinion, but also ask, what if?

What if there was still another choice? A better option, and one for all?

One issue that has not been addressed adequately is insurance coverage and who can afford gene testing. I am not sure all insurance companies cover prophylactic mastectomies, as I myself, am still having problems getting my health insurance to cover reconstruction 22 years after the fact.

But let’s be blunt. How one views breast cancer, reconstruction, or prophylactic mastectomies, there is no right or wrong answer. Yet. There is though, a very strong business of selling desires as reality in the world we live in.

Sure, you may get perkier, bouncier, younger breasts after breast cancer, or after prophylactic surgery. What a trade off? But one should never perceive this as the absolute path to a clean bill of health or that in fact, helps generations to come.

The establishment, medical community, and beauty industry have pushed the fear factor of breast cancer to such a degree that it seems that the things that destroy us include: Politics without principle, science without humanity, and medicine without logic

These troubling paradoxes all seem to be coming true in this generation.

Isn’t there always a better way?

(Matuschka is a former model and artist who lives and works in New York City with three parrots. Through July 1 her exhibition Matuschka: A Body Biography is on view at Sohn Fine Art, 6 Elm Street, Stockbridge, Mass. 01262.)