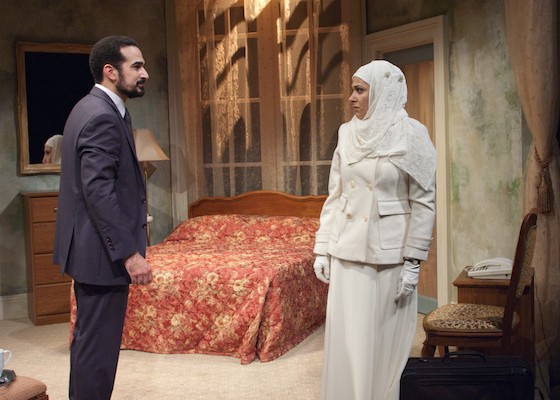 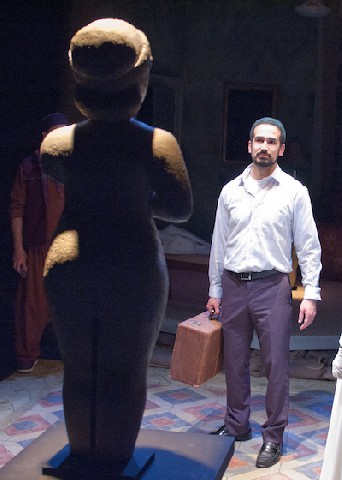 Timeline Theatre's Chicago premiere of Inana by Michele Lowe is a ripped-from-the-headlines love story. And it also reminds us that Americans are sometimes the barbarians at the gates. In this case, the gates of an Iraqi museum of cultural artifacts. Kimberly Senior's direction succeeds in making this a lesson in recent history as well as a memorable personal story.

Yasin Shalid (Demetrios Troy) is chief of the Mosul Museum. He and his arranged bride Shali (Atra Asdou) have just arrived in London on their wedding trip in February 2003. The story moves back and forth between their hotel room and Mosul where Yasin organizes the packing and shipping of cultural and historical artifacts to the National Museum in Baghdad, where steel-lined vaults are buried deep in the ground. The past scenes acquaint us with the back stories of both Yasin and Shali and illustrate the worries of everyday Iraqis about the impending invasion by the U.S.

The most important artifact in Yasin's care is Inana, a 3000-year-old one-armed statue of the goddess of love and war. Inana was damaged and her arm lost during an earlier attack. (The Mongols took the only other statue of Inana 800 years ago, Yasin says.) His friend, Abdel-Hakim (Frank Sawa), a bookseller, is gradually moving all his books to Tehran, where he will open a library. ("What can I do? If the Americans invade, I could lose them all.") He has already suffered from Saddam Hussein's government repression; his fingernails were pulled out because he displayed a drawing of a cherub in his store window--a study for a Titian painting. "It's the second time this week the goons have come," the bookseller says. "Every book that contains a picture of anything with a heartbeat, even a cockroach, must go into storage or they'll burn it."

And yet, Yasin says to Abdel-Hakim: "You place a book of God's creatures on your shelf and get your nails torn out. [The artist] Emad forges dozens of antiquities and gets away with it every time. Where's the justice in that?"

Yasin was married before but his first wife was taken by Hussein's son, Uday, and was never seen again. Yasin says he hasn't been interested in remarrying, but works out an arrangement to have a duplicate Inana created by Emad Al-Bayit (Anish Jethmalani), who is Shali's father. Emad tells Yasin, "I favor her above all my children but she's too smart for her own good. She's teaching women to read, groups of women in secret. Too dangerous. I want you to take her wherever you like and never come back." The deal is a satisfying romantic plot device. The honeymoon trip to London will mean a much longer stay and a duplicate Inana will ensure that the real one won't be found.

Troy provides a warm, smart performance as the dedicated museum curator and new husband. Asdou is sad and charming as his new wife; their relationship is sweet and nuanced. Michael B. Woods adds a few light-hearted scenes as the hotel waiter who bonds with Yasin over a TV football match. The rest of the cast is also very strong, especially the well-known Chicago actor Anish Jethmalani.

The setting designed by Collette Pollard divides the playing space between an ordinary-looking hotel room on a raised platform and an open area tiled in blue, red and cream in an Arabic pattern, where the back story scenes take place. Samantha Jones' costume designs are done with Middle Eastern style, especially the women's costumes. Shali's wedding costume is a long white dress with a stylish short white jacket.

Most of the seven actors have Middle Eastern or South Asian backgrounds, and dialect coach Eva Breneman has done a good job of smoothing out their accents so that they sound authentic, at least to an untrained ear.

Playwright Michele Lowe started out as a journalist with a degree from Northwestern's Medill School of Journalism. Her plays have been produced around the U.S. and in other countries. Both Inana and Victoria Musica were finalists for the American Theatre Critics Association/Steinberg New Play Award in 2010, the first time that a playwright was nominated for two plays in one season.

Inana continues at Timeline Theatre, 615 W. Wellington, through July 26. Running time is 90 minutes with no intermission. You can see it at varying times Wednesday through Sunday. Tickets are $39-52 and can be bought online or by calling 773-281-8463, ext. 6. Pre- and post-show discussions are held on a number of dates.