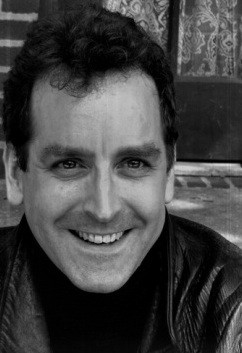 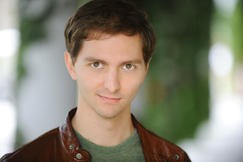 Kevin Stanfa, wounded in the Civil War in more ways than one. He was also in jailer in "The German Bitch" 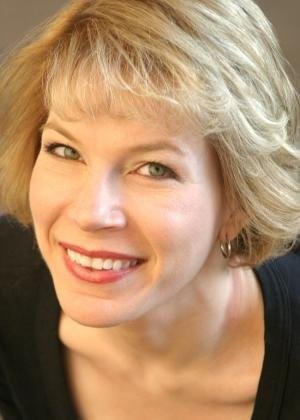 We barely get to see the soused Angel played by Anne Fizzard but she creates an indelible image.

The Workshop Theater was founded over fifteen years ago in New York to bring creative artists – actors, writers and directors – to talk and read new plays.  It has grown to include 150 artists and produces plays in increasingly finished form.

Their spring offering was five one acts under the umbrella title “You are Here.”

The first play by Glenn Alterman features a gay couple who lived in the fantasy world of DC Comics before relocating to Key West, where a fantasy parade is about to pass the front of a bar they run.  Still in the shadow of the caped hero and his kryptonite counterpart, the couple muses on gay progress from the darkness to the light.

Four of the evening’s plays were fantasies about life in the United States as we veered into the future just after the Civil War.  One piece featured a St. Petersburg jail cell about a hundred years earlier, when the pretend-liberator of serfs looks stronger than his queenly captor.

On Bloomingdale Road in Manhattan, Mark Loewenstern depicts an aspiring New York real estate entrepreneur who owns houses and a farm at what will be 76th and Broadway.  About to undergo tumor surgery he discusses his estate with his son, who has returned limping from the Civil War injuries and would clearly prefer to drown the war in drinks at Delmonicos.  His sister, whose husband would inherit because she can’t as a woman, is a Cordelia here.

Playwright Dana Leslie Goldstein brings us to Ellis Island where two sisters who emigrated with their mother from Russia, search for their names on a new wall. One sister is desperate to find her father, who did not leave with them, but was supposed to follow and never found them if he did.

In Russia, even more ghoulish than the people who lined up to see Bedlam inmates, aristocrats were allowed to visit prisoners on death row the night before they were scheduled to die.  Pugachov was jailed in 1775 a hundred years before the Civil war in the US.  His rebellion was the most successful Cossack rebellion.

The playwright David M. Mead fantasizes a meeting between Catherine the Great and Pugachov, who has all the charms of Lady Chatterley’s Lover. Although he is shackles and filthy, Catherine can’t resist his sexuality.  Catherine, here “the German bitch” had been a minor German princess before she arrived in Russia. Mead develops the idea that her submission to her limp wristed husband so she could have a son, Paul, shows how maternal she can be.  Now Pugachov says, as he goes off to be executed, you must be mother to Russia.

Katrin Hilbe, a gifted director who describes herself as a cross between Kansas and Lichtenstein, (Dorothy and Pearl Mesta?)  is greatly gifted with characters of power and force.  She brings forth a tour de force performance by David Palmer Brown, who goes head to head with wily Susan Izatt playing Catherine.  You know who dies.  But the same person seems also to win.

Bob Manus returns us to actors, John Wilkes Booth and his brother in a bar.  It is early on the evening Booth would take out the President.  Booth, out of his wildness and  talent, imagines that the bullet he proposes to shoot will mark his name in history forever.  It did.

Fantasy was everywhere: in Key West, the upper west side of Manhattan, the waves of ever hopeful immigrants, from Catherine’s Russia and the world, and, of course, the iconic Lincoln, who like John Kennedy becomes myth in his assassination.

The close quarters of the Workshop Theater’s main stage are calibrated carefully by the directors.  Actors at once make you feel part of the proceedings, but also that the characters are larger than life and dramatic.    A wonderful venue to engage in theater.