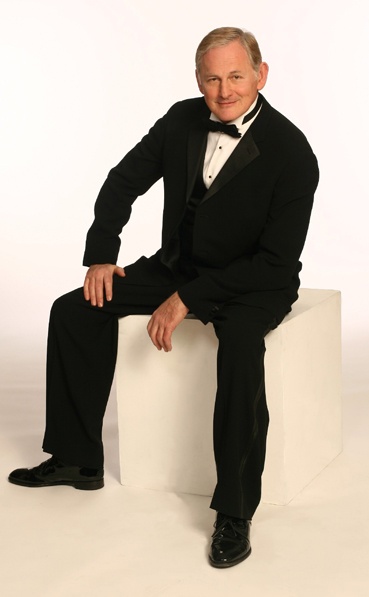 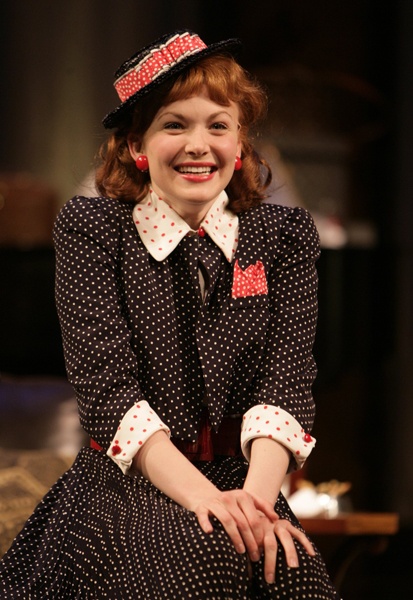 It appears that the aspiring actress Daphne Stillington (Holley Fain) spends the night with Garry because she forgot her latch key. 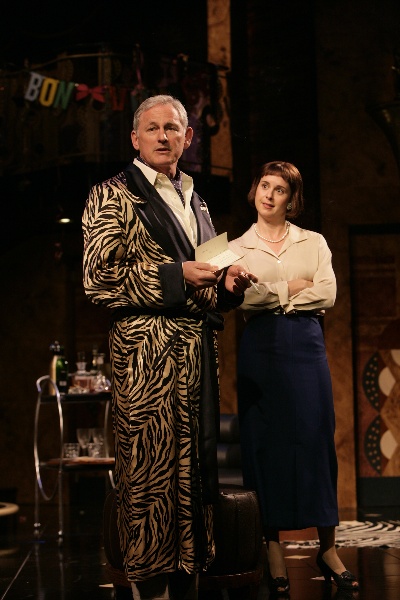 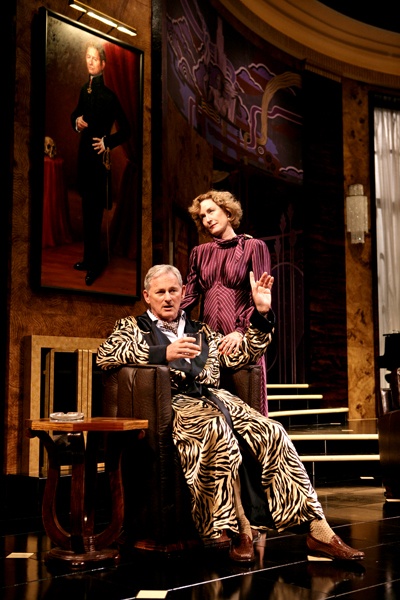 Garry is always surrounded by women. 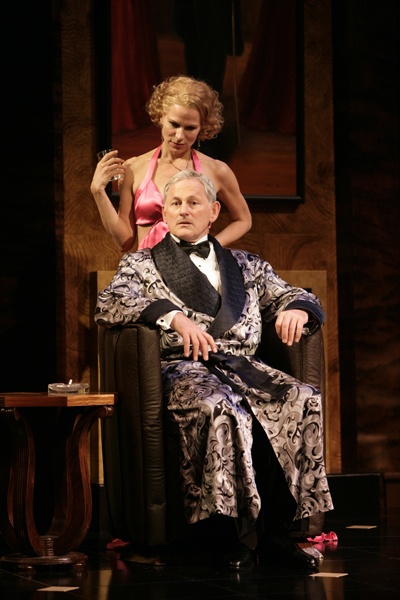 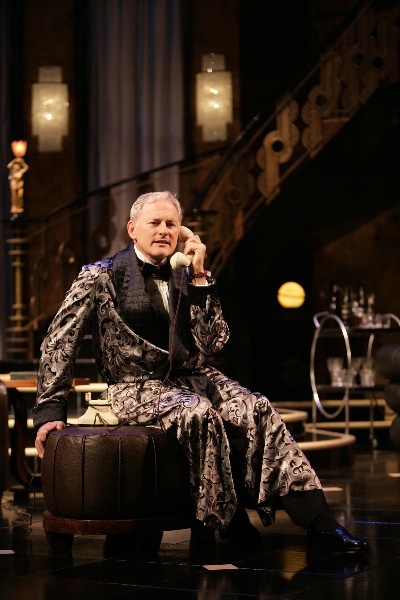 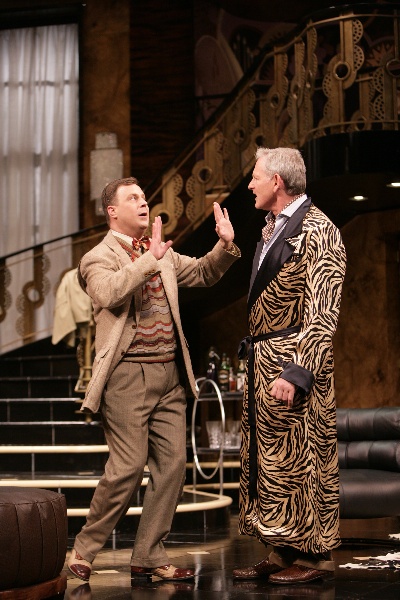 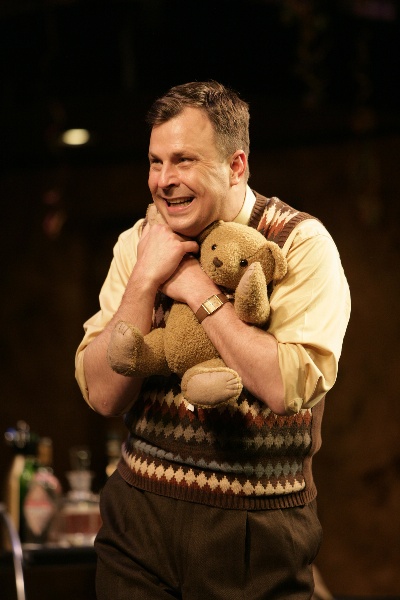 Roland plans to join Garry on tour in Africa. 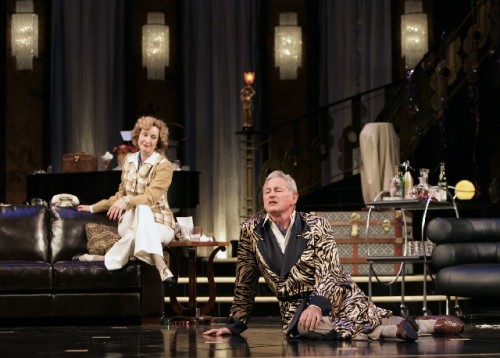 Liz and Garry are reconciled. 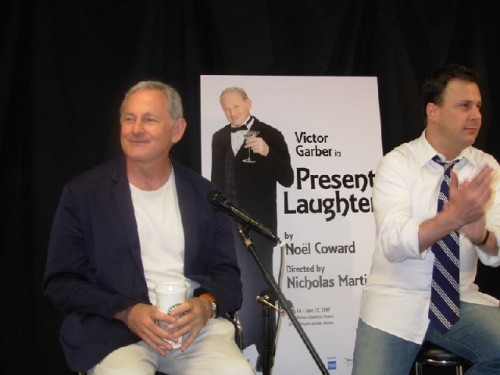 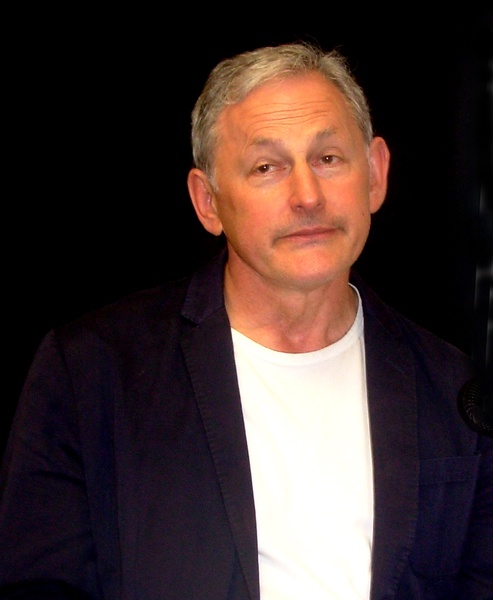 As Garber explained this is Coward not Chekhov. 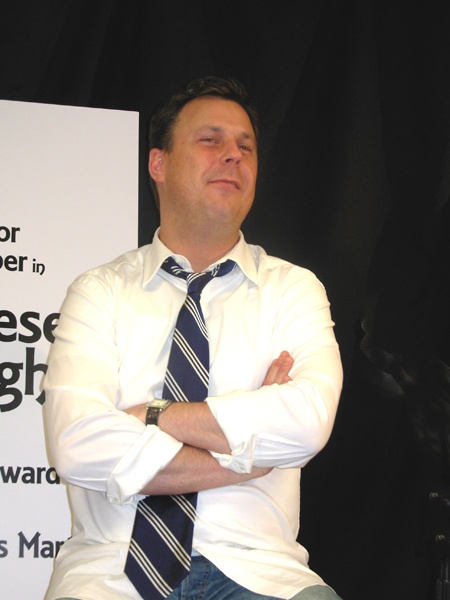 Brooks Ashmanskas was hilariously over the top.

There is an internal dialogue and subtext in Noel Coward's witty comedy "Present Laughter" which comments on his own midlife crisis and views of  theatre. The vehicle for this self reflection is the actor of a certain age Garry Essnedine (Victor Garber) and a rather silly buffoon of a playwright, the wonderfully ridiculous Roland Maule (Brooks Ashmanskas). The absurd fan and would be playwright has begged Essnedine to read his script. Sufficiently provoked Essemdine tears it to shreds and launches into a screed about how the young author should dash off twenty or more plays in the hopes of getting just one produced. Instead of being put off it only stokes Maule to a level of even greater devotion now that he has gotten Essendine to strip away layers of polite formality and get down to the gritty truth.

In the midst of all the clever banter and ridiculous situations that surround the actor with fans, groupies, an estranged wife, apathetic retainers, smarmy agents and a groping lover, we can feel the pain of Coward himself. Despite the gay laughter we sense that he knew his foppish, pretentious limits and, from time to time, has the actors remind us that we are not seeing Chekhov. By the way, the Huntington presented "The Cherry Orchard" earlier in the season. Essendine accuses Maule of writing an inscrutable play. But Maule counters that the works that he routinely stars in are mindless crap and this is the chance to achieve  real depth that will sustain his reputation and memory.

Is this a cry for help? Did Coward see himself as an intellectual lightweight? A flitty butterfly compared to the gravitas of a Chekhov? The argument of the relative importance of comedy vs. tragedy goes back to the Poetics of Aristotle who proclaimed that tragedy outweighs comedy and that notion prevails to this day. We enjoy an evening of comedy, are relieved of our daily cares and woes, but the experience and insights tend not to linger with us.

Right now, for example, it is interesting to compare two superb productions by British playwrights: The  Huntington's farce by Coward and the serio-comic, existential "No Man's Land" by Harold Pinter across the river at American Repertory Theatre. The plays also say a lot about the mandates of two superb but very different repertory theatres. The Huntington represents a traditional approach to contemporary theatre while ART embraces the avant-garde and often deconstructs its productions.

So, while last night we enjoyed a superb and witty evening in a truly wonderful production of Coward, a triumph on every level, the morning after there is not that much meaty substance to reflect upon. While a week later the Pinter play lingers and provokes. Perhaps we are unfairly comparing apples and oranges. They are both spectacular experiences. Given the chance to view just one of the two productions would represent a Solomon decision. But, truth is, I would never forgive myself for missing the Pinter. It is important and memorable in a way that the Coward is an evening of lighthearted fun. The question is whether it is more meaningful to laugh or cry?

If the answer is laughter then Huntington is your choice, hands down. Last night the audience just howled through many moments. Particularly the exchanges between Essendine and Maule. While Garber presented his lines with superb, urbane timing and legerdemain, Ashmanskas was over the top with a lot of sight comedy and deft moves that went far beyond the script. While Garber is the star of the show, and rightly so as he truly carries the long play through never faltering acts, every time Ashmanskas was on stage the level of hysteria ratcheted up several notches. We found ourselves longing for his reappearance. One would tend to say that he was a scene stealer but the chemistry between the two actors indicated that they were having a blast and were truly amused at how far they could push the envelope. Garber was a glib and sophisticated Dean Martin to the outrageous nonsense of Ashmanskas's Jerry Lewis.

All of the casting was wonderful. Each actor took full advantage of every opportunity. As the feisty, cigarette smoking, droll, maid and cook, Miss Erikson, Nancy E. Carroll delivered wonderfully pithy moments. The women were uniformly superb from the ingÃ©nue Daphne Stillington (Holley Fain) who has spent the night having met Garry at a party because she "forgot her latch key" to Joanna Lyppiatt (Pamela J. Gray) the wife of his agent who also "forgot her latch key," to the estranged wife Liz, (Lisa Banes), and the plain, faithful secretary, Monica Reed (Sarah Hudnut). While Coward writes well for the women his men are less compelling. There is little depth to Henry Lyppiatt (Richard Snee) and the other member of his management team, Morris Dixon (Mark Victor) who appears to be having an affair with Henry's wife now throwing herself at Gary. Fred (James Joseph O'Neil) just serves drinks, opens the door, and answers the telephone.  The women drive the play while the men (other than Maule) just advance the plot.

The technical aspects of the production are fabulous. The art deco, upscale set by Alexander Dodge is wonderful in every detail including some spectacular murals. The lighting by Rui Rita was perfect. But most of all the costumes of Mariann Verheyen were marvelously apt. Garry has a terrific assortment of dressing gowns including one with a tiger striped theme to get him in the mood for the six month long African tour he is about to embark upon. The women were dressed with great finesse. The costumes perfectly complemented their roles from whore, to silly young girl,  straight laced secretary, to sophisticated former wife, the one that got away.

Clearly the audience was amused and enchanted by a perfectly delightful evening of theatre. The standing ovation was richly deserved. Overall, this was an absolutely flawless production directed with great skill by Nicholas Martin. It was a great way to end a season at the Huntington during its 25th year. I'll drink to that. Cheers.