Lettice and Lovage by Peter Shaffer 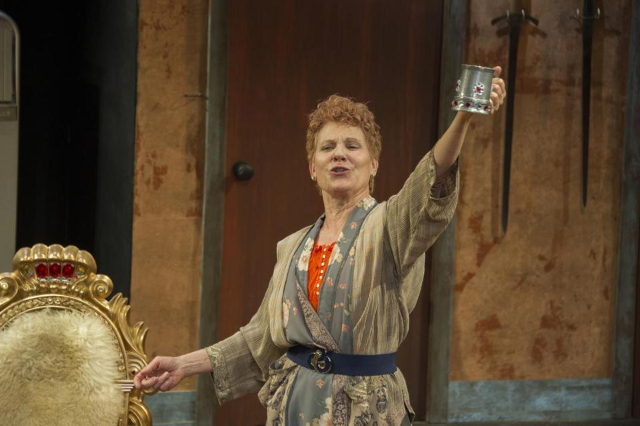 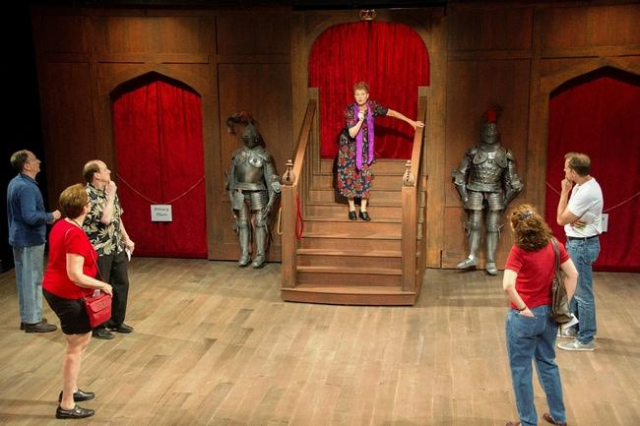 The notable feature of an otherwise drab historic home in Wiltshire County, England is its ersatz grand staircase with some fifteen steps.

The spinsterish Lettice Douffet (Lindsay Ann Crouse)  expounds on the house to a group of tourists. Part of her presentation entails an incident in which Queen Elisabeth I tripped on the pearl encrusted hem of a voluminous gown.

Headed for a nasty fall and a knock on the noggin she was deftly saved by an attendant who was knighted on the spot.

Or so it seems.

Another group of tourists is ushered in and the patter is reenacted.

Upon hearing her spiel for the second and third time I was braced for a long evening of the play written as a vehicle for Dame Maggie Smith by Peter Shaffer (Equus, Amadeus).

But, hold on, her docent script constantly changed. Pearls were upgraded to diamonds and the incident became ever more elaborate and spectacular.

An angry man (Mark Cohen) rudely wants to know the source for her story.

Of course, there isn’t one although she fends him off rather deftly.

As we say in journalism never let the facts get in the way of a good story.

It seems that Lettice is combating the tedium of an otherwise dull manse and is committed to the utter entertainment of those unfortunate to pay the price for a tour.

No harm in that eh mate! Why not have a laugh or two?

But, good grief, this is Great Britain where history even for a dull old house is absolutely sacred. In that regard Lettice is either inventive and witty or assaulting the integrity and honor of Queen and country.

Of course it all comes to a bad end when she is sacked by the rather prim and prudish Miss Charlotte Schoen (Marya Lowry) who is the HR director for the historical trust that employs Lettice.

As a woman of a certain age Lettice has dim prospects of finding suitable employment.

During the second act with a tinge of conscience Schoen insists of being admitted to the dank, prop filled, basement apartment of Lettice. It seems she got her flair for the dramatic from her mother an actress.

Gradually their differences are reconciled through copious libations of Lovage a medieval brew with a kick that Lettice has concocted.

We won’t spoil the fun and call it a day for the plot exposition of a wordy, witty and enjoyable play.

Mostly we reveled in the rare opportunity to view the live performance of Crouse, a great lady of theatre, and heir to a noble house. She is named for her father’s playwrighting partnership Lindsay and Crouse. Get it?  Her daughter is extending a career in theatre into a third generation.

Driving to the end of Route 128, in a modest space near the harbor, surrounded by lobster boats and the sound of squawking gulls, one is hardly prepared for ambitious theatre and stunning performances.

Weighed against a formidable résumé of theatre, film and television roles Crouse revels in the agony of an inadequate regimen of just two weeks of rehearsal, and a short run. In a ten year association with the company she delights, as she told me, in the pleasure of perfecting her craft. The association allows for enacting gratifying and challenging roles.

Moving about the stage, and scrambling up and down those steps, her years in dance are vividly evident. In addition to projecting her voice in a classical manner she performs with her entire body. Every movement and gesture enriches the constantly changing subtle inflections of character and mood swings.

For the audience it takes time to confront and absorb her persona and self destructive behavior. Is she a perfomance artist or simply a ditsy British eccentric? Are her emebelishments sublime and inventive or signifiers of personality flaws? Is she to be admired or cured of bad habits? This is the task for Schoen to sort through.

On stage there was no indication that Crouse is recovering from knee surgery last year. We call that playing through pain.

Lettice is a meaty role particularly with the reversal of the second act where adversaries grope toward becoming friends and allies. Then there is the double switch of a plot bender.

This complex arc allows great terrain for Lettice and Schoen to navigate. Both as characters as well as actors they are well matched. The direction of Benny Sato Ambush has been deft at enforcing the natural chemistry of these formidable women. I came to adore them both in equal measure.

Which is to say nothing of the cat playing its minor but crucial role to absolute perfection.

That said may I applaud the feline quality of Crouse and the courage of Ambush to let the women off the leash and free to just go at it claws and all.

As to the end result all we can say is meow and then some.