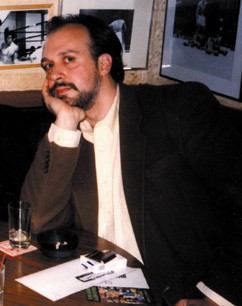 Pittsfield native Kent Jones returns to his home town to participate in BIFF.

On Saturday, June 4, Pittsfield native Kent Jones, one of the world’s most notable film critics and historians, will appear at the Beacon Cinema to screen and discuss his latest film collaboration with Martin Scorsese, A Letter to Elia, in a Berkshire International Film Festival special event sponsored by the Berkshire Film and Media Commission.

A past editor of Film Comment and a former programmer of Manhattan’s Lincoln Center Film Society and the Walter Reade Theater, Kent Jones is Executive Director of the World Cinema Foundation. Jones has authored several books, including Physical Evidence, a collection of his film criticism, and has worked closely with Scorsese not only as a co-writer and co-director, but also as a film archivist.

Jones and Scorsese’s latest collaboration, A Letter to Elia, was honored with a prestigious Peabody Award for 2010. The hour-long documentary explores Scorsese’s relationship to the work of the controversial director Elia Kazan, who made such seminal films as On the Waterfront, East of Eden, A Streetcar Named Desire, Gentleman's Agreement, and A Tree Grows in Brooklyn, and who became notorious for naming names during the McCarthy era’s House Committee on Un-American Activities hearings. Jones will screen A Letter to Elia on June 4 at 1:30 pm at the Beacon Cinema, after which he will take questions from the audience about the film. Following the Q&A, Jones will screen Kazan’s 1960 film, Wild River.

In a 2003 interview in Senses of Cinema, Jones cites his upbringing in the cultural Mecca of the Berkshires as significant to his future in film. Jones recalls his mother taking him to Scorsese’s film Mean Streets when he was just 13 years old, and notes seeing the great foreign films of the 1970s by such directors as Truffaut, Fellini, Bergman, and Antonioni in the cinemas of Pittsfield as formative to his future. He got his start as a critic while he was still a teenager, reviewing Berkshire summer theater productions, before entering into film criticism in the 1990s.

West Stockbridge filmmaker John Whalan, a member of the Berkshire Film and MediaCommission advisory board, had worked with Jones at a school for autistic children in the Berkshires when both men were in their early twenties.

Whalan reconnected with Jones in early 2011 at a screening of A Letter to Elia and struck upon the idea of including Jones and his new film in the Berkshire International Film Festival. Kelley Vickery, the festival’s founder and executive director, agreed and invited Jones to be part of the 2011 program, and the Berkshire Film and Media Commission stepped in to sponsor the event.

“It is an honor to be able to present the work of someone born in the Berkshires who has risen to the pinnacle of his chosen field within the film industry,” said Berkshire Film and Media Commission executive director Diane Pearlman. “The Berkshires is an inspirational place that can encourage children to be creative thinkers and pursue careers in the arts, including film. Kent is a wonderful example of this. We are thrilled to recognize his latest documentary and his achievements in the film industry. He is one of several prominent film professionals with roots in this area whose work is included in the Berkshire International Film Festival, in addition to that of many others who have chosen to live and work in the Berkshires.”

“We are thrilled to have Kent Jones returning to the Berkshires with his fascinating documentary on the infamous filmmaker Elia Kazan,” said festival founder Kelley Vickery. “Kent is not only an internationally recognized critic and filmmaker whose writings and books have been published throughout the world, but he is also executive director of The World Cinema Foundation. It is exciting to have someone of his stature in the film world at the BIFF.”