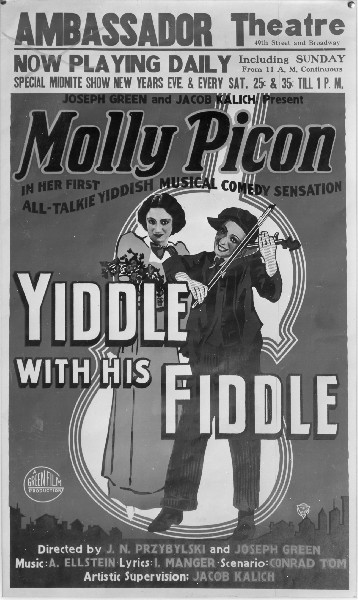 The original Yiddle with His Fiddle. 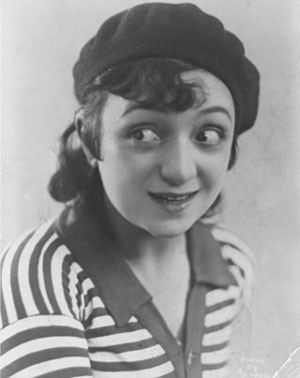 Molly Picon in the original role.

The Berkshire International Film Festival and The National Center for Jewish Film announce a special stage reading of a new musical production Jidl Mitn Fidl (Yiddle With His Fiddle) on Sunday, June 6 at 4:00 pm at the Mahaiwe Performing Arts Center in Great Barrington, Massachusetts. Tickets are $10, visit www.biffma.com .

Based on the classic 1936 Yiddish film musical comedy Yidl Mitn Fidl starring the irrepressible Molly Picon, this new English-language adaptation was written by screenwriter and author Stephen Glantz and will be directed by Susan Merson.

The reading will be the first public presentation of this show. Following the reading, there will be a question and answer session with the Yidl Mitn Fidl writer, director and cast.

Jidl Mitn Fidl is a comedy with music about a pair of traveling musicians: a poor, widowed father and his daughter Yidl who disguises herself as a boy to more safely hit the road. The two team up with another “father-son” duo for music, laughs and romance. Yidl falls for Fraim, the other young violinist, but soon finds herself “competing” with him for the same girl! Mistaken identities abound, as do bride, grooms and gangsters all to a Klezmer beat. In the end, all the characters find their Bashert—their true love or destiny. As the Yiddish saying goes, “If a man is destined to drown, he’ll drown in a spoonful of water!”

Playwright Stephen Glantz’s new production features the classic songs, Yiddle with his Fiddle, Play Fiddle Play, Oy Mama and Drink Fellows Drink, along with new songs written for this production and arrangements by the Balkanized Melodrome and David Cieri who most recently has scored several Ken Burns documentaries.

The production’s cast includes: Estelle Bajou in the title role and singer-songwriter Bobby Sweet as Fraim.  The event will feature special appearances by Annette Miller, star of Shakespeare and Company’s productions of Golda’s Balcony and Martha Mitchell Calling and who can be seen as the Duchess of York in this season’s production of Richard III as well as Jonny Esptein as Schlomo the Wedding Singer.  Jon will be appearing as Leontes in Shakespeare and Company’s production A Winter’s Tale.

Writer Glantz’s most recent film, The Last Train, screened at 2008 Berkshire International Film Festival and won the Director’s Prize at the Bavarian Film Festival. It was praised in Berlin Zeitung, Der Spiegl and Die Bild, as “…a very special film”, “truly moving,” and “The most important film of the fall.”  His book Clara’s War (Harper Collins) was translated into 17 languages and was named a Sophie Brody Honor Book by the American Library Association for the most significant Jewish-themed books of the year.

Director Susan Merson is also an actress and writer who was the director of the Streisand Festival for New Plays; an Associate Producer at the Mark Taper Forum in LA and is currently on the board of The Ensemble Studio theater in New York.

The film Yidl Mitn Fidl, directed by Joseph Green and shot in pre-war Poland, was the most popular of all the Yiddish films produced in the 1930s and 1940s. Green's original screenplay was enhanced by the folksy lyrics of Yiddish poet Itzik Manger and a memorable musical score by Abraham Ellstein.

The original 1936 film was restored by The National Center for Jewish Film. NCJF is a unique nonprofit film archive, distributor, resource center and exhibitor, housing the largest collection of Jewish-theme film in the world, outside of Israel. Since 1976, NCJF has restored 38 Yiddish feature films, as well as dozens of other "orphan" films that document the diversity and vibrancy of Jewish life. NCJF is a major distributor of Jewish films, with over 300 classic and new films available to the public.