Missy Mazzoli and the Gotham Opera 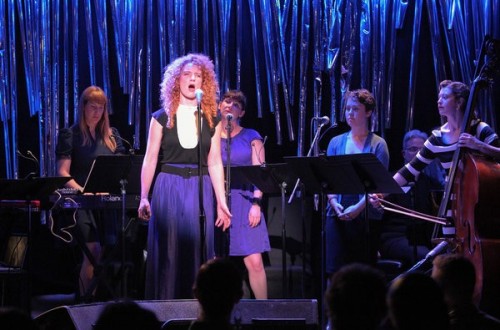 Abigail Fischer, an unusual range and a thrilling texture. 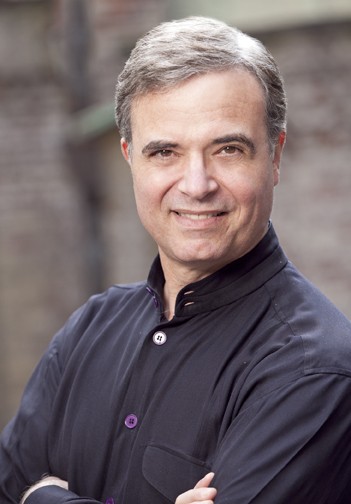 Neal Goren of Gotham Chamber Opera. Imposing and yet warm. 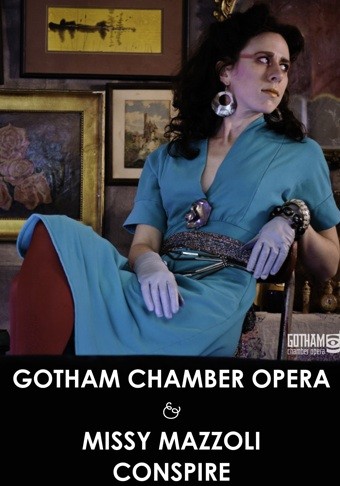 And she wears gloves!

Neal Goren is the moving force behind Gotham Chamber Opera, eleven years old and mature beyond its years.  Over and over again, in a variety of venues, Gotham brings us opera, intimate and at its best.

Committed to bringing seldom performed opera to light, Goren also presents the cutting edge composers of our day.  He mounted Nico Muhly’s operas early on, and now is a force behind Missy Mazzoli, whose personal force, broad talent and sheer delight he helped support in a three year composer in residence backed also by Opera Philadelphia and Music-Theater group.

Together they ‘conspired’ in an evening at 158 Bleeker Street in New York's  Le Poisson Rouge.  Goren may have been in the background, accompanying Mazzoli’s eclectic selection of classic and contemporary aria, but his dynamic presence on any occasion is welcome.

Striking are the few props and lighting of a small space well used at Le Poisson.  For this evening, shower curtains are lit blue, but change to red at particularly passionate moments.  From one angle, the singer’s hair turned an unusual, but curiously appropriate purple.

The evening was divided between Mazzoli’s compositions, some played by her band Victoire, sometimes with a singer, and others from her first opera, Songs from the Uproar, a very personal and yet grand piece which has been making the rounds in various forms.  The Kitchen put on a much lauded production earlier this year.

At Vox in their 2010 program, selections of Songs from the Uproar were sung magically by Nina Yoshida Nelsen, but the role was created for the extraordinary mezzo Abigail Fischer who sang “You Are Dust,” “Mektouh, Parts 1 and 2,” and “Here Where Footprints Erase the Graves,” from the opera.

Mazzoli has said, “When I discovered Isabelle Eberhardt’s story, I quickly realized…that her life required something elaborate, a medium that allowed the audience to be completely immersed in her tale.’  The grandeur and complexity of opera had originally turned her off.  Now they attract,  because she sees music as engaging all the senses.  Certainly Fischer as a performer, with an implacable face and all the emotions poured into this incredibly wide-ranging and lush voice, is spine chilling and mind thrilling.

Mazzoli’s band performed “Like a Miracle” voiceless, but also lyrical.  Bracketed by strings, a violin at one end and a double bass at the other, top and bottom to the music are bowed.  The violin often reaches seemingly beyond its reach, and the bass provides a floor with its incessant beat.  They are also more familiar sounds than those that emerge from electronic keyboards, which present the complexity and emotion of Mazzoli’s musical vision. When Mazzoli plays, she also conducts, hums and sometimes even sings.

The evening also included Mazzoli’s selection of opera aria’s past that move and intrigue her.

Fischer performed Mahler’s ineffably moving song, “I am lost to the world.” from the Ruckert cycle. Fischer’s take on “I live alone in heaven, in my love and in my song” brought tears to the audiences’ eyes.

The bass Aaron Sorensen followed with Purcell’s King Arthur aria, “What power art thou,” which Nikolaus Harnoncourt conducts with the singer chattering in cold.  Sorensen elected to keep in a lyrical line of phrases like “Let me freeze again to death”, hooking the notes to give the interrupted feel of cold, but keeping the musical line intact.  Goose bumps erupted.  Majestic, dark and emotional, the driven beat is like Mazzoli’s and perhaps a reason she is drawn to this aria.

The arias by John Adams, Benjamin Britten as well as the Purcell felt at once fragile and driven, like Mazzoli’s music.  Adams’ Pat Nixon, sung by soprano Angela Fout, has a very feminine tone.  Kitty Oppenheimer also is musically feminine in Dr. Atomic.

Commenting to Mazzoli that her music sounded female, she was taken aback for a moment, but continuing with “different,” and “distinctive,” she seemed please.  She does not sound at all like the other women composing today, combining the insights of her teachers, Louis Andriessen,  David Lang, Martin Bresnick and John Harbison among others.  Often she displayed aggressive lyricism, explosive releases, austere energy.   But always you here bells and chimes, which soothe the ear and captivate by seduction.  Mazzoli’s is music of unnerving power and a restless spirit of invention.

Le Poisson Rouge is the perfect venue for innovation and intimate reminders of glories past.

Next up for Gotham,  La Hija de Rappaccini in the Brooklyn Botanical Gardens.