The Realistic Joneses by Will Eno 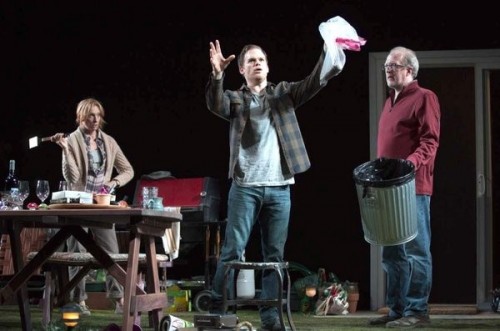 Doomed men and their coping spouses gather in a suburban back yard. 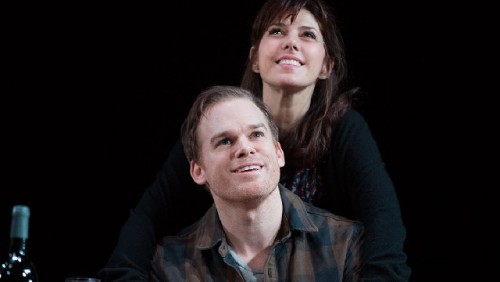 A marquee cast sells tickets to a perplexing play.

No there isn’t a dead tree in a lunar wasteland landscape.

The non sequitur, one act, ninety minute play by the provocative Will Eno The Realistic Jones starts all too plausibly when the newly arrived John and Pony Jones (Michael C. Hall and Marisa Tomei) pop in on the bucolic, suburban back yard of their immediate neighbors, another set of Jones in this case Bob (Tracy Letts) and Jennifer (Toni Collette).

The newbies are full of let’s be friends energy bringing a gift bottle of tinsel wrapped foreign wine. Never opened by the way and during one of many short later scenes John wants it back.

The realism implied in the title quickly devolves to surrealism as the collaged sequencing of the drama offers more Beckett like metaphors and vignettes than the linear and comprehensible plot lines that one expects on Broadway. Not surprisingly the play was developed at Yale and lurched to Broadway after its premiere based on the stellar reputation of the playwright and recasting with marquee names.

It is indeed an amazing cast given lots of room to expand on complex personas and mind numbing dialogue. The play seems to make more sense to the actors than the often perplexed audience kept disarmingly laughing by the mostly curmudgeonly zingers of the soon nasty and sparring men. The superbly acted women are at their best coping with out of control impossible conundrums.

We first learn that Bob then later John are suffering from the same degenerative, incurable nerve disease. They may have come to this hamlet because of a local physician who is working on an experimental treatment. The syndrome causes a welter of confusion which the men respond to differently manifested by unpredictable tourettes-like comments and actions. There is no logical way to explain what they are doing and we the audience are hard pressed to understand what’s going on.

For a rocky evening we are tossed about like a suburban backyard game of touch football. There are moves and actions but nobody seems to be keeping score.

Perhaps that’s a metaphor for suburban American life where most folks just live, barbecue, and entertain each other while waiting for their demise.

In this case with the overhang that the men know that they are dying but can do nothing about it. Jennifer is fed up playing nurse to an increasingly nasty man and Pony, what a fitting name, just trots about with a frozen happy face.

In an existential trope yet again there is no exit and hell is the other Jonses.

Indeed haven’t we seen and heard this all before?

By the end of this play it, well, just felt over.

It was interesting that the actors did not receive the obligatory standing ovation.

While leading critics have praised the brilliance and originality of this play, despite the release of dark humor, most of the audience just remained in the dark.