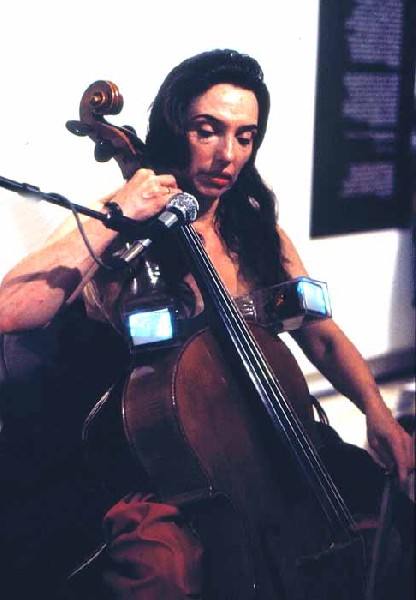 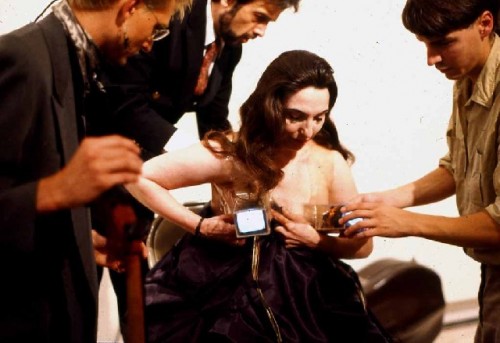 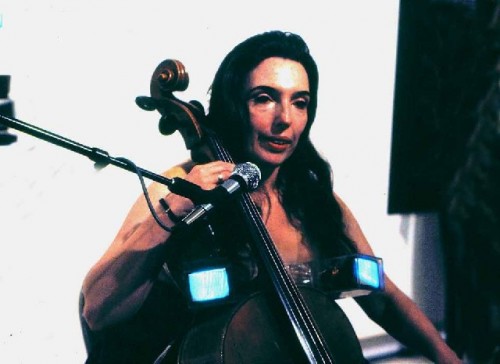 A detail of Moorman performing. 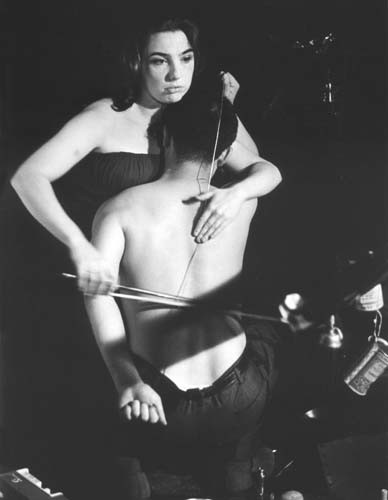 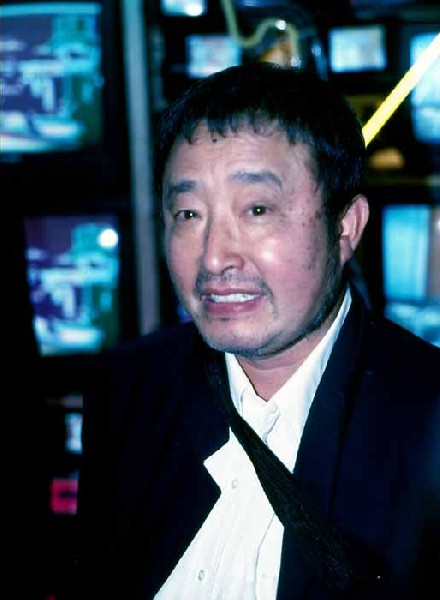 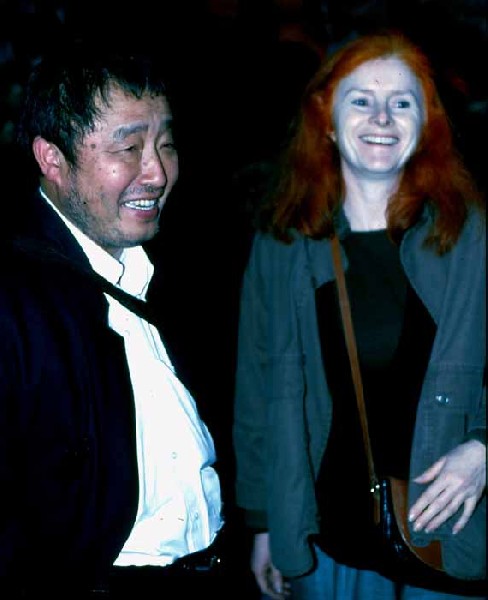 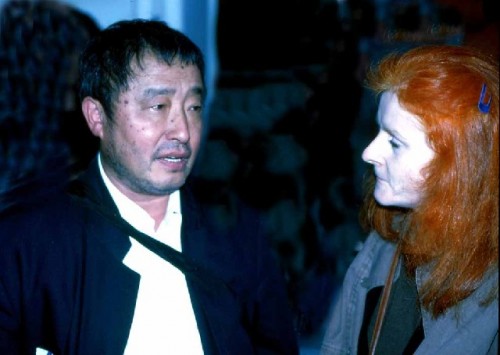 Recalling days when Paik was a Research Fellow at MIT’s Center for Advanced Visual Studies. 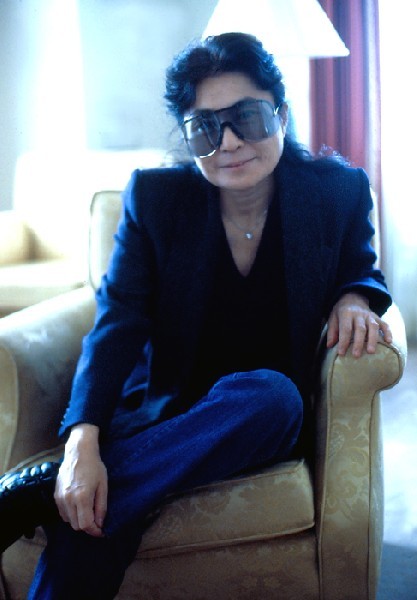 Yoko Ono was formerly a roommate with Charlotte Moorman. 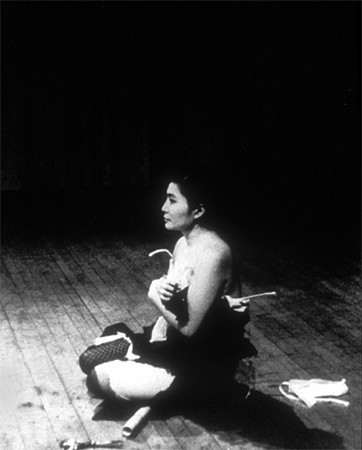 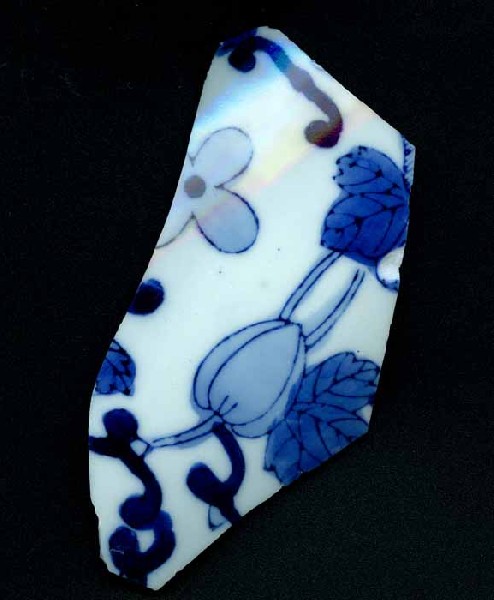 Astrid’s shard from the "Promise Piece" which was performed by Yoko Ono on February 15, 1992 during the memorial celebration for Charlotte Moorman.

The exhibition: "Imagine-The Peace Ballad of John and Yoko" is free at the Montreal Museum of Fine Arts, through June 21, 2009.

While being absorbed in an extensive and imaginatively installed exhibition, which contains hundreds of John and Yoko's photos and images, music and sounds, words and activities during the two hours we spent at the exhibition: Imagine Â– The Peace Ballad of John and Yoko- in Montreal, my mind wandered off. I have not encountered John personally, but  met Yoko and knew Charlotte Moorman and Nam June Paik for many years. Some wonderful tales came to mind:

Yoko and Charlotte were roommates in New York City in the '60s, young artists of the avant-garde art scene.   Charlotte had finished a post graduate year at Juilliard School in 1962. She was trained as a classical cellist, beginning at age ten. Since arriving in New York, she had been drawn to contemporary music and selected a John Cage work as her final concert, while at Juilliard. She performed in front of the faculty, her fellow students and other guests were not invited. It was an otherwise empty concert hall. Those were the days !

According to Charlotte, Yoko told her one day that she had met this young British musician, John Lennon, "who seemed to have a future," as she put it during a seminar meeting at MIT's Center for Advanced Visual Studies (CAVS). The seminar was held in the '80s. Charlotte herself was newly involved with a young New York artist and night-watchman at a hotel, Frank Pileggi. Frank worked at night, so that he could make art during the day, and the job left plenty of time for reading. He became Charlotte 's husband, manager, and later care giver.

During that seminar, she spoke vividly about her arrest by NYPD Blue, in 1967, during a topless video/cello performance of Nam June Paik's "Opera Sextronique." Charlotte was traumatized: "Imagine me, I grew up in Little Rock, Arkansas, and there I was in New York in handcuffs and overnight in jail." She made world-wide headlines, but did not like the experience of the arrest at all. Moorman and Paik collaborated for years.

Another memorable work by Paik for Charlotte is the "TV Bra for Living Sculpture," which was premiered in 1969, but we recall seeing it at the Institute of Contemporary Art in Boston, MA, and MIT/CAVS, in Cambridge, MA, in the '80s. Charlotte would wear two small monitors, instead of a brassiere, where images of the audience would flash through. Other famous pieces are Paik's "Charlotte Moorman with TV Cello," as seen on the accompanying photo, or Cage's "Charlotte Moorman with Human Cello." Paik would hold a cello string behind his bare back and Moorman would play cello on the human body.

At "documenta 6" in Kassel, Germany, in 1977, Paik presented an installation piece "TV Jungle," where we actually first encountered his work. The viewer was assaulted by an endless stream of confrontational video and sound tapes, glaring and blaring from a big TV grid on the floor upwards. It was only a prelude to today's infinite options of visual communication and still a time before the internet.

At Documenta, as a representative of MIT/CAVS we helped to maintain "Centerbeam," a group work by 14 artists, collaborating scientists and engineers. It was an artistic and technological wonder, which became a performance piece at night. During the day children and adults played with or experienced the steel, glass, and technological sculpture, which was 144' feet long: Installed were solar tracked holograms, videos, a brine/ice line, a glass and water trough, a neon-argon line, a poetry and grow line to offset and humanize the hard technology, and much more. At night "Centerbeam" performed sky events, namely laser light works on steam, and on occasion an inflatable sculpture was lifted way above the work.

Charlotte also performed Yoko's conceptual work. Most memorable was a performance at the Center (CAVS), where she struggled for minutes to make her way out of a large, black, felt sack. She was living and working with heavy pain killers, while fighting cancer. The performance clearly signified her struggles in life and in general of all human kind. She lived for her work and still lived, because of her work, and because of Frank's constant support. They had arrived at the Center for the evening, and Charlotte was weak and sick.  When she walked down the stairs a couple of hours later into 'The Pit' the formal/informal performance and installation space at CAVS, she was transformed and delivered a beautiful work of art.

One evening, while I was working late at CAVS, several months after that memorable day, Charlotte called. She asked to have a set of exhibition size photos returned to her and wanted to make sure that they still existed. I assured her, that they were at CAVS and that we would mail them promptly to New York. Then she began to complain about the difficulties in her life and her pain. Frank gave her constant support, but pain Â– real and severe pain is our own to bear. After a few minutes, I suggested that at some point, one has to accept the inevitable and let go of life on earth. "Oh, no," she emphatically replied: "I know what life I have here. I do not know what is waiting for me on the other side."

I recalled this incident on video at Charlotte's memorial celebration at the Whitney Museum of American Art, a few months after Charlotte had died. It was February of 1992. Paik had asked a crew to interview fellow artists and friends, to speak about a memorable moment with Charlotte.


That evening ended with a Franz Schubert work, a recording by the Cleveland Quartet with Yo-Yo Ma Â– of course, a cello piece. Paik and others presented "Valentine for Charlotte Moorman." Valentine's Day was Charlotte's favorite holiday, and she used to draw small and large hearts on notes and letters she sent.

But Yoko Ono's "Promise Piece" is what I still remember well. She presented a large Japanese vase to the group. She said that she would break this expensive vase, that she holds dear, into many pieces Â– and that she did. Then she continued to say that she would invite everyone to return in ten years and we would put the vase back together again. Many came forward to select a shard of the precious pieces.  Someone in our group picked the bottom shard with the $ 79 price tag on it. I still have my piece of the Japanese vase. Yoko, the "Promise Piece" was a beautiful gesture and performance. Just call, write, or e-mail: We will return to any place, at any time of the year, and we will attempt to make the vase - and our world - whole again.