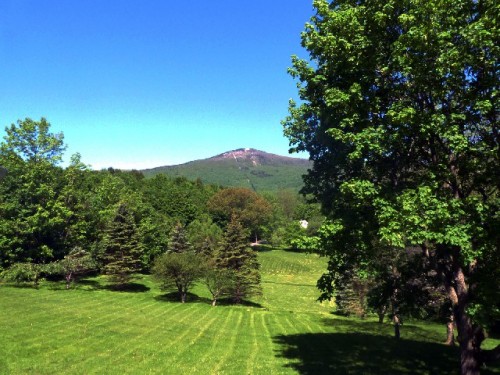 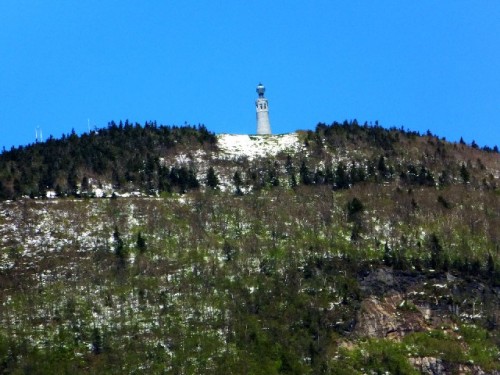 Across the broad lawn, we have a view of Mt. Greylock the highest peak in Massachusetts.

On Sunday morning it was cold and wet.

The night before the wind howled and rattled the house.

Looking up there was disbelief!

Snow on top of Mt. Greylock on Memorial Day Weekend?

This morning, finally a decent sunny day, I took a snap before it melted.

A solid argument against the nay sayers of global warming, pollution, and climactic change.

On Saturday night a friend told Astrid that snow  was expected in South County.

There was urgency as I was dispatched to find a weather report.

Prediction was that overnight the temperature would drop to 38 degrees.

Nippy but no frost.

Couple of weeks ago it was balmy inducing me to cheat on the Farmer’s Almanac and put out house plants for a head start.

Some that she had nursed through the winter are now toast.

But this weekend was different.

Or is supposed to be.

Visited the greenhouse on Friday to beat the rush over the weekend.

Some plants and perennials were sold out but I got my heirloom tomatoes.

We’ve been renewing the raised beds.

They survived the threat of frost.

Except for a theatre matinee on Sunday we mostly hunkered down and turned up the heat.

That’s not supposed to happen.

Mostly we were both kindah cranky.

Getting on each other’s nerves.

On Memorial Day you’re supposed to crank up the barbecue and have the neighbors for beer and burgers.

A local said “I ain’t seen the like of it in all my born years.”

Expect more of this.

Sunbathing in summer at the North Pole and blizzards on the Cape.

Kind of felt bad for the tourists.

Spending all that money to stay at Porches in North Adams or Red Lion Inn in Stockbridge.

Restaurants were packed as picnics got cancelled.

Probably a good take at the movies.

Waiting on line for the Men’s room I chatted with a visitor for Jersey.

They were hoping for a strong launch of the season after all the hurricane losses.

Supposed to be in the 90s by the end of the week.

But not taking any chances.

Planning on putting sandbags round the house by Labor Day.

Hope the dam don’t bust next to our loft.

Like those vintage pictures of a flooded North Adams.

We’ll have to see whether the corn is knee high by the Fourth of July.

A good rain now and then is ok but this is  plum ridiculous.