Arms and the Man at Old Globe 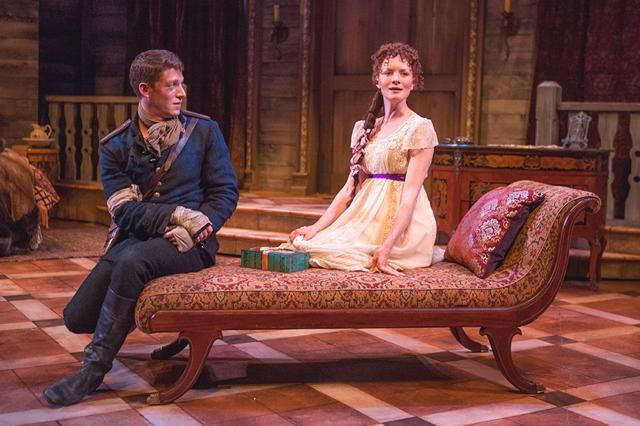 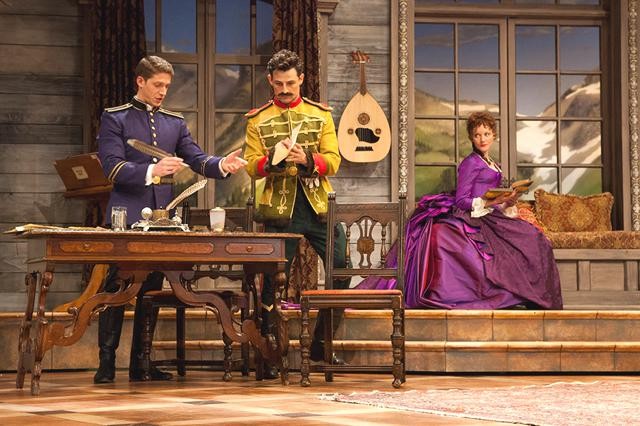 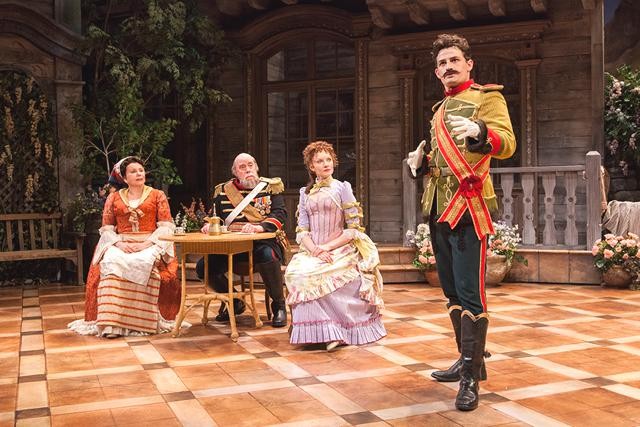 George Bernard Shaw was a word provocateur extraordinaire when it came to illuminating the hypocrisy of war and its practitioners. Rather than rail as in a polemic, he chose comedy to expose the pomp and folly of war by those who glorify it as well as profit from it.

War + Love = Comedy. The elements of war, love, and comedy when spoken under normal conditions during public discourse become an oxymoron. However, under the withering, biting wit and pen of Shaw, the three subjects merely become one more weapon in the irascible Irish playwright’s arsenal; illuminating the glorification and folly of war and its practitioners. He also throws in for good luck his disdain for members of the female sex for their idealistic views on war and love, thus enabling their testosterone-fueled male partners and society.

The story is set during the brief Serbian – Bulgarian war of 1885. Raina Petkoff (Wrenn Schmidt) is engaged to the preening peacock, Bulgarian Major Sergius Saranoff (Enver Gjokaj). Serbian mercenary Captain Bluntschli (Zach Appleman) bursts into Raina’s bedroom one night while trying to escape during a battle, and threatens to shoot her if she cries out. Once over her initial fear of the young, handsome, enemy officer, the two agree to some form a truce and the game of attraction between strangers begins. Raina’s mother Catherine (played by Marsha Mason) and her servants Louka (Sofiya Akilova), and Nicola (Greg Hildreth) become confidantes in keeping Major Saranoff and Raina’s father Major Paul Petkoff (Conrad John Schuck) in the dark about Captain Bluntschili’s involvement with Raina.

From there the story – remember it’s a farce – goes over the top. This includes: duels, romantic scenes between lovers like Raina and Bluntschili, and Louka and her paramour Saranoff, with additional offers of romance from Nicola, as well as musical interludes throughout by the local village fiddler (Ernest Sauceda). The only thing missing is an entrance by the Marx Brothers.

“Arms and the Man”, crisply directed by Jessica Stone is blessed with cast of talented and seasoned performers who when they find themselves on a stage in a sharply and insightfully written farce/satire, know exactly how to handle their characters and the situations. Also it’s a real treat to see exciting displays of individual brilliance within a team format, like the high octane turn of Enver Gjokaj’s Major Sergius Saranoff’s comedy performance. I’m quite sure, however, that the steady hand of director Stone was ever present.

The Old Globe has few equals when it comes to first-rate technical credits, and this production is no exception. The Set Design by scenic design wizard Ralph Funnicello is a delight for the eyes; as is the mood lighting designed by Austin R. Smith. David Israel Reynoso’s costumes are colorful and evocative of the period. The gorgeous dressing gown worn by Ms. Schmidt I hope has a large insurance policy to deter people from pinching it. It’s so large she can literally disappear into it.

Under the solid direction of Jessica Stone, and a splendid ensemble cast of farceurs who excel in exquisite timing and precise movements, “Arms and the Man” becomes a highly entertaining comedy romp of the old school that blows gently across the Shiley Stage like a breath of fresh air.
Artistic Director Barry Edelstein is definitely on a roll giving San Diego theatre patrons another winning season. Laissez le bon temps rouler!

“Arms and the Man” performs at the Old Globe’s Donald and Darlene Shiley Stage through June 24, 2015.