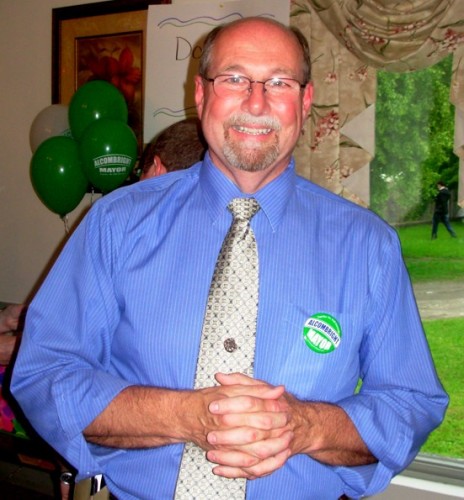 While Candidate Dick Alcombright may not have made the sauce for the spaghetti supper benefit he appears ready to stir the pot. 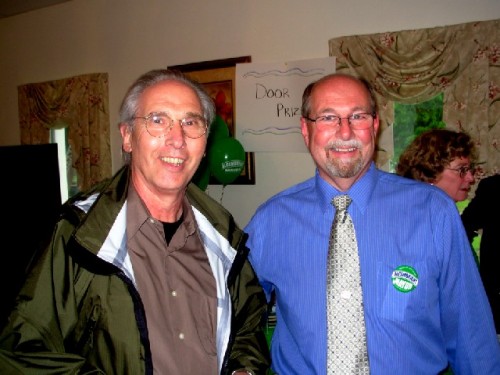 Candidate Alcombgright is eager to meet with and listen to artists and musicians like Carl Oman a resident of the Eclipse Mill. 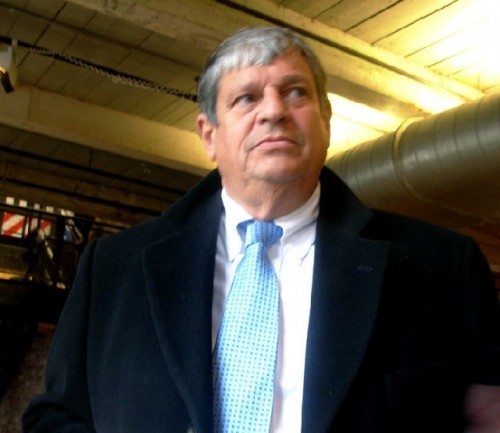 Is this the Last Hurrah for Mayor John Barrett,Jr. who has been in office for 26 years? 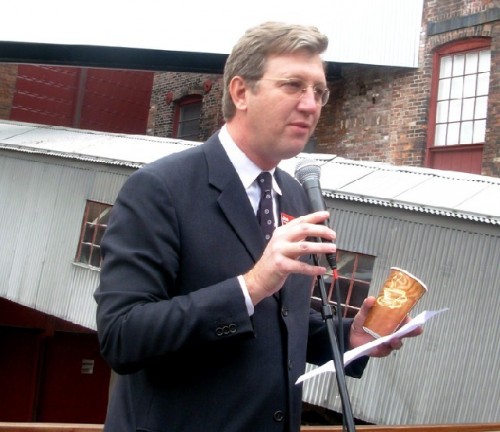 Now in its 10th year Joe Thompson and Mass MoCA have been a large part of the recovery of North Adams. 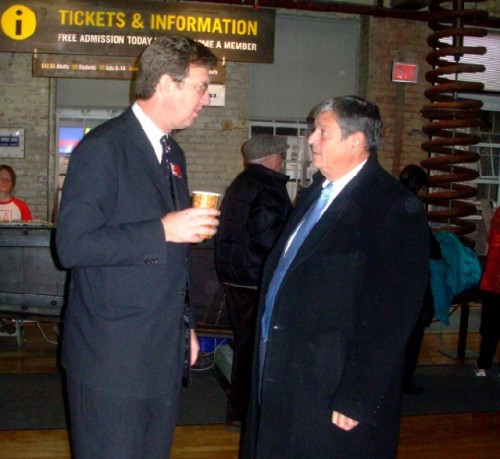 While Thompson and Mayor Barrett have worked well together can they do more for the economic development of North Adams? 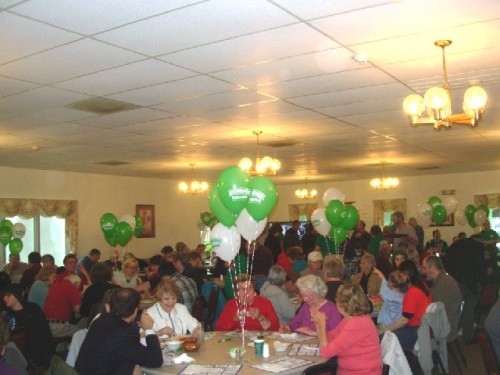 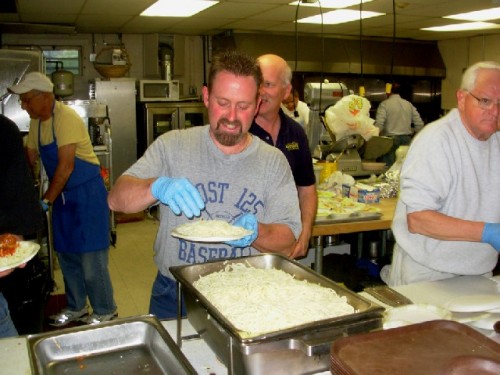 Dishing out the pasta. 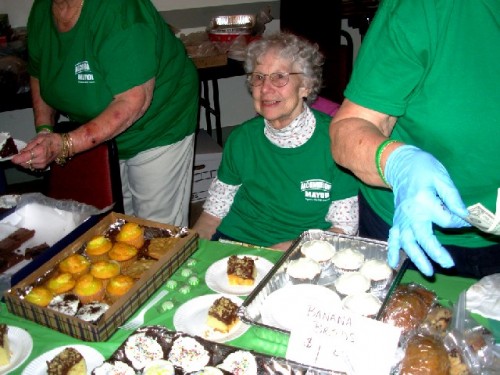 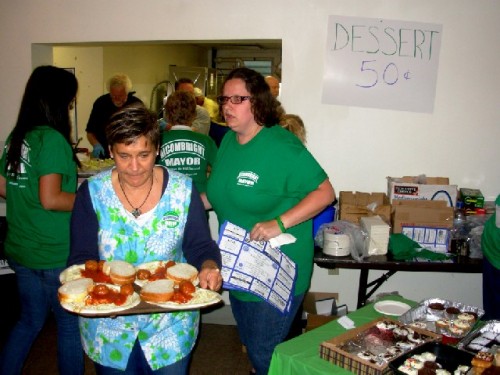 Getting the food out. 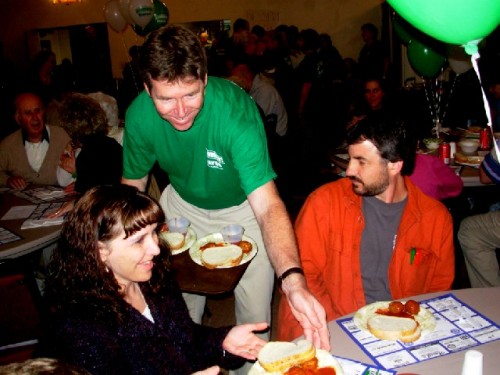 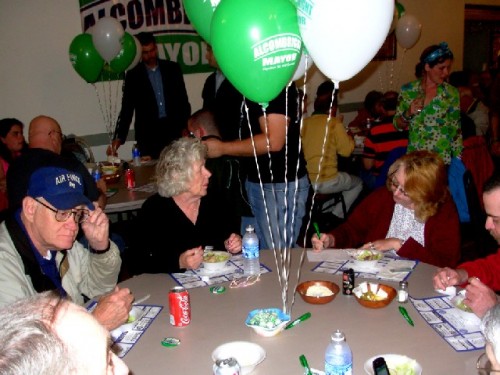 Chowing down and talking politics. 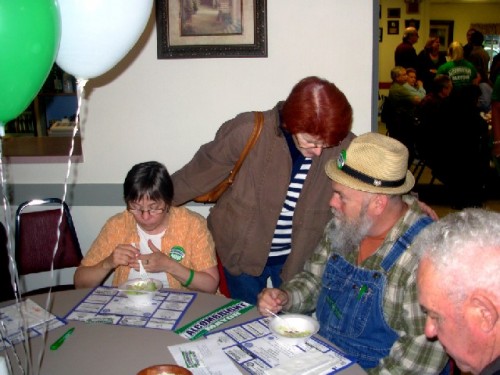 A table of artists networking. 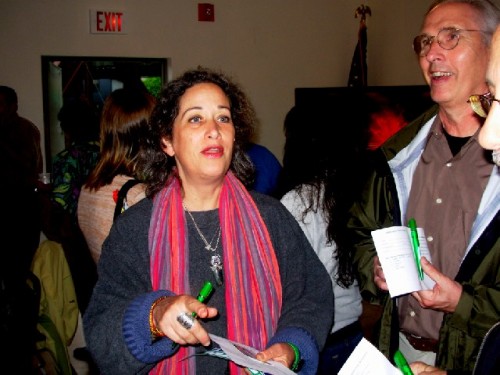 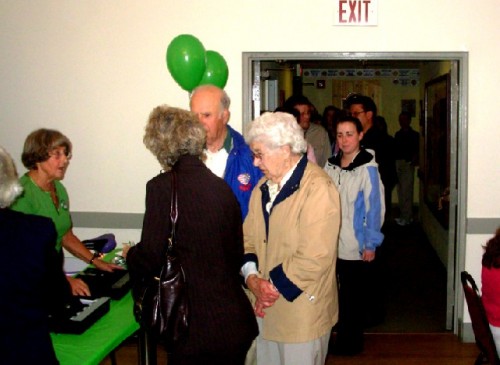 The line went out the door and around the building. 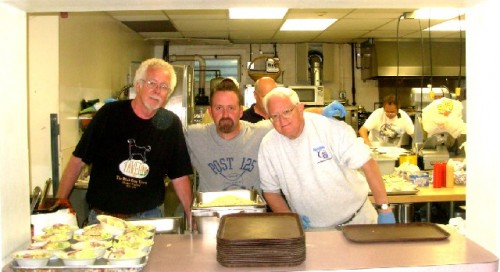 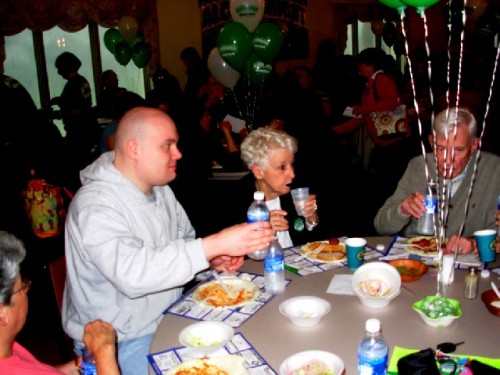 The was a family event that brought the community together. 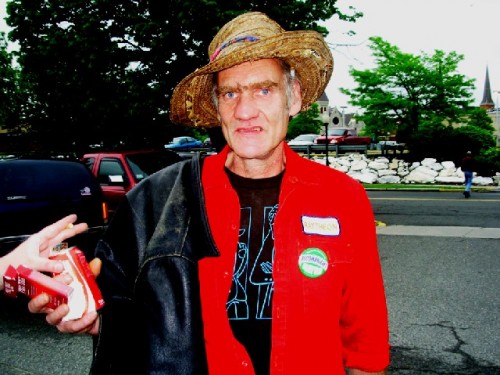 In Facebook postings promoting a $6 spaghetti dinner at the American Legion Hall in North Adams, the candidate for Mayor, Richard Alcombright, stated that he had to rush home to make the sauce. I was skeptical, after all, Alcombright is not an Italian name, not sure just what it is.

But the thought intrigued me. Imagine, a  Candidate for Mayor who cooks! Can make a spicy sauce and is willing to stir the pot. A lot of folks feel that it is time for a change. Give a lot of credit to Mayor John Barrett who started when the city was in the dumpster after Sprague Electric folded and took the jobs with them. This was when Mass MoCA was just a pipe dream of Tom Krens, then the director of Williams College Museum of Art, who pitched his notion of turning those 17 acres of dead real estate into a vibrant contemporary art museum.

Barrett, then and now, likes to state that he wouldn't cross the street to enter a contemporary art museum. He has said over and over, some people never learn, that his taste runs to Norman Rockwell and the museum devoted to his commercial illustrations for the Saturday Evening Post over in Stockbridge.

But Barrett signed on with the development of Mass MoCA and likes to take a share of credit for its success. The museum is celebrating its 10th year but has yet to realize its full potential for influencing the growth and development of North Adams which has slowly moved off the bottom as one of the poorest communities in the Commonwealth.

This summer, for the second year in a row, empty storefronts in the hard scrabble down town are being refocused as art galleries in the DownStreet project. Last year it brought some 15,000 visitors but business remains stagnant.

Everyone agrees that Barrett has helped the city to move on from its darkest days. But he has been in office for the past 26 years, or 13 terms, now looking to make it 14 for another two years.

For the first time in decades Barrett is facing a viable opponent in Alcombright. Some time back the artist/ developer, Eric Rudd, ran for mayor but his campaign was largely seen as a conceptual art piece. Rudd continues to be a vital and vocal member of the community who went on to develop the Eclipse Mill artist studio/ loft complex. With its 40 units it created a strong presence and focus for an expanding arts community.

If you follow the comments in the North Adams Transcript, with close ties to Barrett, there has been a town and gown split between older citizens who dream of bringing back industry to North Adams, like the departed Sprague, and a younger, new constituency who feel that the future of North Adams is in further development of arts and cultural tourism. Many feel that Mass MoCA has not done enough toward the economic development which the visionary Thomas Krens, then the director of the Williams College Museum of Art, pitched to Governor Michael Dukakis, to secure some $30 million in Commonwealth taxpayer's money to develop Mass MoCA.

Yes, the first tens years for Mass MoCA have been tough. Joe Thompson, and Barrett, deserve enormous credit for keeping the museum afloat. And these are particularly challenging times with cuts of on average 20% for Berkshire cultural institutions. This summer Mass MoCA hopes to ride the momentum of the Sol LeWitt building which came on line last November, as well as, the pitch of the 10th anniversary and marketing for DownStreet.

Despite all of the challenges for survivial Mass MoCA closes the books on its first decade with an endowment of $14.7 million, modest by museum standards, but a start. The annual attendance is projected to be 145,000 up from an average of 115,000 to 125,000. Much of that increase results from the Sol LeWitt building. But coming into this summer that is old news which maxed out last fall in the national media. Everyone predicts this will be a very tough season for the arts in general and in particular for the Berkshires with its reliance om cultural tourism.

The conventional wisdom is that as goes Mass MoCA so goes North Adams. But this is only partly true. While the museum focuses on and does a good job of filling its parking lot, packed on any given day in season, there is no real strategy to get those 145, 000  visitors over to Main Street to shop and dine. On any given day, other than the Mass MoCA campus, North Adams is a ghost town. A couple wandering down Main Street gets merchants all excited. And, at night, there is nothing going on. Nada. Even the hangout Cup and Saucer closes mid afternoon.  It's tough for the local kids on the MCLA campus who split after graduation.

Several years ago Pittsfield faced similar issues when General Electric up and left taking 10,000 jobs with them. Maggie Mailer proposed taking all that vacant real estate on North Street and occupying it, rent free, as the Storefront Artists Project. It helped to revitalize the city and there is now a 90% occupancy rate for commercial real estate. This was assisted by a $10 million development fund from GE of  which a third has been earmarked for the arts. This included the renovation of the Berkshire Museum and the Colonial Theatre as well as the relocation of Barrington Stage Company and Ferrin Gallery. A state of the art indy movie theatre comes on line in December.

In a bit of compare and contrast one might ask just what is Pittsfield doing right that is not happening in North Adams? Surely these questions will emerge as campaign issues in what is promising to be a tight race. The development of the Mohawk Theatre is a piece of the puzzle as is the potential success of DownStreet. As well as putting  feet to the fire to get Mass MoCA to be more of a participant in community development. We need a real game plan to get all those visitors, more some 145,000 annually, from the parking lot to hard hit, down on its heels, Main Street.

During a few moments of face time with candidate Alcombright  I asked if he actually made the sauce as he stated on Facebook? Not really was the answer. File it under campaign promises and who can trust anything a politician says. Truth is they were running through a lot of sauce. So much so that in the middle of the event there was a quick run to Big Y.

When we arrived the line was out the door and around the block. There were reports of waits as long as an hour and a half to press the flesh with Alcombright. As we table hopped it appeared to be a real community event. Artists were out in force as well as lots of seniors and former Sprague employees. These folks have long memories back to when North Adams went belly up.

If you took a vote the other night, based on a turnout of some 800 plus and the wonderful energy, Alcombright would win in a landslide. There is speculation Barrett may not even announce that he is running. But Barrett has remained in office for 13 terms, the longest of any seated Mayor in the Commonwealth, by doing something right. To tune up for this tough fight perhaps His Honor should read Edwin O'Connor's 1956 novel "The Last Hurrah" about Frank Skeffington thinly disguised as James Michael Curley. If this race is anything like that one it's gonnah be a heck of a brawl.