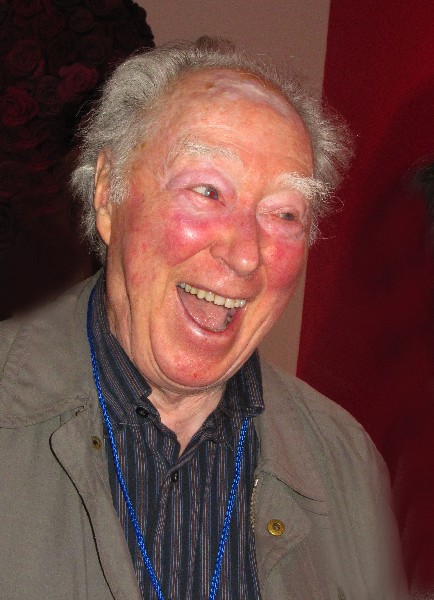 Michael Snow enjoyed being at MoCA but focused on his own work. Giuliano photographs. 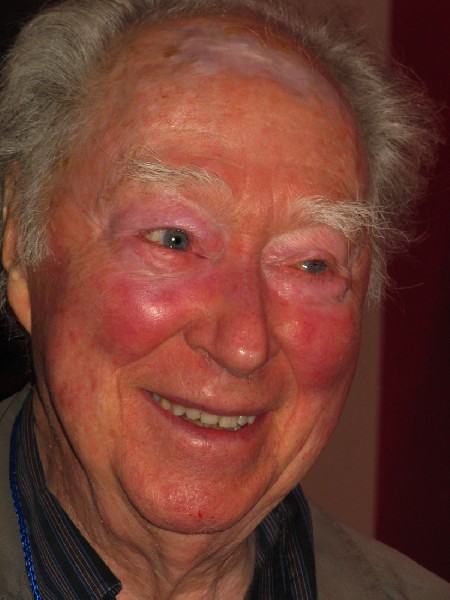 Now in his 80’s Snow continues to show internationally. 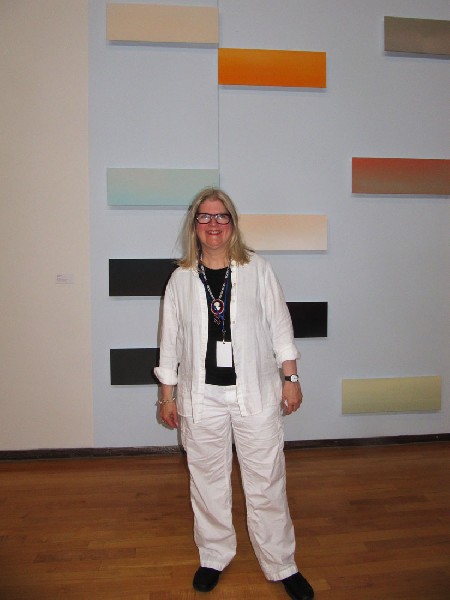 Wanda Koop in front of her piece which rises above. 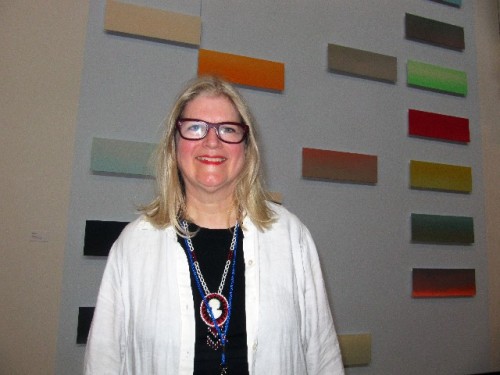 Wanda Koop is known internationally but less so in the U.S. 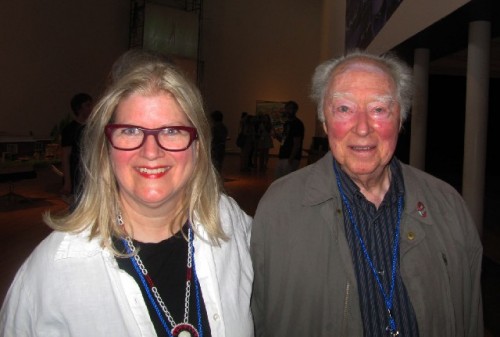 Sharing a dialogue with Snow and Koop. 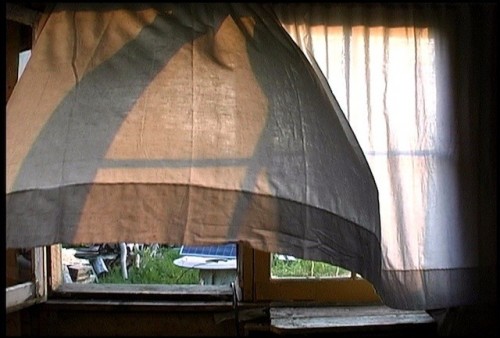 Solar Breath a video by Michael Snow at Mass MoCA.

Charles Giuliano What’s going on in this piece? Is it more than a grid of abstract paintings?

Wanda Koop It’s an anomaly in terms of my work if you are at all familiar with it. I’m known for my large scale paintings and installations with video projections. This is a piece I did three years ago for an exhibition in Montreal. It was initially in a chapel. It is a space that is very long, narrow and high. And eneveloping.

I’ve been a color researcher for my whole life. I use color as the vehicle to express observation and experience. For this piece I wanted to strip it down to the bare minimum and do these somewhat monochromatic pieces. It comes out of my experience of living in a very big open space. In Winnipeg, the geographic center of North America.

CG That was said with a certain pique. Do you have an attitude about us?

WK Not as individuals. (both laugh) That’s sincere.

CG Are you pleased to be here?

WK Very. I’m very excited to be here. The spirit of the museum is spectacular. I’m always interested in exhibiting in alternate spaces. I did a large exhibition in Venice in the Arsenale. This building as an industrial space is similar.

CG So you have shown widely internationally.

CG Pity they closed that.

WK Yeah because there was momentum building. It would have continued to bring Canadians to America and not just the few who we hear about.

CG There was a period time when as a journalist I was invited to Canada, particularly Montreal, quite often. There was a chance to know the artists, curators, museums and galleries. It was an opportunity to network and be involved with projects. Then the funding just shut down about the time that 49th Parallel closed in New York.

WK That has continued. As a senior Canadian artist I rember when I was young there was a juried system where you got to go across the country and visit artists in their studios. We had an Art Bank (government purchases) and we were constantly on the road.

CG There were the (alternative government supported) Parallel galleries.

WK Yes there still is a large system of Parallel galleries.

CG I recall visiting a number of them along Saint Laurent in Montreal.

WK Some of them continue but it is not as robust a scene as it once was.

CG Can I get you together with Michael Snow for a photograph?

Michael Snow Oh hi. I guess this is your piece, I glanced at it. Is it a new piece for this exhibition?

WK I showed it a few years ago in Montreal.

CG This is a classic image. I wanted to get the seniors in the show together.

MS (laughing) She doesn’t qualify for that.

CG Both of you are showing at Mass MoCA with much younger artists. When you both were their age it was much tougher to get exposure as Canadian artists.

MS I suppose. I don’t really know. Maybe. What does it compare to?

WK When we were younger everything was snail mail. I got a letter from the Walker inviting me for an exhibition and I was terrified. I just ignored it. Now we have all this social networking. So there is a kind of fluidity about how artists get their work out.

MS In the mail and phone days that’s how exhibitions were organized. Everything is a lot faster now.

CG You have always been involved with media, film/ video, technologies and non traditional materials.

MS Yeah. I did a piece called De La which was a 1971 video installation.

“De La was originally designed for the artist by Montreal technician Pierre Abeloos as a machine mount in order to facilitate the highly complex movements of a 16mm camera for the filming of La Région Centrale. Now as De La it is a closed circuit television system, the camera moving in various programmed patterns relaying its results to the four monitors, each one in a corner with screen aimed toward the machine sculpture situated on a pedestal in the center.

”…now mentioned that when in the course of construction he began to see how beautiful the machine was, he began thinking of other ways in which he might use it as an object in itself. This is not a new phenomenon in Snow's history. He often uses old art in order to make new art. "Walking Woman" figures, the formal device of an important six-year project of Snow's have a significant place in Wavelength. A Casing Shelved (1970) becomes an artistic autobiography with Snow on audiotape explaining the objects and their uses in his past art-making depicted in the projected slide. The bookcase of A Casing Shelved is the one used in Wavelength. The film, One Second in Montreal of 1969 consists of 31 still photographs of potential sculpture sites in Montreal parks, sent to Snow years earlier for his consideration.

”De La was over a year in the making. Sets of axles on the mount permit multiple kinds of movements at once. The options for movement are horizontal, vertical, rotational, zoom, and camera start, along with speed variables for each one. The machinery can be programmed to perform combinations of movements: rolls, spins, circles within circles and cycles within cycles, figure eights, arcs, scallops, sweeps, zigzags, horizontal shifts, mobius strips, etc. The camera may pan and zoom simultaneously or the image may turn in the frame while it is being zoomed in and out. It was made to be programmed by remote control, either through use of prescored audio tapes or else by dialing a console.

”After months of searching, Snow resorted to maps and aerial photographs and finally found a location for La Région Centrale which could only be reached by helicopter. It was a remote region of northern Quebec with absolutely no human markings of habitation or conquest, not even a telephone pole. Snow hid his console behind an enormous boulder and set up his camera on a cold mountain top with rocks, more boulders, surrounding hills, a lake below and clear sky above. As with De La, the film camera never records its mounting device - though occasionally its shadow is visible - while no human presence is seen or heard through the film's 3 hours 20 minutes. In its 17 sections of differing lengths separated by bright yellow Xs the film begins about noon, proceeds to mid-afternoon, continues from sunset to night to sunrise, and ends about noon. The camera looks and sees but never conquers. It maintains its distance as it abstracts the sublime landscape, moving back and forth between the representational and the abstract in a work of intense contemplation.

”De La comes out of La Région Centrale's making but is now totally separate from it, a work redesigned for video installation. Both works exhibit the intense perceptual concerns combined with intellectual and analytical ones peculiar to the Snow-bound camera.” Regina Cornwell

That must be one of the first video installations.

CG Does the work survive?

CG Has it been transferred to DVD?

MS No. No. I had a live camera. I had this machine built to move the camera in certain ways. It’s three hours.

WK I watched it. La Région Centrale. I saw all three hours of it.

MS As you should have.

CG When did you start exhibiting internationally?

CG So Canada is your place of residence but you show globally. So do you see yourself as a Canadian artist?

MS I practically never show in Canada. This year I showed in New York, in Istanbul and Vienna. I’m working on a show for the Philadelphia Museum. Before that I did concerts and shows in Barcelona and Madrid. London.

CG Why not Canada?

MS I had a huge show at the Power Plant (Toronto) three years ago. Or is it two? I don’t know. And that’s it. I’m totally busy. I could find room. In Canada I don’t get asked that much. Maybe it’s a seniority thing.

CG You don’t get asked by whom?

MS By museums elsewhere in the country that might have exhibitions. Occasionally something comes up. I’m sort of part of the past for some people.

CG How does it feel to be showing with the kids?

MS Well I’m not a part of the past because in New York (Jack Shainman Gallery) the Canadian National Gallery is buying two huge projection pieces. They already have seventy things of mine that they bought over the years. The fact that they would buy something new is really terrific.

CG How does it feel to be show here with younger artists?

MS I don’t know if they’re young or not I just look at the work.

CG Are you interacting with them?

MS No. Not really because I’m working on my own thing. And we have conversations. They seem nice but they are gone through pretty fast.