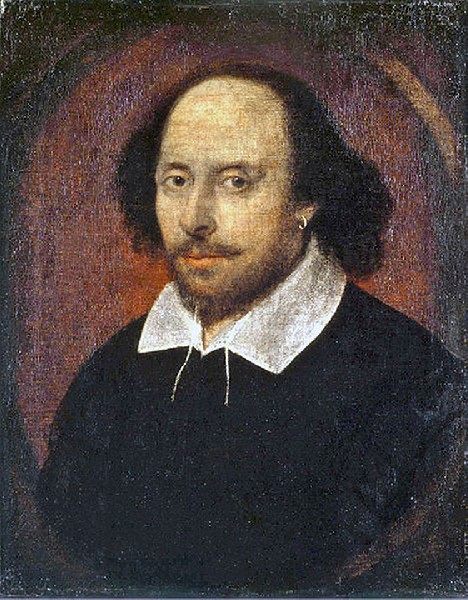 The 450th anniversary of Shakespeare’s birth 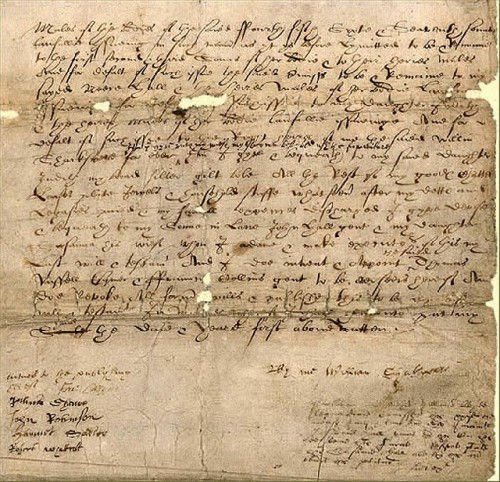 Detail of Shakespeare’s will. 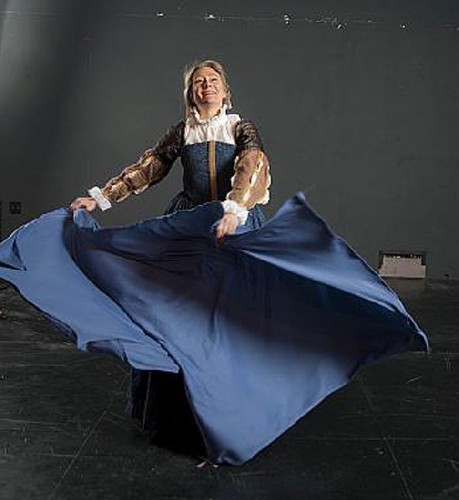 Last night the 37th season of Shakespeare & Company was launched with a one woman play starring the sprightly and redoubtable Kristin Wold in Vern Thiessen’s Shakespeare’s Will.

Oddly, during a season celebrating the 450th anniversary of the Bard (1564-1616), this rich and lively drama takes poetic license in fabrication of a collage of aspects of the slimly documented life of his wife, and mother of their three children, Anne Hathaway (1555/56-1623).

At the outset you will note that she was 26/27 when, great with child, they married. He was just 18, of lesser station, and with few prospects.

What little fact is know of her famously focuses on Shakespeare’s will, the subject of this one act play, in which he leaves her his “second best bed.” The house Anne lives in was bequeathed to his sister.

Going on those slim facts the playwright has elaborated on their less than ideal and long estranged relationship. By mutual agreement on the wedding night they pursued separate lives in what today would be an open marriage. It allowed him to spend most of his life as a successful playwright and entrepreneur in London. After retirement from theatre, following the death of his long time lover, he returned and lived with her during his last three years.

With his sustained absence and infrequent visits, as an abandoned wife, she was more or less free to seek sexual satisfaction which Wold details with amusing relish. During their initial dalliance, he may have been a virgin, it is revealed that what they had in common was liking boys.

In a season which will be dense with plays by Shakespeare this is a risky but successful programming decision by artistic director Tony Simotes. It might have been better to provide audiences with a bit of sorbet to clear the palate. The company is betting all in that on this historic occasion audiences will ravenously feast on the Bard. In that regard the program is less balanced than in recent years.

More than any other Berkshire organization S&Co. is all about family, loyalty and opportunity. This is Wold’s 25th season and Varon’s 19th. The production abundantly reveals their depth and originality. It proves to be a most serendipitous collaboration.

A couple of season’s back Wold’s sprightly, playful Ariel was one of the great delights of The Tempest. That same naturalness and whimsy informs her multi valent and complex Hathaway. Her stage manner is so accessible and communicative that she is vulnerable and endearing. That was best revealed last night when she stopped the dialogue while struggling with a costume malfunction. She had trouble unhooking and removing a skirt. When eventually she did with a gentle and knowing smile the audience erupted with applause.

This hearty response also occurred when she enacted her bellowing and disapproving father. He railed against her liaison to a Catholic of no means and the son of a Shakespeare! Then, good grief, he abandoned her to pursue a life in theatre!

When the audience howled its approval of enacting her outraged father she looked back at us with a conspiratorial smile that conveyed ‘this is fun isn’t it.’ You wanted to reach out and give her a big hug.

The staging and direction give her a lot to do with many props, sound and lighting changes that convey different voices, characters and mood shifts. She is so busy navigating through and shifting about all those props that she keeps us entirely distracted from what could be an enervating monologue.

Much is done with the costumes designed by Govane Lohbauer. Through the evening she keeps removing layers until finally down to her Elizabethan skivvies. She first appears home from the funeral wearing a veil over a cap. Removing them she shakes out her mop of blonde hair. A cloak is hung on a hanger and then wafted aloft out of sight. The veil, once removed and held with an out-thrust arm, become Anne’s despised sister-in-law.

She is coming that evening to discuss the will which Anne puts off reading. Eventually it will lead to the shattering climax of the play.

While Wold is a heart warming actor, and I love her to death, interludes of song and dance stretched her limits. While light on her feet and a wonderful dancer her vocal ability and range is limited. She did her best with four songs original to this production the lyrics to two of which were written by the director.

Early on we have a faltering dialogue with vocal shifts between Will and Anne. He is shy enough for her to say with milked irony “He’s a man of few words.”

The young Will is just beginning to explore writing poetry. In his voice she reads a sonnet said to be written for her.

Those lips that Love's own hand did make
Breathed forth the sound that said 'I hate'
To me that languish'd for her sake;
But when she saw my woeful state
Straight in her heart did mercy come,
Chiding that tongue that ever sweet
Was used in giving gentle doom,
And taught it thus anew to greet:
'I hate' she alter'd with an end,
That follow'd it as gentle day
Doth follow night, who like a fiend
From heaven to hell is flown away;
'I hate' from hate away she threw,
And saved my life, saying 'not you.'

As Will he explains to her that the words “hate away” reference Hathaway. While he dedicated a poem to her, how sweet, he never managed to buy her a wedding ring. The initial excuse was that he could not afford one. Several rings, however, were bequeathed to his associates.

Although their daughter Susanna was an accident they later had twins Hamnet and Judith. Based on this later consensual sex there is some evidence of affection. From afar, in brief notes which she reads, he has a distant interest in her and the children. As his status and fortunes improved he supported the family in some comfort including two servants.

In a telling scene the children ask what their father looks like. In another she fantasizes sitting like a bird in the rafters of the theatre and then flying home with his words in her beak to feed them.

With Shakespeare a truly remote and distant character we focus on Anne as a single mother coping with the horrors of the era. There is a harrowingly graphic description of the pestilence that took her mother. The family escaped to a seashore cottage for several months. Upon their return her father burned their house that included the corpse of his wife.

Plague strikes again. We learn that a third of London has perished. Stratford is about to be quarantined but she prevails on a servant to drive them to the sea. It brings salvation and happiness. Until a terrible accident that claims Hamnet or as he prefers Henry.

Thiessen has taken the liberty of using the death of Shakespeare’s son and heir as somehow her fault. As such it is his bitter excuse to slight her in the will. This is further concocted into her alleged suicide through guilt/ grief and being left with no means.

Scholars speculate that Hamnet died of the plague. We know that Anne survived her husband by several years.

But why let the facts get in the way of a fascinating and entertaining evening of theatre. In this year of the Bard we learn that, like many great artists, in his private life Shakespeare was a S.O.B. And a Catholic.

During this year of the Bard, at least in this provocative play, S&Co. seems more intent on burying Caesar than praising him. For a man who wrote with such insight about women he appeared to be clueless about how to deal with a wife and children.