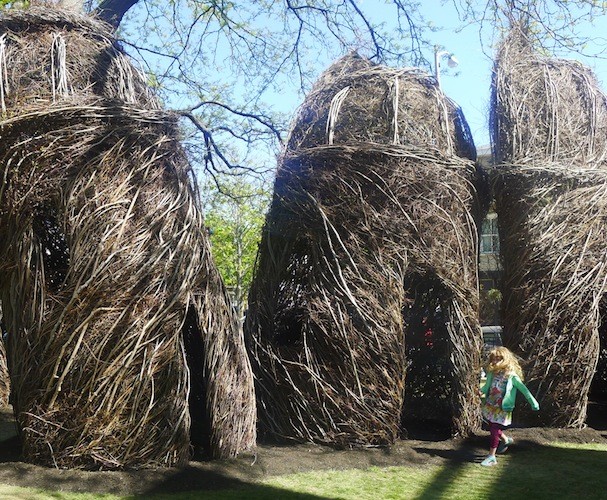 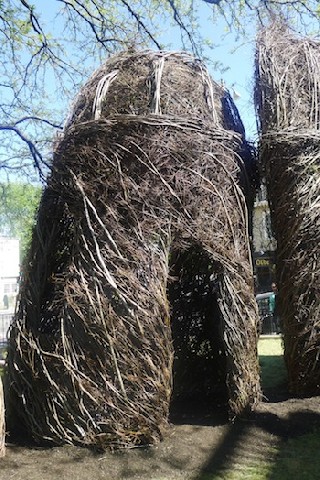 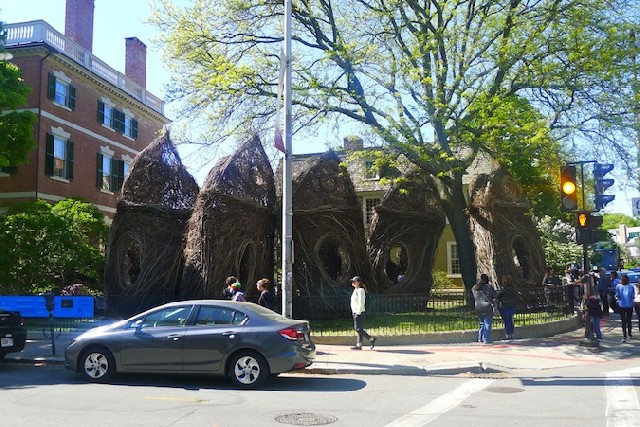 All five sculptural structures in context 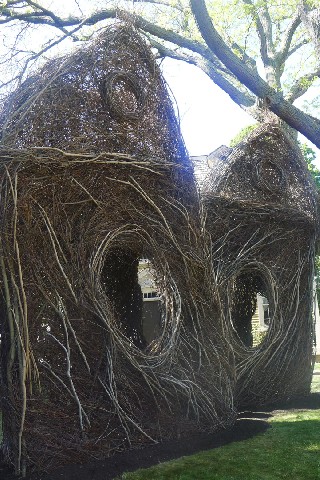 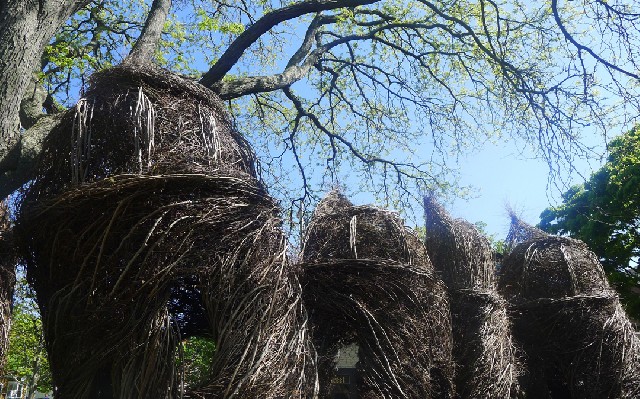 On first viewing, Stickwork generates plenty of questions. Might these be giant birds’ nests? Maybe some type of meditation huts? Or just temporary shelters for shamans?

Located in front of the historic Crowninshield-Bentley House, which sits on a busy corner of Hawthorne Boulevard and Essex Street in downtown Salem, artist Patrick Dougherty has pulled off a marvelous feat with this outdoor exhibition: he has woven bundles of branches into amazingly provocative architectural sculptures.

Salem residents and visitors were able to watch Dougherty’s creative process for the two weeks it took to construct Stickwork. Helpers even assisted with gathering saplings in Gloucester, MA. Dougherty’s approach encourages this type of interactive participatory process.

Seemingly haunted yet ethereally beautiful, these dark and mysterious structures are canopied by a large elderly locust tree. The five edifices are roughly the same size — they are two-story wood structures and establish what looks to be a small, primitive, strangely eerie, visually wind-swept enchanted village. The shapes give off paradoxical vibes.

There’s an edgy energy to the twists and turns of their branches and twigs, yet they are deftly arranged into architectural structural compositions that transmit a sense of quiet, even serene presence. Each structure is distinctive yet similar to the others. Metaphorically and physically, are these places to hide in, to explore, or to just visit? And why are they so varied?

There is an almost elemental appeal to this artist’s environmental constructs. You can’t help but think of childhood stories, Brothers Grimm fairy tales about children being lost and then found in the woods, visions of nightmare forests that are banished on waking. Whether intentional or not, there is a Wiccan aspect to the structures as well. A witch or a warlock could have just left each small building. Here nature has become a enigmatic shrine, a sacred shelter.

These wood configurations embrace nature as well as our human connection to the natural world. Their very enigmatic primitiveness asks and answers a number of questions about content as well as context. What is natural and what is man-made? What is real and imagined, even supernatural or magical?

It should come as no surprise that Stickworkcharms all ages: children play hide-and-seek while adults like to look through the opening/windows of the enclosures. Being photographed peering from one of the window openings has become a popular tourist activity.Stickwork is the first major outdoor sculptural commissioned by the Peabody Essex Museum. What a spectacular way to start!

Dougherty has become internationally acclaimed for this site-specific works, which for the last three decades have been seen built all over the world. He has created over 250 works. Combining his carpentry skills with a deep love of nature, he studied primitive techniques of building and began to experiment with tree saplings as construction material in 1982. His work evolved from single pieces on conventional pedestals to large environmental works.

Projects often require saplings by the truckloads for Dougherty’s part-sculptural, part-architectural installations. His work method is generally spread over four-hour shifts. First, structural spaces are framed out; the walls are finished before the roofs are set in place. In all cases, the artist’s eco-friendly “bricks” are made out of cuttings from young trees and saplings.

Dougherty’s pictorial intelligence should not be ignored. Spatially, this Salem installation is a brilliant aesthetic accomplishment. The grouping may be asymmetrical, but the spacial arrangement works wonderfully in its designated location. Stickwork is physically and visually balanced: it is just right for its location.

Built to accommodate only one or two people at a time, these temporary structures are both delicate yet strong. Dougherty erases the line between sculptural form and functional temporary architecture; these are living sculptures that make up a sinuous, organic configuration. Weather conditions as well as times of day change  perceptions of the structures radically: sun, nighttime, and clouds (casting shadows) lighten or darken the interior walls of each pavilion.

A built-in obsolesce adds to Stickwork appeal to the sub-conscious — from nature and then back to nature. Sustainability is a key ingredient in Dougherty’s work. The structures will degenerate over the next year. This embrace of decay is fitting for Salem, MA; it adds to the venerable magic of the setting, a sense of the shared experience of a ghostly history.

The great joy of Stickwork is how it interweaves the primal powers of myth and reality. The installation entices the imagination and the intellect. Separately or together, the five structures generate a truly potent sense of place. The unsettling wildness of the fabrication material sets up an environment that invites personal questioning. But this is not about negative introspection. Instead, Stickwork sets off reveries filled with fantasy and wonder, triggered by images of what look to be archeological ruins that viewers may already have glimpsed years or decades before — in their dreams.

This article is republished by permission of Arts Fuse where it was first published.