Tina Packer and Nigel Gore in Women of Will

At Shakespeare & Company Will is the Way 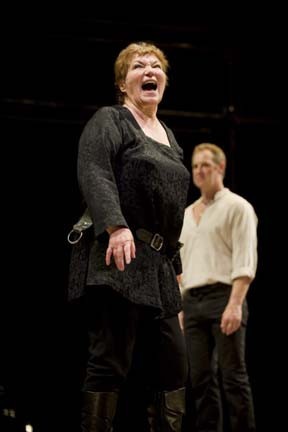 Tina Packer as a woman warrior from Women of Will. Kevin Sprague photos. 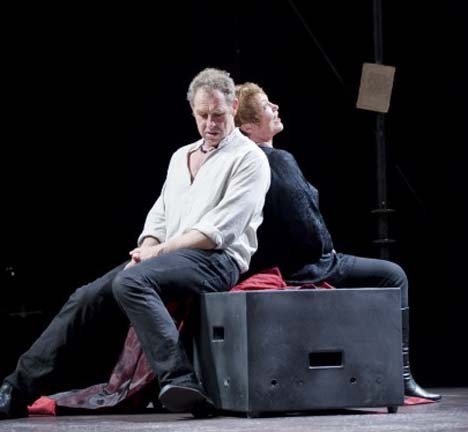 Packer has the superb backing of Nigel Gore. 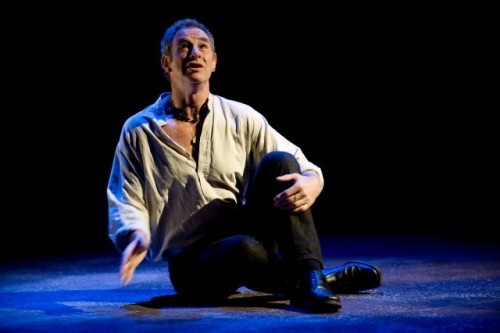 Nigel Gore sitting one out.

Interview with Tina Packer on Women of Will

Last night the 34th season of Shakespeare & Company was launched in the Elayne P. Bernstein Theatre with Tina Packer and Nigel Gore paired in Act 1: Warrior Women- From Violence to Negotiation. Tonight, Friday, through Sunday there will be a theatrical marathon with the complete cycle of five acts that comprise the compilation Women of Will: The Complete Journey.

It is a project that has occupied Packer for decades including a fellowship at the Bunting Institute at Harvard University’s Radcliffe College. Now that she has stepped down as founding director Packer is able to focus on her own projects including acting, directing and mentoring.

Simply put Packer is a national treasure and crown jewel in the tiara of artistic genius in the Berkshires. Over the past several years we have been gifted to see her stunning work on stage and to spend time with Packer discussing the craft.

It takes a lifetime to explore and understand the depth of William Shakespeare (1564-1616) and his plays- ten histories, 17 comedies, and ten tragedies written between 1589-1613.  They were created during a period of great creativity and turmoil under Elizabeth 1 (1533-1603).

Having a female on the throne during a time of religious persecution, political unrest, and war with Spain may  have influenced and shaped the thinking, not just of The Bard, but the people of Great Britain. It was actually debated whether women had souls. A rather interesting argument as that implied that the ruler of the realm was devoid of an essence and spirituality exclusive to men.

What then is a woman? It is the thesis of Packer that in the trajectory of his career, in creating 177 roles for women compared to more than 800 for men, Shakespeare evolved. As the canon developed, and Packer demonstrates and discusses over five separate performances, Shakespeare wrote roles for women with ever increased depth, sensitivity and insight.

Last season we attended the “short version” a compilation of highlights drawn from the entire cycle. We also saw Act One which was presented last evening. While we plan to cover the entire series there is a scheduling conflict that will mean spreading out the experience. One has the option of full immersion or a bit of sorbet to clean the palate between such dense and intense experiences. But all at once, or spread out in segments, this is arguably the most important theatrical event of the Berkshire theatre season.

What has been conveyed so far is that Packer is a superb, passionate and brilliant teacher. Was the evening a performance? A collage of scenes from the early comedies and history plays? Or an lecture/ workshop with illustrations?

During the first part of the performance, (a two and a half hour evening with intermission) Tina and her apt, charming and subtle partner Nigel, offered four version of Kate in Taming of the Shrew. In a time of mostly arranged marriages and union for social, political and economic advantage for the groom it was expected that the bride obey the wishes of her parents and submit, on every level, to her husband.

In the violent, misogynistic courtship of  Petruchio, a gentleman of Verona, and Katherina, however, the kitten, or pussy if you Will, has sharp claws. In the scene they portrayed he has a belt around her neck threatening to kill her if she does not submit to his Will. In her desperate protest Kate defines the essence of a woman and her relationship as servant/ mate to her husband. In four degrees of emphasis she plays the lines from purring suppliant to virago (a word used often during the performance meaning domineering, violent, bad tempered).

Going into and coming out of the scene, a trope repeated through the cycle, Packer discussed the range of possible interpretations of the roles. The richness and complexity of the writing and its many possibilities is what keeps the work alive and fresh.

But some plays more so than others.

With little of no set to speak of and a trunk of on stage props the emphais, as is the norm at S&Co., was on the skill and insight of the compelling performers. The interaction between Nigel and Tina conveyed that beyond peers and colleagues, partners on stage, they are truly friends. Having seen this first part for the second time there was an edge between spontaniety and improvisation and what appeared to be scripted.

While retaining the same essential content with some minor adjustments, a sequence from Romeo and Juliet has been deleted, the production was more organzied and cohesive. Last year Tina went off on what seemed like shapeless, self amused tangets signified by laughing at her own jokes.

Last year there were dropped lines particulary in what Gore commented on as the less familiar early series of history plays. There was only a single prompt last night. Remarkable considering that they are performing some ten hours of text.

At times it was awkward to stage and direct Nigel as Tina delivered her lessons between scenes. Now there is more balance as those elements have been refined and foused and he is given more to do than look pensive. Oddly, last night he spent some of the lecture intervals checking e mail on his IPad.

In an amusing moment Tina indicated that she was ready for her closeup Mr. Gore while Nigel responded that he was posting something on Facebook. The audience laughed but it provided a juxtaposition between illusion and reality. When he dipped into the trunk for two wigs he offered Tina the option of blonde or brunette. He seemed uncomfortable "expoloring his feminine side."

But in Tina's thesis gender bending is a major aspect of her take on the canon; the women who battle and fight, and the men who do not. She even cracked a one liner about what sex to assign to the fairies. It is essential to recall that male actors performed the female roles during Shakespear's time.

In the beginning Shakespeare wrote comedies, as they were well received, he wrote more. Tina and Nigel played a silly scene between ditzy women discussing the men in their lives from Comedy of Errors. Pulling off the blonde curls, to reveal soaking short hair, Packer stated enough of that and now let’s get serious. She informed us that early on in her career she performed many such roles. But apparently no longer.

She asked the audience how many of us had seen  Henry VI, Part I, written in 1588. Or the cycle of Henry 1V, V, and VI, that leads to Richard 11 and Richard 111. There was a sparse raising of hands. She described Henry VI, Part I as not very good. The next history plays improved gradually. They were enormously popular when they were written. For largely illiterate audiences he was creating a national identity. Packer offered a brief thumbnail of the War of the Roses and the battles between the competing houses of York and Lancaster. It ended on Bosworth Field when the Duke of Richmond, of the House of Lancaster, defeated Richard III of the House of York.

Before introducing the remarkable Margaret of Anjou, however, she performed scenes from Joan la Pucelle (Joan of Arc) the first female character Shakespeare wrote. She was the first of a number of women warriors in the canon; females that take on male personas bearing arms in combat. Initially Shakespeare appears to like the Maid of Orleans, and believe in her mystical powers. But then the writing turns and darkens as she must be identified as the enemy who fought and killed British soldiers.

This diverted into a bit of back story about 1066 and all that. And the Plantagenets with claims to the thrones of England and France that split into the Houses of York and Lancaster before merging and evolving as the Tudor dynasty.

Yes, I know, it’s complicated. There is so much to absorb.

Which, as Tina put it, led her to that second French Woman, Margaret of Anjou. She married  Henry VI who was sexually ambivalent. It is debatable whether her son and heir was by the king or her lover the Earl of Suffolk. The Duke of York, who aspires to the throne as more fit than the simpering Henry VI started a civil war. As Tina described it he locked himself into the Tower of London whenever there was a battle. He offered a compromise that upon his demise the throne would pass to the Duke of York and his heirs.

As Packer put it “he signed his own death warrant” and disinherited Margaret's son the rightful heir. She took up arms. In a powerful scene the head of the Earl of Suffolk is delivered to her. This led to the theme of vengeance which threaded through the remainder of the evening. In battle she captured the Duke of York and humiliated him before murdering him. Margaret lingers on in the history plays and Packer performed a scene between her and Richard III. He wanted to marry her daughter Elisabeth whom she was secretly negotiating to wed the exiled Duke of Richmond. In so doing she hoped to unite the warring houses of York and Lancaster.

Tina asked the audience to vote on what Margaret might have done had Richard not been defeated. Interesting. Then she returned to France.

Demonstrating another approach to the feminine arsenal, a woman who uses sexuality to exert her Will, Packer performed scenes focused on Elizabeth Woodville. For this she took off her weapons and put on a flowing ersatz gown. What followed was a segment on the Woodville clan and their power.

Elizabeth Woodville was married to a minor lord who was killed in battle. By law at the time his property diverted to the king. Deprived of land she would have no means of support for herself and three sons. She petitioned King Edward IV who agreed to allow her to keep the property in return for sexual favors. Rather than be dishonored she declined and withdrew the petition. The King was adamant and offered marriage. It proved to be a happy union. She bore him ten children, seven daughters and three sons. One of the boys died young and the other two princes were killed by King Richard III in the tower. Despite Richard III’s proposal she married her daughter, Elizabeth of York, to the Earl of Richmond, later King Henry VII. Elizabeth 1 was the granddaughter of Henry VII.

Continuing with the theme of violence and revenge Packer and Gore switched from Great Britain to Rome in scenes from Titus Andronicus. By then however, some two hours on, my attention span waned, if you Will.