From Chicago’s Lookingglass to Princeton’s McCarter 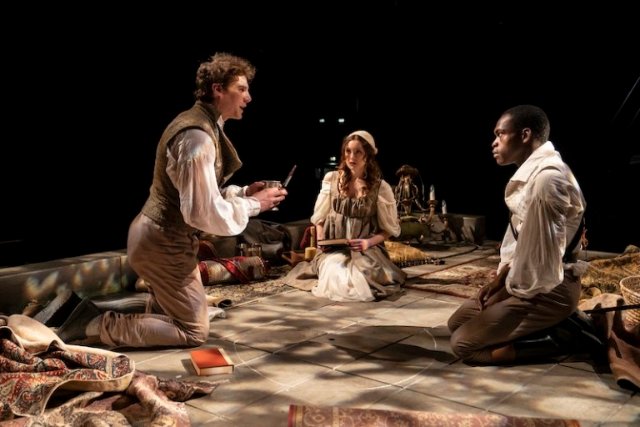 Last year was the 200th anniversary of the publication of Mary Shelley’s landmark horror novel, Frankenstein; or, The Modern Prometheus, which explains why we have been able to see four different versions of the Frankenstein story on stage in during this theater season.

The final production of this series is Lookingglass Theatre’s Mary Shelley’s Frankenstein, written and directed by David Catlin, which wraps the story of Mary Shelley the writer around her story of the doctor and his creature. With assistance from the Actors Gymnasium, the Lookingglass crew creates a dazzling staging of the story.

It begins with five young people sitting around a fire, drinking wine, during a rainy evening at a villa on . The five are Mary Wollstonecraft Shelley (Cordelia Dewdney); her  husband, Percy Bysshe Shelley (Walter Briggs); his friend, the poet Lord Byron (Keith D. Gallagher); Mary’s stepsister, Claire Clairmont (Cruz Gonzalez-Cadel); and Dr. John Polidori (Debo Balagun). They amuse themselves telling ghost stories and Byron suggests a competition in which each will write a ghost story. Mary has trouble getting hers started, but during a late-night discussion on the principles of life, she begins to develop the idea that an inanimate creature might be returned to life. Her imagination soars with the idea of a scientist—Dr Frankenstein—eventually re-creating human life.

As Mary’s ghost story comes to life, Dr. Frankenstein (Briggs) leaves his home to study this science; he’s obsessed with the idea of reanimating lifeless material and succeeds years later when his creature (Gallagher) comes to life. The lonely mute creature roams the countryside and finds that, although he wishes to befriend others and learn their language and their ways, his appearance makes that impossible. He demands that the doctor create a mate for him, promising they will travel far away and never return. Meanwhile, the doctor has returned from his studies to reunite with his dear friend and fiancée Elizabeth (Dewdney). Unfortunately, the creature has learned where the doctor lives and tracks him there.

The stunning Lookingglass production uses projections, ropes and pulleys, a plastic-sheeted chamber, floor-traps, and the stairways, ladders and catwalks of the waterworks theater space. (At intermission, it’s fascinating to watch the crew and actors prep the stage for act two.) Daniel Ostling’s scenic design combined with Catlin’s direction takes full advantage of the athleticism and physical training of the Lookingglass ensemble, coached here by circus designer Sylvia Hernandez-DiStasi. The rigging is designed by Rigability Inc. Lighting design is by William C. Kirkham and sound design and composition by Rick Sims. Sully Ratke’s costuming is ingenious and flexible, taking characters from ocean voyages to luxury villas to the arctic and back.

The cast of five is superb in its demanding double- and triple-role casting. Dewdney is fresh and almost ethereal in her roles as Mary and Elizabeth. Gonzalez-Cadel (notable for her award-winning performance in Lela and Co. at Steep Theatre) excels at every turn, as do Briggs, Gallagher and Balogun.

Popular culture has many variations on the Frankenstein story. Of the dozens of film versions, two are particularly famous—James Whale’s 1931 version starring Boris Karloff as the monster, and Mel Brooks’ 1974 comedy/horror film, Young Frankenstein, starring Gene Wilder as a descendant of the doctor and Peter Boyle as the monster. Both are enmeshed in pop culture beliefs about the nature of the “Frankenstein monster” and focus on the horror aspect of the story. This year’s theatrical productions rise far above pop culture to tell the sad and romantic story of Mary Shelley’s own life and her masterwork.

Of the three versions staged last fall, Court Theatre’s version tells the Mary Shelley story through the brilliant modern and retro-tech talents of Manual Cinema performers, musicians and technicians. Remy Bumppo’s production utilized British playwright Nick Dear’s adaptation (also seen in the National Theatre Live production), which focuses on the creature’s origin story and sees the world from his lonely perspective. And Lifeline Theatre’s production built on the origin story, but flipped genders to cast a female actor as Victoria Frankenstein. All told, it’s been a stunning anniversary year for Mary Shelley’s masterpiece.

Mary Shelley’s Frankenstein continues through August 4 at Lookingglass Theatre, inside the historic Water Tower Water Works. Running time is 2.5 hours with one intermission. Tickets are $45-$86 for performances Tuesday-Sunday with afternoon performances on weekends and some Thursdays.

Following the run, Lookingglass will transfer Mary Shelley’s Frankenstein to the in , for a three-week run.