Method in His Madness 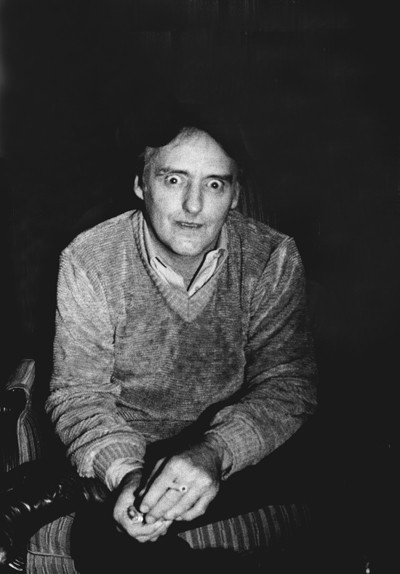 I shot this image of a strung out Dennis Hopper in 1980. 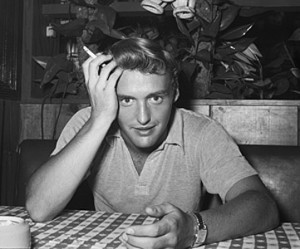 A budding actor in 1955 on the set of Rebel Without a Cause. 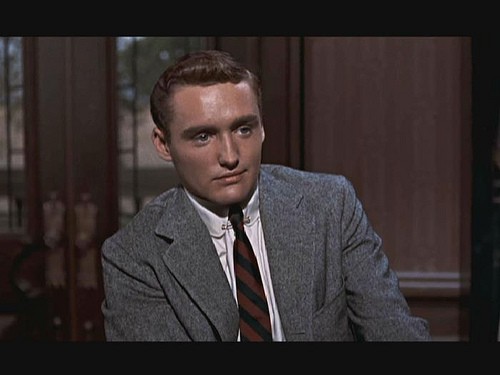 Hopper had a small role in the epic Giant. 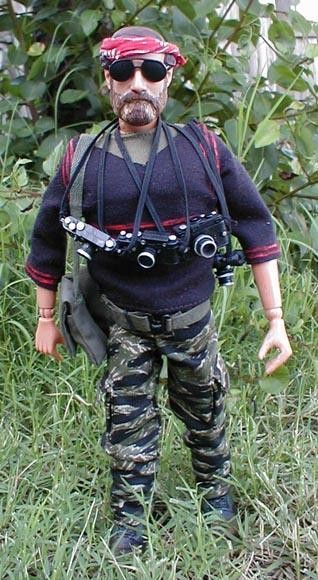 Coppola draped Nikons around his neck in Apocalpyse Now. 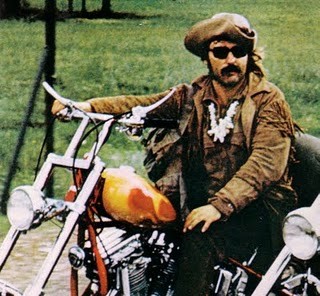 As a biker in the cult classic Easy Rider in 1969. 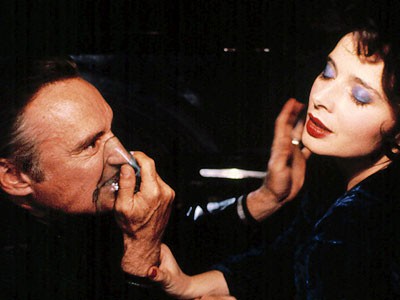 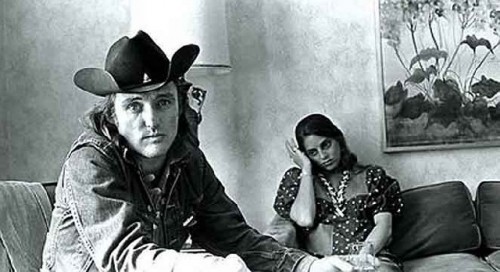 With his wife Daria Halprin. 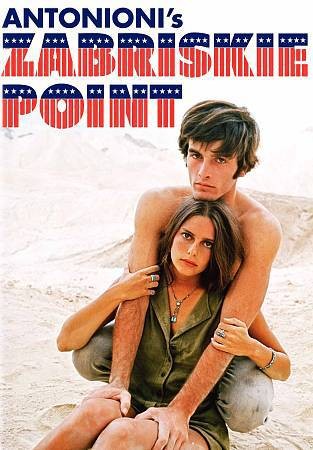 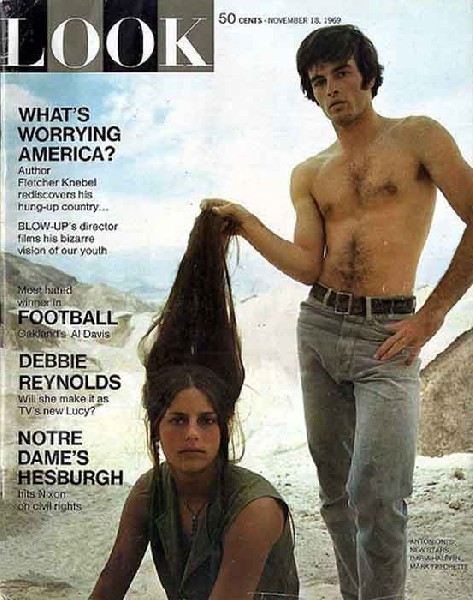 Fifteen minutes of fame on the cover of Look Magazine. 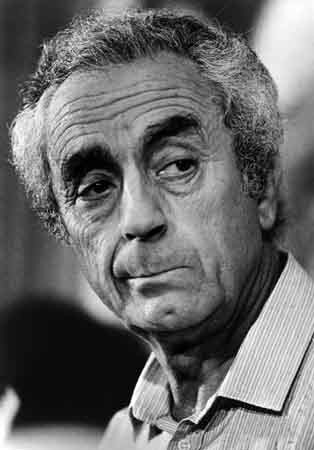 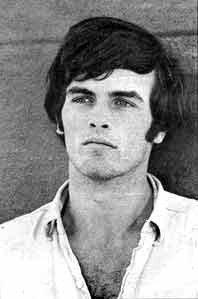 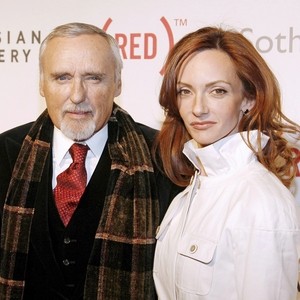 Hopper with his fifth wife Victoria Duffy whom he barred from his funeral.

Dennis Hopper, who died on May 29 at 74, struggled with his demons not only during a frenetic, total gonzo life and career, but even beyond the grave.

One of his last acts through an attorney was to ban his wife of 14 years, the last of five, Victoria Duffy, from attending his funeral. Since she was banned their daughter, Galen (one of three), did not attend.

Hopper was notorious for  women troubles. His second marriage to singer Michelle Phillips lasted just two weeks. The others were to Brooke Hayward, Daria Halprin, Katherine LaNasa, as well as Duffy.

Reviewing the artistic career of Hopper’s 150 films one is struck by what might have been. There were brilliant flashes. He started with great promise in minor roles in two of the three films made by James Dean: Rebel Without a Cause (1955) and Giant (1956). In 1959 he studied Method Acting in Lee Strasberg’s Actors Studio.

Ten years later Hopper teamed with writer Terry Southern and the actors Peter Fonda and Jack Nicholson to create the cult classic Easy Rider. There were epic disputes during the making of the film. Southern asked to take his name off of the credits. Hopper fought with Fonda over sharing profits. The film was long out of release because of disputes.

He was later sued for libel by Rip Torn for stating during a TV interview with Jay Leno  that Torn pulled a knife on him. Torn was to have played the role performed by Nichelson. In court Torn claimed that it was Hopper who had pulled the knife. Torn won and was awarded $450,000 in damages.

During an afternoon interview at Boston’s Copley Plaza Hotel, in 1980, Hopper was alternatively insightful, melancholy, poignant, and deranged.

He was touring to promote a film Out of the Blue. When it faltered in production Hopper took over as producer, director and actor. It was critically well received but is now regarded as a minor work.

The film was presented at the Coolidge Corner Theater, an independent art house, then managed by Justin Freed. He was the brother of a Boston Latin School classmate, Ken Freed, an important collector of contemporary art.

The media was slotted into a schedule of 45 minute appointments. I caught Dennis late in the afternoon and he was pretty wasted. It has been reported that his coke habit was about three grams a day at the time. In addition to beers, pot, and hard booze.

Several times he excused himself. He returned ever more wired. It was after one of these snorts that I snapped the picture, an icon of the era, that accompanies this article. He gave me the freaked out look that resulted in a riveting image.

After I snapped that shot, one of several, Hopper turned to Freed and quipped “Guess that’s the one they’ll use.” He appeared to view his outrageous behavior as part of the act which stoked the muse that drove his creativity. Hopper was not alone in following that disingenuous mantra. It deluded many of us during that time of drugs, sex, and rock ‘n’ roll. Too few of us have survived to utter “Call me Ishmael.”

Yes, it was a great shot but unfortunately a lousy negative. Back then I was push processing Tri X. The frame proved to be impossible to print. Now brought back to life through Photoshop. My young artist friend Andrew Klass wants to borrow the image to make a scratch board portrait.

Shortly after my session with Hopper I compared notes with Kathy Huffhines a brilliant young movie critic for the Real Paper and later Detroit Free Press. It seems that she was the last appointment of the day. They attended the premiere together and partied that night. Boy, did she get an interview. Unfair competition.

Kathy died a year or two later in an accident. A tree fell on her parked car. By 1983 Hopper entered rehab.

In 1986, having been virtually banned by the major studios he made a comeback starring in David Lynch’s Blue Velvet. His other great role was in Apocalypse Now (1979). There were 150 films and some 180 TV episodes. He was always interesting but never accomplished the top tier achieved by his peers Brando, Nicholson, and Dean. One feels that he rarely reached his full potential.

There is, however, a remarkable diversity to his career. He had many interests as an artist, photographer, and collector. Hopper is recalled as one of the signifying characters and personalities of his generation. Even if he voted Republican; which is a true testament to his deranged state of mind.

I asked him about his art collection and photography.

He told me that he started to buy art with the money he made from shooting Giant. At the time he was living in New York and hanging out with artists. Many works he bought directly from their studios. That was in the mid 1950s. He acquired a lot of pop art. By 1980 when we spoke it was worth millions.

When I asked what had become of the collection he slumped in despair. He explained that it was sold to settle a divorce from Daria Halprin in 1976.

There is an interesting back story to Halprin. She was the female lead in Michelangelo Antonioni’s film Zabriski Point (1970). When the Italian director of L’avventura (1960) and Blow Up (1966) was casting for the male lead a call went out in Boston. Every stud in town showed up to audition.

An assistant to the director encountered Mark Frechette in a rage on Charles Street. The then drifter, drop out, and panhandler was asked to audition. He had read a copy of Avatar and fell under the sway of Fort Hill guru, Mel Lyman.

The film was much anticipated but proved to be a bomb that predated Oliver Stone’s similarly ambitious and pathetic Natural Born Killers. Both films have their delusional defenders.

It earned Halprin and Frechette their fifteen minutes of fame. Both made a couple of forgettable films. During a brief affair Frechette brought Halprin with him to Fort Hill. He turned over his $60,000 from the film. Halprin soon left the cult. A couple of years later Frechette and two commune companions robbed a bank. It was a reflection of the Lyman mantra of “being real.”

One of the robbers was killed by police during a shootout. Frechette, whose gun wasn’t loaded, was convicted. He died in prison as the result of an “accident.”

Because of his love of photography Hopper told me that is was Coppola’s idea to drape Nikons around his neck for a role as a reporter in Apocalypse Now.

By then it was time for Hopper’s next appointment.

Cripes that was 30 years ago. But the experience was so intensely vivid it seems like yesterday.

Dennis Hopper was a piece of work. Later man.