Mengelberg and Mahler at Shakespeare & Company 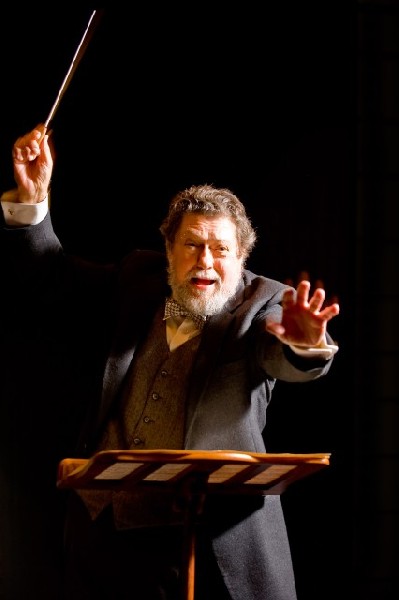 Mengelberg and Mahler by Berkshire based writer Daniel Klein has its world premiere at Shakespeare & Company.

When society runs amok, must an artist risk everything to oppose it—or simply do what he can in order to survive? This question lies at the heart of Mengelberg and Mahler, the provocative new play by Berkshire playwright and bestselling author Daniel Klein that receives its world premiere this summer at Shakespeare & Company. Company artist Robert Lohbauer delivers a powerhouse performance in this one-man tour de force, directed by S&Co. newcomer, celebrated Dutch filmmaker Emile Fallaux.


After fifty celebrated years leading the Concertgebouw Orchestra in Holland —during which he famously championed the work of Jewish composer Gustav Mahler—maestro Willem Mengelberg is faced with the unexpected prospect of exile, in retribution for his perceived collaboration with the Nazis during their occupation of The Netherlands. During the war he was pressured to dismiss the Jewish musicians in his orchestra, while remaining determined to perform Mahler’s music at any cost.  But when the line is always shifting, how does one know when it’s crossed?

“Three of my major interests converge in this play. My lifelong love of Gustav Mahler’s music; my 50-year fascination with moral philosophy, and, most importantly, the inspiration of my wife’s parents, both of whom took major risks to work in the underground during the Nazi occupation of The Netherlands,” remarks playwright Klein. Klein’s latest novel, The History of Now, recently won the Silver Award for best novel from an independent publisher at this year’s Book Expo, and is a finalist for the 2010 Massachusetts Book Award.

Mengelberg and Mahler is based on a screenplay co-authored by Klein and Fallaux , a Dutch journalist , filmmaker , and noted enthusiast of the works of Mahler. “My parents were in the Dutch Resistance and they hid a Jewish family in their modest house,” says Fallaux. “In Europe , even in the second and third generation removed from the War , we have grown up with the impossible dilemmas that people face in the pressure of violence and conflict. I have never , ever taken it for granted that I would act as my parents have done , that I would be as brave as they have been.”

“At what point do you become guilty? I’d like the audience to identify with Mengelberg’s dilemmas , not to see him from the outset as an evil man who has collaborated with the Germans , but to find him complex—he’s sympathetic at times , and he’s pathetic at times,” Fallaux continues. “There’s no clear-cut answer. One should ask oneself: What would I have done?”

Set in Mengelberg’s Swiss home-in-exile after World War II, the play dramatizes the defeated conductor’s erratic consciousness as it looks backward and reenacts his deep friendship with Mahler, his encounters with the German officials, his interactions with members of his orchestra, and testimony before the Dutch Council for the Arts that has sent him into exile.  Like a Mahler symphony, his moods move from the elegiac to the tempestuous, from the sublime to the mundane.  He rants, he pleads, he lectures, he charms.  And above all, he argues with the memory of his beloved collaborator in music, Gustav Mahler.

Mahler is an unseen but fully-present character in Mengelberg and Mahler.  He is Mengelberg’s cherished friend, his inspiration, his conscience, and ultimately his spiritual salvation.  Mahler’s music—parts of his 1st, 2nd, 4th, and 5th Symphonies, plus "Wenn dein Mütterlein" from the Kindertotenlieder—is a full partner in this production.  These musical portions do much more than set the scene: they are essential to Mengelberg’s understanding of his own life.

DANIEL KLEIN (playwright) is the author (with Tom Cathcart) of the New York Times bestseller, Plato and a Platypus Walk into a Bar.  A graduate of Harvard in philosophy, he has written or co-written over thirty other books including The Half-Jewish Book.  His most recent novel, The History of Now, won the Silver Award for best novel from an independent publisher at this year's Book Expo,  and is a finalist for the Massachusetts Book Award (2010). He lives with his wife, Freke Vuijst, the American correspondent for the Dutch weekly, Vrij Nederland, in Great Barrington ..

EMI L E FA L L AUX (director) has combined a lifelong career in journalism with both a practical and a political commitment to the arts. He recently retired as the editor-in-chief of Vrij Nederland , a leading Dutch weekly that was founded as an anti-Nazi publication during WWII. With Daniel Klein he wrote the screenplay ‘The Titan’ on which the play ‘Mengelberg and Mahler’ is based.
He has worked around the globe as a correspondent and documentary filmmaker for public television in Europe, and was stationed for longer periods in New Delhi ,  New York , Central-America, and Irkutsk . He won awards for creating innovative television and for best TV-program of the year.
Fallaux attended Theatre School in Arnhem and Amsterdam , and has worked in film. He wrote and doctored screenplays and directed the feature movie ‘Liefje’. He took over the director’s seat of the International Film Festival Rotterdam, with 350.000 tickets sold one of the world’s biggest festivals, known for it’s dedication to independent productions, new talents and cinephile tradition. He directed the yearly Cinemart where selected film projects are linked to financiers, and the Hubert Bals Fund which gives financial support to moviemakers in developing countries. Today he sits on the selection committee of this fund. Fallaux has been a jury member at festivals in various countries, He is a co-founder of the National Film Fund of The Netherlands, as well as of the Rotterdam Media Fund and of the Fund for Special Projects in Journalism. The Dutch government appointed him to the boards of the Holland Festival, the Fund for Cultural Broadcasting and the National Film Fund. He is the chairman of, among other cultural organizations, SubmarineChannel, an online project for digital animation and other art forms. SubmarineChannel produced the first movie shot in Second Life, shown by HBO.
Fallaux has served as a board member of the Prince Claus Fund, as a member of its Award Committee and as the chairman of its Library Committee. He continues to serve the fund as the chairman of the International Advisory Committee. After the Mengelberg and Mahler season he will return to writing.