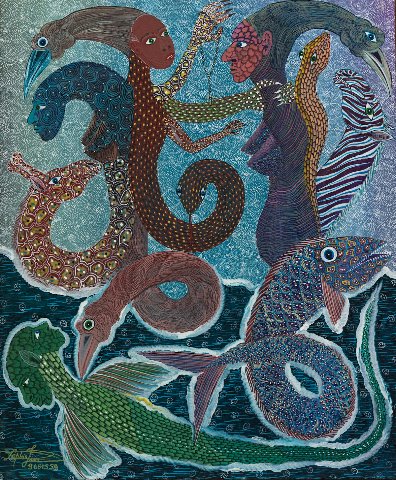 The Williams College Museum of Art (WCMA)  presents Frantz Zéphirin: Selected Works, an exhibition of ten paintings by the renowned Haitian artist, whose work is also featured in the 2022 Venice Biennale. Tomm El-Saieh, a Haitian-born artist and curator who lives and works in Miami, organized the display for WCMA. El-Saieh’s work is the subject of Tomm El-Saieh: Imaginary City, a year-long solo exhibition at the Clark Art Institute.

The selection of paintings on view at WCMA offer a window into the deeply mystical and spiritual nature of Haiti (Ayiti), the land of many mountains. Zéphirin’s paintings document scenes of Haitian spiritual life both materially and metaphysically, a pictorial practice that has a long tradition in Haitian art. Referencing Christian and modern Vodou practices within the ever-expanding cosmology of the spiritual world in Haiti, Zéphirin’s art is saturated with bright colors, patterns, and tightly compacted compositions of anthropomorphic animal imagery.

Influenced by West African religious practices that survived the transatlantic slave trade, Vodou practitioners creolized the images of Catholic saints and martyrs to represent loa (Haitian deities) as a means of subverting colonial French authority and maintaining their own cultural and religious practices. Zéphirin, who is both an artist and houngan (Vodou priest), intervenes in this practice by depicting the loa either as animals, or surrounded by them. As Zéphirin explains, “Look closely, in every person there is an animal; a monkey, an elephant, a crocodile, a giraffe… I see them in a gesture, an attitude, a character trait, and immediately fix them on the canvas.”

Zéphirin was born in Cap Haïtien, Haiti on December 17, 1968. Immersed in art from a very early age, he spent countless hours with his uncle Antoine Obin (1929–1992), grand master of the Cap-Haïtien School of painting, who in turn had studied under his father Philomé Obin (1892–1986)—widely considered one of the greatest Haitian painters of the 20th century. Zéphirin began painting at five years old; by eight, he was selling his art to tourists whose cruise ships docked in Le Cap, and by thirteen, gallery owners were purchasing his work.

Zéphirin later moved to Port-au-Prince and became affiliated with Galerie Monnin. By his late twenties, his work had started to garner international recognition. In 1996 he won a gold medal in the Third Biennial of Caribbean and Central American Painting at the Museum of Modern Art in the Dominican Republic. That same year, he was one of five Haitians selected for the 5th Cuenca Biennial in Ecuador. In 1997 and 1998, two of Zéphirin’s paintings toured the United States in the landmark exhibition Sacred Arts of Haitian Vodou, organized by UCLA’s Fowler Museum of Cultural History, with subsequent presentations in Miami, Chicago, Detroit, Washington, D.C., New Orleans, and Baltimore.

After the devastating earthquake in Haiti in January 2010, Zéphirin’s painting The Resurrection of the Dead (2007) appeared on the cover of The New Yorker. Later that year, Smithsonian Magazine commissioned the artist to create a painting for their September issue, which was auctioned to benefit the Smithsonian’s art conservation and cultural recovery project in Haiti. Zéphirin continues to exhibit his work internationally, and was included in the 2020–2021 exhibition Haitian Masterworks at the Figge Art Museum in Davenport, Iowa, where his work is part of the museum collection.

Organized by guest curator and artist Tomm El-Saieh (b. 1984, Port-au-Prince, Haiti; lives and works in Miami) in conjunction with the exhibition of his paintings, Tomm El-Saieh: Imaginary City on view at the Clark Art Institute through December 31, along with WCMA Mellon Curatorial Fellows, Jordan Horton, MA ‘23 and Destinee Filmore, MA ‘24.

In connection with the exhibition Frantz Zephirin: Selected Works, Kriyol Dance! Collective (KDC) will perform a new, original work, Rasin San Bout (“Endless Roots” in Haitian Creole) at WCMA. The performance explores ideas of immigration, migration politics, and acculturation as critical factors influencing the health of Caribbean immigrant communities, and particularly Haitian immigrants whose status as “immigrant” remains endemic in global and U.S. political news, and whose sheer numbers make up what may be the bulk of the immigrant population in KDC’s hometown, Flatbush, Brooklyn. A reception on the museum patio will follow.

Kriyol Dance! Collective is a collective of artist-leaders working on one platform, to advocate for the unapologetic voices of Black arts through collaborative community organizing work and performance-based intervention. KDC uses art—dance, music, and spoken word—as a tool for commentary, creating original work focused on the preservation of Black diasporic culture and Haitian culture.  KDC exists as a platform to promote community collaboration and wellness.