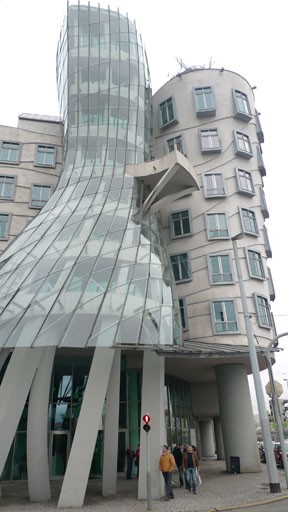 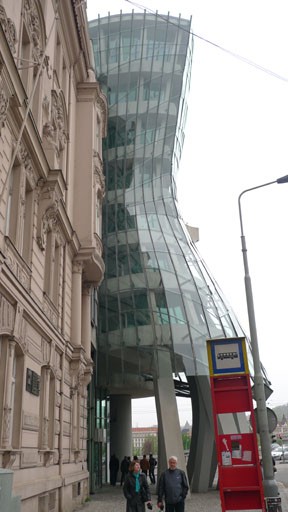 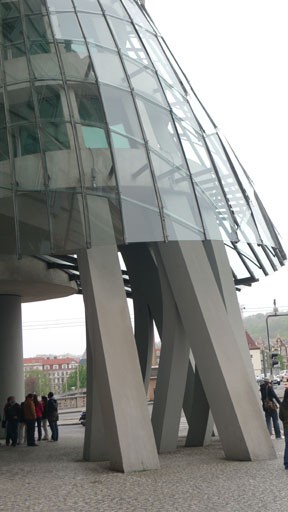 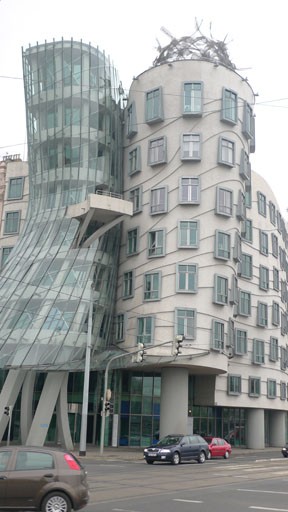 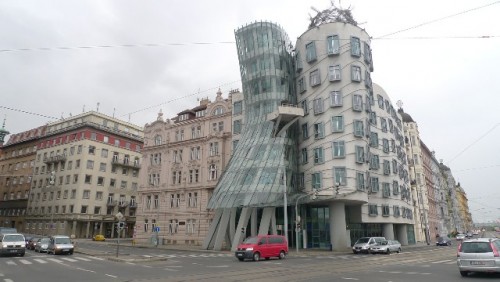 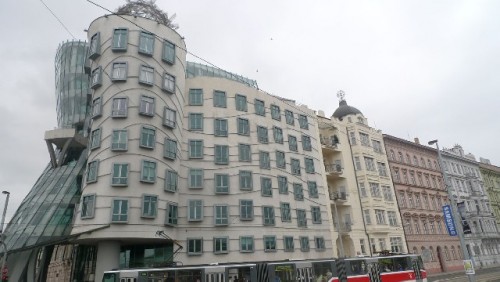 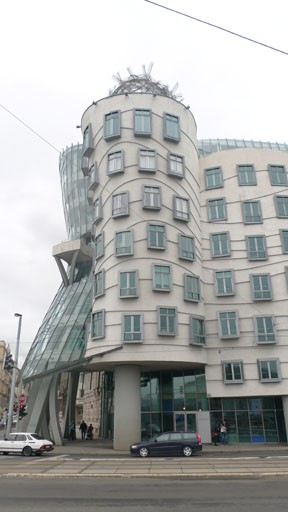 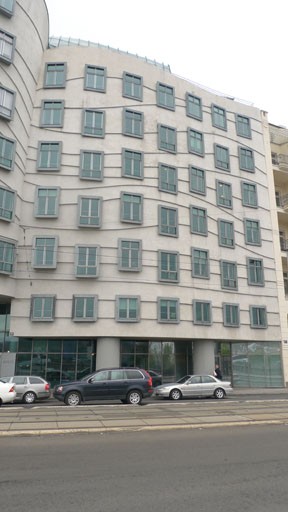 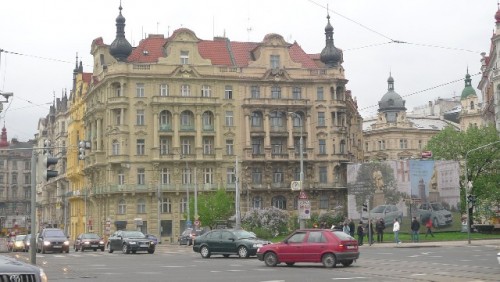 Buildings Directly Across the Street 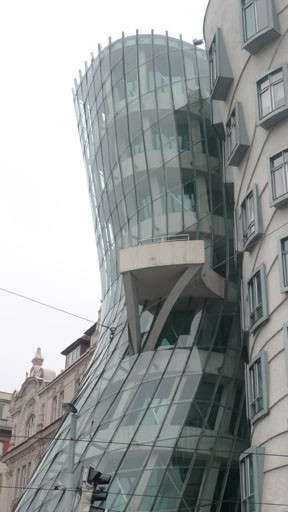 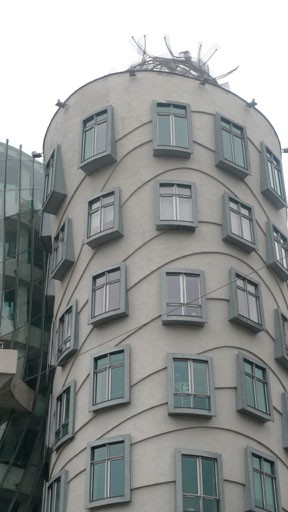 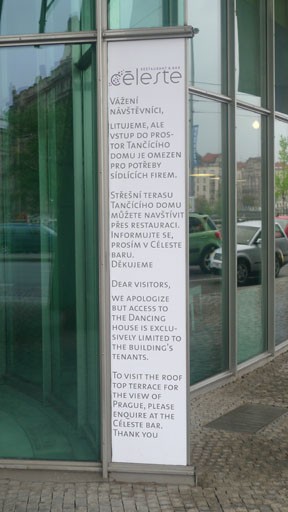 Prague is a city known for its magnificent Gothic, Neo-Baroque, Neo-Gothic and Art Nouveau buildings. In harsh contrast, in Prague's outskirts, there are examples of Soviet inspired, Stalin era no frills and little style industrial and apartment structures. To strategically make a visual statement in strong opposition to Eastern Bloc aesthetics, soon after the fall of communism, a Dutch investment company began to plan and develop what was to become The Dancing House.

The Dancing House is the common name for the Nationale-Nederlanden Building in downtown Prague. Also referred to as The Fred and Ginger Building as it vaguely resembles the 1930's Hollywood dancers Fred Astair and Ginger Rodgers, the whimsical structure was designed by Canadian-American Frank Gehry in cooperation with Czech architect Vlado Milunic in 1992.
This was a few short years after the fall of Communism in Eastern Europe. At the time, it demonstrated an embracing of contemporary and significantly American global culture. The structure was built on a vacant lot overlooking the river that once housed a building that had been destroyed by late WWII bombings of Prague. It was planned to incorporate a cultural center.
This building was very controversial at its inception. Not only did it standout stylistically, but it was asymmetrical. and to many, it was glaringly out of character to its more traditional setting. By those in opposition, it was often referred to publicaly as The Drunk House. In private, one can imagine what it was called. Critics claimed that the building fought with its environment and demonstrated disdain for its context.
Even after over a decade, there are many who still hate the building. Others championed it as a statement of liberation, freedom and democratic beliefs. Here was architecture as politics.For decades, Czech President Vaclav Havel lived next to the site. He favored it and desired that it become an inspirational cultural center for the new age emerging.
Today, there is a French restaurant on the top floor with wonderful views of Prague. The tenants include several multinational firms. However, disappointingly to many, the plans for a cultural center were never realized. Best laid plans, etc.
The design tools and techniques used on this building were the test runs for the processes used on all of Gehry's future projects including the Guggenheim Museum in Bilbao as well as others. The use of curves on the building mimic the aerodynamic shape of airplanes and and sports cars; the software that his firm has refined was previously used to design French jet aircraft.
Though Gehry's buildings often appear to have a random quality, there is a method or intrinsic logic to everything he does. Each of his structures in the last 25 years or so include radically sculptured organic shapes that have pronounced visual gestures and forms. There is a figurative quality to this building. The sweeping curvy female figure attached to the male straight one that composes the two sections of the building.
Other buildings like his Guggenhiem Museum in Bilboa references scales and fish shapes. Fenestration or window design in this building can be seen reused in the Stada Center at MIT in Cambridge, MA. Gehry recycles architectural elements and design pieces. His architectural style is strongly stated in all of his works. His best works, like the Dancing Building in Prague, always surprise and often confound viewers in compelling ways. However, many react negatively to his designs as the architectural results can seem  unworldly and out of balance. Gehry pushes the envelope and even tears it open.
Gehry also uses maleable and unexpected materials that often shimmer, reflect and even sparkle such as corrugated as well as stainless steel, polished aluminum, chain link fencing and wood along with various transparencies and tints of glass. The Guggenhiem Museum in Bilboa, Spain, The Walt Disney Concert Hall in downtown Los Angeles and the MARTa Museum in Hereford, Germany are strong examples of this interesting and often provocative use of materials.
His first major project to be recognized was his own residence in Santa Monica, CA. With this unconventionally facaded conventional house, Gehry was able to demonstrate a unique sensibility and personal architectural vision. For the first time, he demonstrated the asymmetry of his future structures carefully crafted using wood, chain link and corrugated steel to transform a rather ordinary structure into a personal and unique architectural statement. He went from being a paper architect with only drawings of his concepts and visions to a physically realized architect.
Though there can be a certain rawness to his buildings with his use of seemingly found materials, Gehry is a highly sophisticated designer. He is knowledgeable about European art history as well as contemporary painting and sculpture. It should be noted that Gehry's first recognizable design success was with the creation of a series of cardboard sculptural furniture which are now prized by serious collectors. Gehry also applies state of the art computer aided three dimensional design software to assist in illustrating and explaining his design concepts to contractors and building trades.
Critics of Gehry complain that he is a one-trick pony. In other words, his buildings seem to copy each other. This is a strange critique of a highly stylized architect. Didn't Frank Lloyd Wright's architecture have a clearly Wright quality? And H.H. Richardson's? Even Santiago Calatrava's? Secondly, he has been criticized for creating functionless forms that waste resources.
Gothic and Baroque and even classical architecture were never purely functional. Modernism attempted architecture as large undecorated boxes, but that was also criticized. Thirdly, his structures overwhelm their intended use for museums and arenas. This building is just making a strong architectural statement. Gehry has always been interested in architecture as sculpture.
There are very few modern or contemporary buildings in central city Prague. Those that do exist often seem disharmonious to their surroundings. Unexpectedly, this particular Prague building reflects and actually underscores its neighborhood setting. Gehry must have spent time studying the surrounding large and quite beautiful 19th Century structures. His building makes a distinct even radical statement, but oddly pays homage visually to the broad streetscape. Here, architectural imagination has met urban design historical context. Building as sculptural form, the Dancing House is one of Gehry's most aesthetically resolved structures.
Back to Architecture Section Home