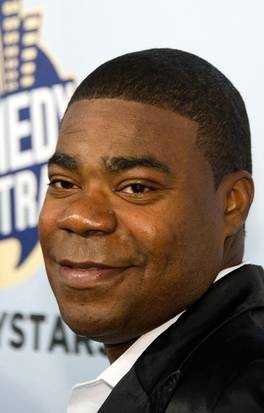 Comedian Tracy Morgan appears to be recovering from a trucking accident that took the life of a fellow passenger.

Initially in critical condition when a truck rear ended his limo comedian Tracy Morgan appears to be recovering subsequent to surgeries.

Morgan, the former “Saturday Night Live” and “30 Rock” cast member, was returning from a standup comedy show in Delaware when his Mercedes limo bus carrying seven people overturned on the New Jersey Turnpike near Cranbury Township at about 1 a.m.

James McNair, 62, of Peekskill, New York, a passenger in the limo bus who performed as Jimmy Mack, died at the scene. Morgan, 45, and Jeffrey Millea, 36, of Shelton, Connecticut, were flown from the accident scene to Robert Wood Johnson Hospital, where they were reported in critical condition.

A driver for Walmart 35-year-old Kevin Roper has been charged with death by auto in connection to the crash, as well as four counts of assault by auto. Apparently he failed to notice slow traffic ahead and swerved at the last minute in a vain attempt to avoid a crash. His truck smashed into the back of the limo, prompting a chain-reaction crash with a second tractor-trailer, an SUV and two cars.

While this accident involving a celebrity has attracted extensive media attention it is a far too common occurrence involving exhausted professional drivers. It was later reported that Roper, typically, had been without sleep for 24 hours.

There are some 35,000 trucking accidents annually with approximately ten percent resulting in fatalities. In the poorly regulated transportation industry, including cab and truck drivers, it is common to put in exhausting and sleep inducing shifts in order to make a living.

During a recent month on the road, particularly in the Mid West, it was all too apparent that truckers rule America’s highways.

The safest strategy is to accelerate well ahead of a truck caravan or lag behind. It can be nightmarish to be boxed in and having to keep pace.

We were coming out of Arkansas in steady rain with poor visibility and hazardous conditions. When trucks pass you can be momentarily blinded by the backlash.

Astrid was busy navigating with a cell phone and GPS when I caught a truck closing in through the rear view mirror. Hitting the accelerator and having room to move we bolted ahead and avoided what would likely have been a fatality. Ours.

Alerting her we watched as the truck seconds later swerved off the road onto the shoulder. Then just as quickly jerked back onto the highway.

“He was sound asleep” she said.

We moved ahead keeping a safe distance and watching as the trucker headed off at the next exit.

Hopefully to take a nap.

Earlier that morning we endured an hour and a half, bumper-to-bumper delay past an overturned truck.

When truckers loose time they have to make it up by pushing to keep on schedule. That combined with fatigue can make it really hairy.

Until there is adequate legislation and regulation we are all at risk on America’s highways. Is there some way to log and track the hours of drivers? That has already been initiated for the airline industry.

One suggestion is not just to charge the driver but, if found guilty of accident through fatigue or negligence, hit the owners of the trucks with hefty fines.

Walmart President Bill Simon issued a statement that in the Morgan accident “Walmart will take full responsibility” if authorities determine that the company’s truck caused the accident.

That will only happen if charges and fines impact the bottom line.

While Walmart keeps prices down yet another aspect of the business plan of a pariah corporation appears to be driving truckers like Roper into the ground.

On any given day an avoidable accident like Morgan’s can happen to any one of us.