A Lesson from Aloes by Athol Fugard 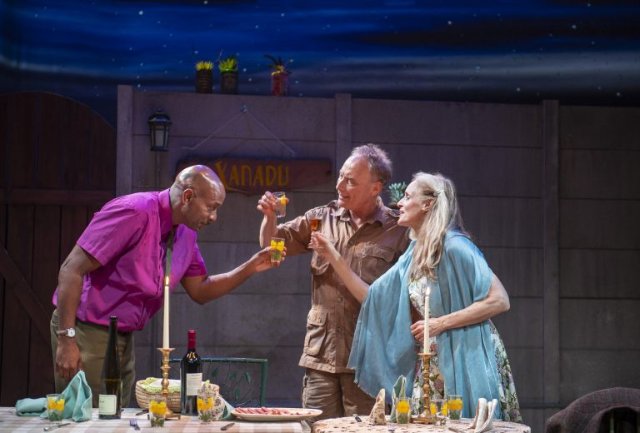 The impetus for societies to overcome evil often relies on the courage of a small number of committed individuals willing to risk all to overthrow tyranny. Among many movements, the Underground Railroad began the march to the freedom of slaves in the United States, and the French resistance frustrated the Nazi’s control of France in World War II. Likewise, in South Africa, many were martyred in the cause to end apartheid.

With any guerrilla action, the dispossessed face disconcerting odds against the established government. Yet frequently, the devastation that these freedom fighters face is less from the entrenched than from within their own ranks. Invariably, the powerful use their overwhelming resources to infiltrate the threat to their dominance. Often, one informant is sufficient to obliterate the cadre of a whole cell of resistance. But in the case of the Afrikaners (Dutch descendents) who ran the South African police force during apartheid, they realized that avoiding lethal force against an exposed cell could trigger more anxiety, distrust, and disarray among its members than an execution.

Betrayal through informing is at the core of Athol Fugard’s masterful A Lesson from Aloes, one of several penetrating plays that earns the South African playwright a position in the pantheon of modern authors. First produced in 1980, the play is set in 1963, a full three decades before the end of apartheid. Weathervane Productions renders this classic with exceptional skill.

With only two actors in the first act and a third in the second act, the narrative is limited to a series of mostly dyadic conversations – sometimes prosaic, sometimes profound. But the pace, the complexly layered personalities, and the dangling clues yield a dramatic mystery of great intrigue and finesse. The searing impact of the disheartening chronicle is fully realized through superb direction and acting.

Piet, the rare Afrikaner with British sensibilities and the courage to fight on behalf of the black population, is depicted with total authenticity by Victor Talmadge. He embodies Piet’s superficial breezy optimism and his darker apprehensions with absolute conviction. He has been socially isolated for many months and has become obsessed with finding, identifying, and growing aloes. This family of succulents is native to South Africa, and paralleling the character’s own resilience and self-identification, aloes survive hostile conditions and drought. And parallel to the needs of a society in conflict, aloes are also healing.

Sympathetic to the cause, but mostly apolitical, Piet’s British South African wife, Gladys became an unwilling victim of the struggle as a result of a police raid. Wendy vanden Heuvel deftly captures the violation that Gladys has suffered with her perpetual fidgeting anxiety and pessimism. Unlike Piet, who is bound to the land of his birth, the eyes of vanden Heuvel’s Gladys wander painfully to the horizon, believing that England would offer the better life.

Adrian Roberts is Steve, Piet’s godson and comrade, who comes to dinner after a long period without contact. Roberts is engaging at the raucous reunion when the closeness of the two men is revealed as they chant spirited ditties and break open the wine. He equally convinces as the conversation turns to more consequential matters and the plot moves toward revelation.

Director Timothy Near orchestrates an outstanding production. Her touch is felt by the strength of the actors’ interactions that enhance their individual performances. Another star of the show is Deb O’s stunningly appropriate set dominated by an earthen-covered courtyard scattered with an array of aloe plants and weeds growing on the edges.

Although A Lesson From Aloes is a domestic drama, its moral reflects the societal devastation that arises in police state environments. Like many other theatrical works from other eras, it is hard to ignore the threads common to conditions in our own place and time. Regrettably, racial politics continue to stunt racial harmony and continue to disadvantage the disadvantaged.

A Lesson from Aloes by Athol Fugard is presented by Weathervane Productions and plays at Z Below at 450 Florida St., San Francisco, CA through June 29, 2018.