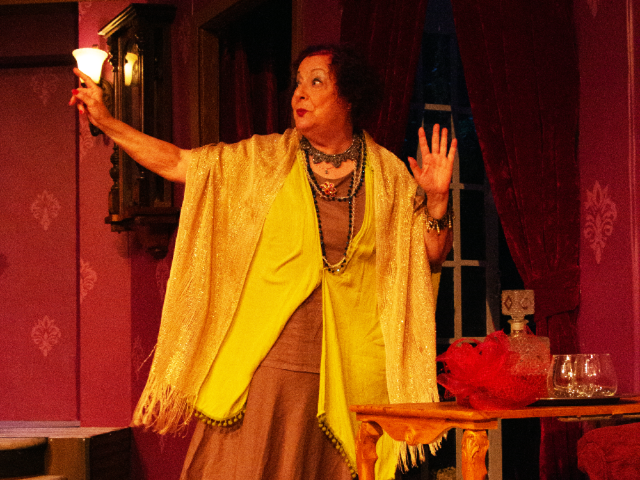 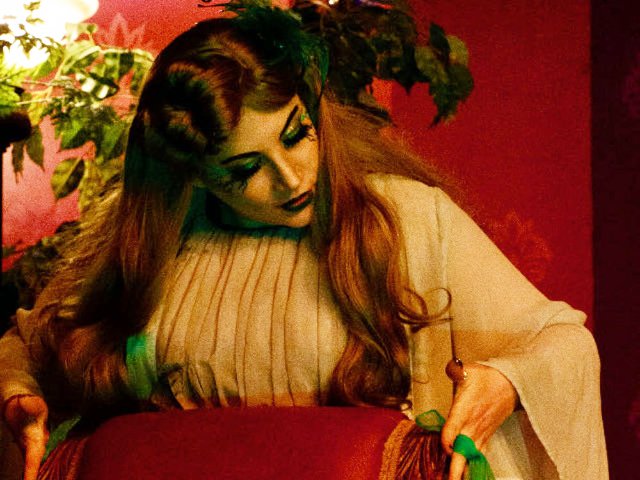 What could be more fun for a summer theater outing than a frothy bit of Noel Coward?  The English playwright is known for his wit and flamboyance and his script of Blithe Spirit offers all of these and more. Eclectic Full Contact Theatre brings one of Coward’s funniest scripts to life, directed by Michael Woods, at the Skokie Theatre. The play is set in about 1940 in Kent, outside London.

Ghosts? Seances? Trances? A hint of a poltergeist? Socialite novelist Charles Condomine (Andrew Pond) and his wife Ruth (Maiko Terazawa) invite friends for an evening of mysticism so that Charles can gather material for a new detective novel. The medium, Madame Arcati, is a classic female comic role, and Jan Slavin does justice to the part, which begins as she arrives on her bicycle for the elegant dinner. The  Condomines and their guests, Dr. and Mrs. Bradman (Christopher John Grella and Lisa McConnell) regard the process with more than a little skepticism.

After cocktails, wine and after-dinner drinks, the party gathers around a table in the drawing room for the seance. With the help of invisible Daphne, her control (“rising 7 when she died in 1884”), Madame Arcati reaches for the unseen. “One rap for yes, two raps for no. Now then, is there anyone there?” Madame Arcati falls on the floor in a trance, but nothing seems to happen, although when she wakes, she swears something has gone on in the drawing room. Perhaps an apparition, or an ectoplasm?

Soon enough, a spirit arrives. Elvira, Charles’ first wife who died seven years ago, is visibly ghostly (played by Jessica Lauren Fisher) but her presence is caustic—and only Charles can see and hear her. Madame Arcati is ecstatic (success!), Charles is bewildered and then flattered, and Ruth is furious. Charles decides that the three of them can enjoy being together but neither wife seems to agree. Ruth tries to get Madame Arcati to send Elvira back where she came from but the medium explains there’s no process for that.

The cast is led with fine performances from Pond and Terazawa as the Condomines and Slavin as Madame Arcati. Kaeley Osterman is delightful as the maid Edith, who doesn‘t understand the instruction to slow down. Director Woods sometimes lets the humor veer close to slapstick and the actors’ English accents are erratic. Pacing was a bit slow in the second act and the running time was unduly long, especially for a comedy.

The Condomines’ posh drawing room, designed by Amanda Grissom, is resplendent in burgundies and purples. Lighting is by Mike Wagner and sound by Laurel Barrett. Emily Bloomer designed the costumes, highlighted by the female performers’ dinner gowns and Madame Arcati’s garb.

Blithe Spirit, one of Coward’s 50-plus plays, premiered in London in 1941 and played nearly 2,000 performances; it opened on Broadway later that year and ran for 657 performances. Blithe Spirit has been made into films and revived frequently on stage. The 1945 film, directed by David Lean and starring Rex Harrison as Charles and Margaret Rutherford as Madame Arcati, is worth seeking out. The expanded film setting gives us a view of Rutherford biking through town on her way to dinner with the Condomines.

Blithe Spirit is personal for me; it was my first involvement in live theater, when I joined the Cortez, Colorado, community theater many decades ago. I worked on the set, sold tickets and made new friends who were interested in the arts in that oil-boom town. Later I directed (William Inge’s Picnic) and acted (in Arthur Miller’s All My Sons and a western melodrama, Deadwood Dick, or the Game of Gold). As a child and teen in Chicago, I had often gone to the theater with my Aunt Belle and also attended theater as a student at UIC. But Blithe Spirit was the first time I experienced the stage. And I still can repeat many of the lines.

Blithe Spirit by Eclectic Full Contact Theatre continues through June 26 at the comfortable Skokie Theatre, 7924 N. Lincoln Ave., in Skokie. Running time is almost three hours, with one intermission. Tickets are $38 with discounts for students and seniors. Proof of vaccination is required and masks must be worn over nose and mouth while you are in the theater building.

For more information on this and other productions, see www.theatreinchicago.com.