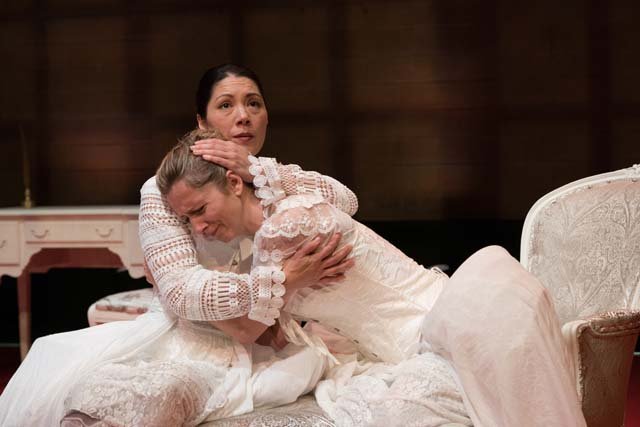 Sometime it’s difficult to assign a genre to a play.  Is it a drama or is it a comedy or is it a little of both?  Often it depends on the skill of the playwright and actors or the mood and sensibilities of the audience,   as to whether everyone “gets it”.

I can’t speak for everyone in the audience on opening night, but I’m viewing the production through the lens that I am watching a comedy, achingly spiced with elements of drama and truth that is creatively woven into the on-stage feminist situations and dialogue of playwright Kit Steinkellner’s daring and scandalous, for-its-day-play, “Ladies”, now on stage at Boston Court Theatre in Pasadena.

Despite the success of the #Me Too movement of the 21st century, it’s taken centuries just to get us to a point where “partnership” is beginning to take on real meaning.  It behooves men to pay attention. The Divine Right of Kings, era is over.

The story is based on The Blue Stocking Society of 1750 London.  It was a society of creative, sophisticated, and educated women; women who came together to discuss literature, philosophy, and art in their London homes. They sought to bring the conversations and opinions of the day that were happening in the men’s private clubs and coffee houses into the parlor room where women could participate as well.

Ms. Steinkellner’s play has just four female actors ‘standing in’ as surrogates for the 1750s society of women.  They also double as men when required.  In addition to the action taking place in London, the ladies also break the fourth wall (normally a no-no) to give their characters’ various takes of how the 21st-century society views the mores of the Victorian era and comparing them to today’s free spirited antics.

The comments on both society segments are laced (no pun intended) with plenty of adult language; tons of F-bombs are hurled from the stage along with simulated graphic sexual activity on it.  Sensuality, literally drips from every character encounter ranging from full frontal nudity to pedestrian gossip, so leave grandma and the kiddies at home.

Boston Court Theatre’s mission statement of dedication to create and present works that are innovative, diverse, vital and adventurous in an intimate setting has certainly been realized in their last production, the potent and impressive “The Judas Kiss” by David Hare, directed by Michael Michetti, and now with the Steinkellner-Kubzansky collaboration on “LADIES”.

Boldly and deftly directed by Boston Court’s co-artistic director Jessica Kubzansky, “Ladies” stars the sharp and smartly executed ensemble talents of: Meghan Andrews as Elizabeth Montagu and Carrie Kawa as Elizabeth Carter, the titular heads of the Society, along with Jully Lee as Fanny Burney, a published novelist, and Tracey A. Leigh as Angelica Kauffman, a portrait painter who find herself being sexually drawn toward Mrs. Burney.  Their relationship is slow and tender to develop but eventually is consummated.

Contrary to what men may think when it comes to romantic love gambits, women are wired like electric heating blankets; measured in their ardor. Men however, are like the electric light switch, ready when the light flips on.  These observations and ponderings by and large are very entertaining on the bright side of “LADIES”.

On the not so bright side is the communication component of this otherwise creative and inventive production.  If these highly skilled actors are to be appreciated for their obvious talent then this audience of one needs to understand what they’re saying to one another in their scenes; especially in their monologues to the audience.

Funny observations, ruminations and/or drama, as well as comedy performances in the hands of stand-up comedians, are orchestrated for maximum impact.  So also should be all of the spoken art forms. Too many of today’s performers “gabble” their way through performance at warp speed without stopping to breathe.  Too much watching of talking heads on TV talk shows? Perhaps.   Language is the currency of the theatre.  Love it. Honor It. It’s too important to ditz it or slough it off.  But, I digress.

Composer and Sound Designer Nihan Yesil creates the sound; Courtney Lynn Dusenberry, is the Properties Designer; Angelina Del Balzo is the Dramaturg, Nike Doukas, is the production’s Dialogue Coach who also coached the splendid “The Judas Kiss” performers, and Julia Flores is the Casting Director, who also cast the Pasadena Playhouse winning production of “Real Women Have Curves” a couple of seasons back.  Trixie Eunhae Hong stage manages the production.

“LADIES”, is a world premiere production currently on stage at Boston Court Theatre, in Pasadena that runs through June 30.