Michelangelo at the Museum of Fine Arts

Drawings from Casa Buonarroti to June 30 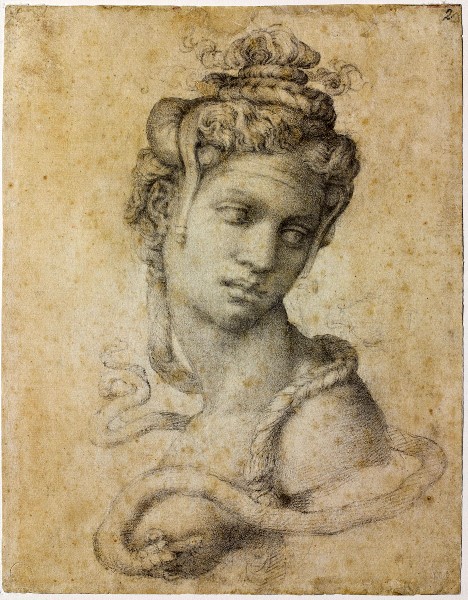 Cleopatra (front) about 1532â€“1533 Black chalk *Florence, Casa Buonarroti, inv. 2 F All images Organized by the Muscarelle Museum of Art at The College of William & Mary in Virginia and Courtesy, Museum of Fine Arts, Boston. 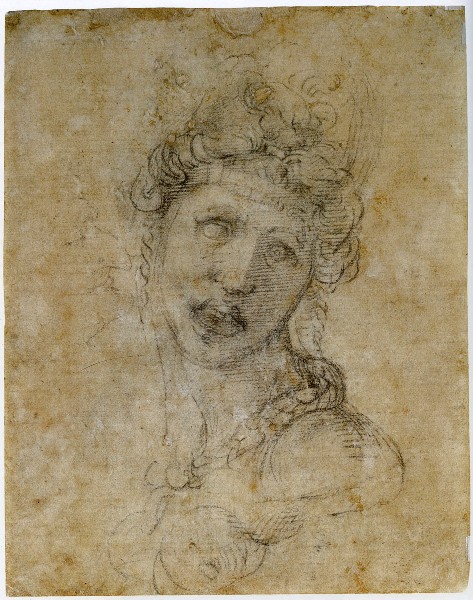 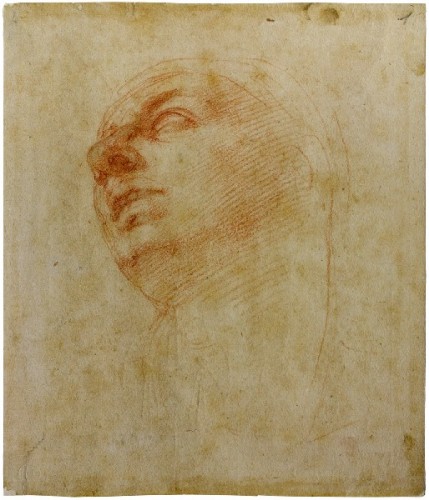 Study for the Head of the Madonna for the ’Doni Tondo’ about 1506 Pen and ink *Florence, Casa Buonarroti, inv. 1 F 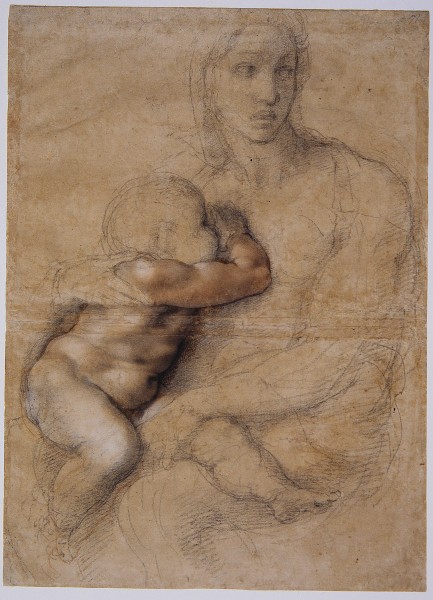 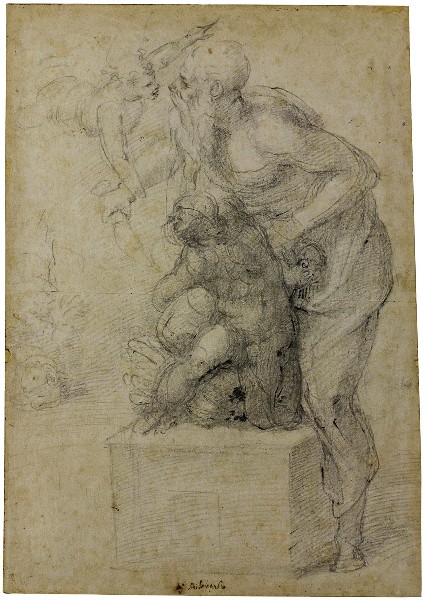 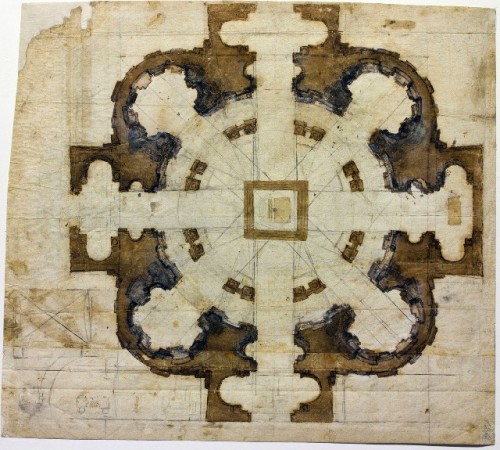 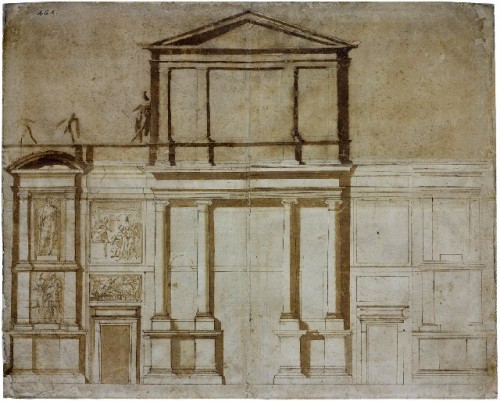 Project for the FaÃ§ade of San Lorenzo in Florence 1516 Black chalk, pen and ink with brown wash *Florence, Casa Buonarroti, inv. 45 A 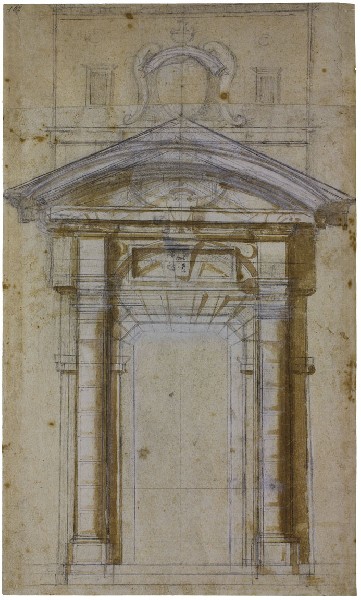 Study for the Porta Pia in Rome about 1561 Black chalk, pen and ink with brown wash, white heightening *Florence, Casa Buonarroti, inv. 102 A 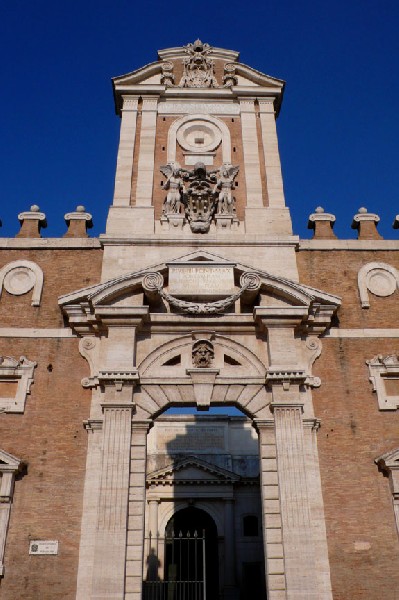 The Museum of Fine Arts, Boston is exhibiting 25 drawings by Michelangelo Buonarroti (1475 to 1564) through June 30. They are loaned by Casa Buonarroti, the former home of the artist in Florence, which has the most extensive collection of his drawings, architectural studies, letters, poems and memoirs.

Earlier this year we viewed a single sculpture by the Italian Renaissance master at the National Gallery.

There is very little of the artist’s work in American collections. Having two exhibitions in a single season is exceedingly rare. The last major American display of his drawings was mounted by the National Gallery in 1988.

While this was my first encounter with these drawings many were familiar from publications particularly the 14 sketches and plans for architecture combing fantasy designs for fortifications, as well as studies for the Porta Pia, stairs of the Laurentian Library, and  the façade for the Medici family’s Basilica of San Lorenzo which was deemed too expensive and never built. The façade to this day has a rough, unfinished exterior.

The studies for architecture provide spectacular glimpses into that aspect of his genius. But the majority of visitors to this small scale but compelling exhibition will be most satisfied with the selection of 11 figure studies which range from sketches for paintings to the precisely finished masterpiece “Cleopatra.” It is being shown on a pedestal to reveal recto and verso drawings.

By far the “Cleopatra” drawing, a gift to his beloved, Tommaso de’ Cavalieri, is the greatest treasure in this selection. He owned it for some 30 years before being pressured to relinquish it to the Duke of Florence, Cosimo I de’ Medici. The master drawing was later returned to the artist’s heirs along with other works acquired by the duke in an inappropriate manner.

Because of their fragile nature, even in Florence, the drawings are rarely shown for extended periods of time.

For me the architectural studies were particularly exciting to view. I was fortunate to attend both undergraduate and graduate seminars on Michelangelo. In both cases we read deeply into the literature.

Later, during a Suffolk University tour of Florence, I advised a student on a directed study of his remarkable, mannerist design for the staircase of the Laurentian Library. Prior to travel we read and discussed the classic James Ackerman two volume study. Then, on site, we explored the many intriguing enigmas on this architectural masterpiece.

It is fascinating to consider that a master of the stature of Michelangelo served at the whim of his patrons. This resulted in unwelcome tasks (The Ceiling of the Sistine Chapel for Julius II) and enormous efforts for unfinished projects (The Tomb of Julius II and the façade of San Lorenzo).

When the Medici pope Leo X (1475-1521) came to power he ordered the artist to abandon work on the epic Tomb for Julius II and return to Florence to create tombs for his family (Giuliano and Lorenzo) in the Medici Chapel of San Lorenzo.

To provide marble for the Julius II tomb Michelangelo oversaw the construction of a road to Carrara and spent an extended period of time entirely devoted to the quarry. Only sketches of blocks of stone signify that phase of his work. The marble which was shipped to Rome was confiscated for the construction of St. Peter’s Basilica.

Of the Slaves for the tomb two finished ones are in the Louvre while the unfinished, life-size works line a corridor of the Accademia in Florence.

Michelangelo considered himself to be primarily a sculptor. But even if he never carved marble he would be known today as one of the greatest painters of the Renaissance. As well as a major architect. He designed the dome of St. Peters for which he supervised the construction of a model. It was built after his death. Given its enormous scale and complex engineering the dome is a masterpiece of Renaissance architecture.

If Julius II forced the artist to paint frescoes in the Sistine Chapel authentic paintings which predate that project are exceedingly rare. "The Doni Tondo" or "The Holy Family" (1506-1508, The National Gallery, London) painted when he was in his early thirties is now firmly attributed to the artist. This exhibition includes a study for the head of the Madonna with its signature upward projection. Its unique design made it readily familiar.

Even though a small selection, this exhibition offers the range of his approaches from drawing as a sketch and part of the thinking process, as well as finished works complete in themselves, or cartoons for paintings.

"The Sacrifice of Isaac" suggests a sketch for sculpture but study of the artist’s work suggests that he didn’t work out his three dimensional pieces through drawings. The poetry reveals his neo platonic technique of discovering and revealing the figure liberated from a block of stone. No other sculptor of his time is known to have worked in this manner.

We are grateful to the MFA for this unique opportunity to view the drawings and conceptual process of one of the greatest Renaissance artists.