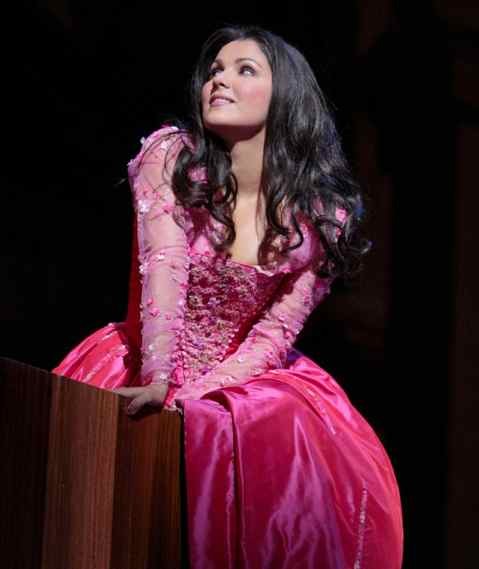 Anna Netrebko as Juliet. Irresistible. All images courtesy of the Metropolitan Opera. 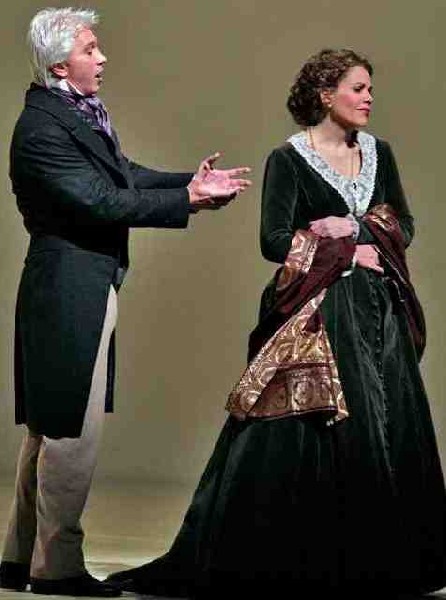 Renee Fleming and Dimitri Hvorostovsky do not get together in Eugene Onegin, but at what a price. 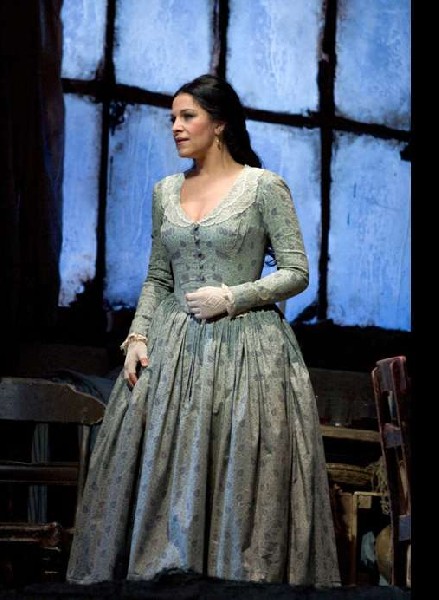 Angela Gheorghiu sings Mimi is this touching rendition of the classic La Boheme. Ramon Vargas who sings three octaves evenly and beautifully is her lover Rudolfo. 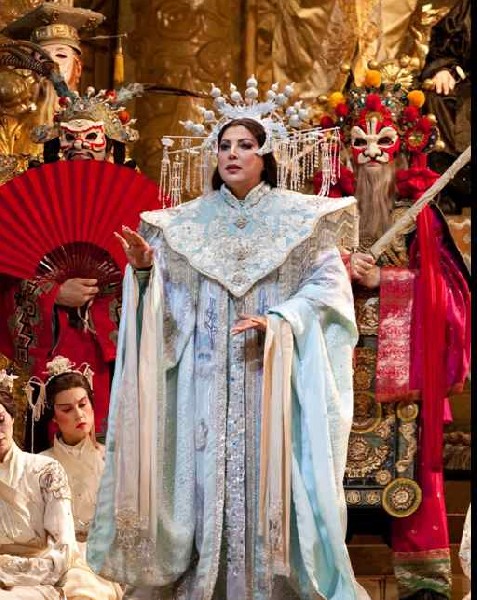 Turandot puts the grand in grand opera and the spectacle is enhanced by wonderful singing, particularly Maria Guleghina in the title role.

Aida in the tradition of grand opera with horse-drawn chariots, triumphal marches and whatever else you can imagine and more.


Set in ancient Egypt, this Verdi classic is both a heartbreaking love story and an epic drama full of spectacular crowd scenes. A cast of powerful voices and a grand production bring the story to life on the Met stage (and on the HD screen). Violeta Urmana stars in the title role of the enslaved Ethiopian princess, with Dolora Zajick as her rival. Johan Botha plays Radamès, commander of the Egyptian army, and Daniele Gatti conducts. Among the score’s highlights is the celebrated Triumphal March.

We saw the live production in October:

Powerful voices are in the cast.  Violeta Urmana stars in the title role.  In the lower register, Urmana's rich voice reveals its origin as a mezzo.  Although there was a bit of strain at the top, the overall impression was of lustrous beauty..

Dolora Zajick's Amneris was gripping.  Her  range and power have made this dramatic mezzo-soprano the go-to performer for the role for over two decades.  Zajick is often rightfully called a force of nature.  As Radames, the burly South African tenor Johan Botha was intense and elegant.

Daniele Gatti conducted, creating beautiful context as he induced luscious soft passages soaring to what Verdi called "a whiff of the Marseillaise", the patriotic anthem, which ends the Introduction and Act II.  When Aida was composed, the role of conductor was changing.  Earlier, the composer would conduct the first three performances of the work and then step aside for a nameless person to continue, copying the composer's intentions.

Gounod’s ultra-sensual interpretation of Shakespeare is an ideal vehicle for star soprano Anna Netrebko and the remarkable tenor Roberto Alagna, both of whom bring their incandescent appeal to the title roles. The irresistible Nathan Gunn is Mercutio and Plácido Domingo presides on the podium.

We saw the Romeo and Juliet HD at a summer festival sponsored by the Met.

Eye candy helps in the HD form where all performers are close to us. Anna Netrebko is incredibly beautiful, an excellent actress, and saucy. Playing Juliet in Charles Gounod's "Romeo and Juliet," she and her Romeo (Roberto Alagna) giggled their way through marriage vows sung by the Friar. One of my frequent neighbors in the rafters at the Met claimed that her binoculars were strong enough to pick up this detail.   Mine are not, and I enjoyed sharing the moment.  The director must have agreed, because he also included Netrebko exiting toward the camera making a funny face.

Tchaikovsky’s setting of Pushkin’s masterpiece is one of the most romantic and lyrical works ever written for the stage. Valery Gergiev conducts, and Renée Fleming and Dmitri Hvorostovsky star in this moving tale of mistimed love.

A magnificent cast comes together for Franco Zeffirelli’s iconic production of the Puccini favorite. The exciting young conductor Nicola Luisotti presides over a glorious vocal ensemble led by Angela Gheorghiu, opposite tenor Ramón Vargas as her lover, Rodolfo.

Director Franco Zeffirelli’s breathtaking production of Puccini’s last opera is a favorite of the Met repertoire. Maria Guleghina plays the ruthless Chinese princess of the title, whose hatred of men is so strong that she has all suitors who can’t solve her riddles beheaded. Marcello Giordani sings Calàf, the unknown prince who eventually wins her love and whose solos include the famous “Nessun dorma.”

About the Turandot production at the Met, we wrote:

In many ways Turandot is the most exotic and sumptuous of the works by Puccini. He experimented with new musical forms to evoke the exotic ambiance of the Asian themed libretto. It tells the tale of a princess whose mother was abused and murdered leading Turandot to despise men.

To ward off suitors they must solve her three riddles. Failing to come up with the correct answers results in the death penalty the following dawn. In the first act, as Calaf (Marcello Giordani), observes and falls in love with her, a suitor is about to be beheaded. There are poles sticking up with heads of other contenders. That year there were more than a dozen suitors who lost their heads over Turandot. Everyone warns Calaf against taking on such a grim challenge.

We wrote about this HD, shown at a summer fststival sponsored by the Met:

How unlikely it seems today that Madama Butterfly would have been greeted by cat calls at its premier while Peter Grimes, the less accessible opera, was greeted with silence and then 14 ecstatic curtain calls. Puccini had been running behind on the composition and it would take three months of performances in many Italian opera houses to mold the opera into the version we love so today.

Anthony Minghella first mounted this "Butterfly" in London and it dazzles the eye.  Patricia Racette's performance tugs at the heart from her first tiny steps across stage to meet her husband-to-be.  Her emotional range extends the range of her voice and it is no surprise to see an audience in tears when she is inevitably betrayed.

Having watched and listened to Racette only days before in "Grimes" I was struck by the warmth of her voice and performance.  Her beautifully shaped arias (and duets and trios) all resonate, but the very real humanity she conveys on screen is unusual.  Marcello Giordani as Pinkerton and the rest of the spot on cast make this production of "Butterfly," whose visual effects are stunning, a treat.

In the back of the "Butterfly" stage is a rectangle, colored in an intense red and then brilliant blue.  It contains an horizon over which all the characters enter. The small house Pinkerton has rented for Butterfly (for 999 years, contract cancellable at anytime, just like the marriage) makes us feel how delicate and protected her world is.

One of the most popular operas of all time, Carmen "is about sex, violence, and racism—and its corollary: freedom," says Olivier Award-winning director Richard Eyre about his new production of Bizet's drama. "It is one of the inalienably great works of art. It's sexy, in every sense. And I think it should be shocking." ElÃ„Â«na GaranÃ„Âa sings the seductive gypsy of the title for the first time at the Met, opposite Roberto Alagna as the obsessed Don José. Rising maestro Yannick Nézet-Séguin conducts.

We wrote about the production in the house:

This production's Carmen is hot and juicy. An actress of the first order, Elina Garanca sings beautifully, if sometimes more like a Rossini soprano than a Carmen. She's not quite Emma Calve's heir, -- yet. Surely she has a calm, easy assurance and the calculated, dominating power attributed to Galli-Marie, the first Carmen, who Bizet himself chose. Fortunately Garanca has not suffered a knife-wound like Galli-Marie who was attacked by an overzealous Don Jose in Genoa.

Adjectives like dangerous, impudent, coquettish, sparkling, insouciant and piquant have been attached to the list of premier divas who have undertaken the role. That they can all be seen in Garanca tells you how entrancing her performance is. Over time, her voice may become heavier and more dusky, fulfilling her early promise.

Alagna, for all of his passion, is a devil, and even in a deeply-felt scene with Barbara Fritolli as Micaela, in the first act, he had her laughing and giggling. I'm sure he will be reined in for the HD broadcast. It was fortunate that Carmen has no lines to sing when Alagna smothers her mouth with kisses which appeared to be enthusiastically bestowed as he groped and hugged her. Of course, Carmen asks for it.

As Alagna warmed, his voice opened up. His aria "Le fleur que tu m'avais jeter," was a heartbreaker. He makes a splendid Don Jose.

One of our commentators noted about the HD: “This Met production of Carmen is the best I've ever seen. Not only is the singing first rate, but it is also the acting that steals the show. Was there ever a sexier and more beautiful Carmen than Elina Garanca? Nope!”

If you haven’t tried an HD, go to one this summer.  Or even two or three.  Pleasure guaranteed.