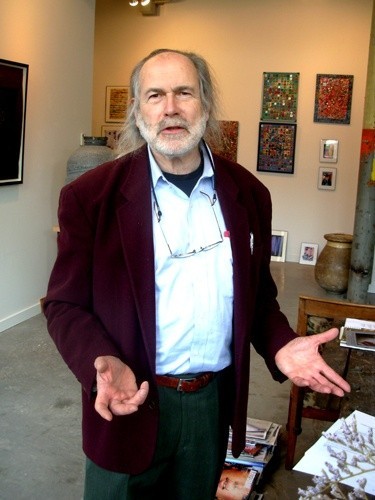 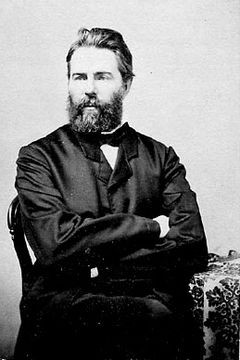 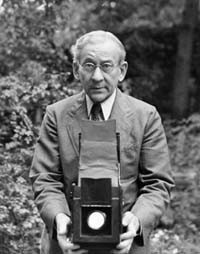 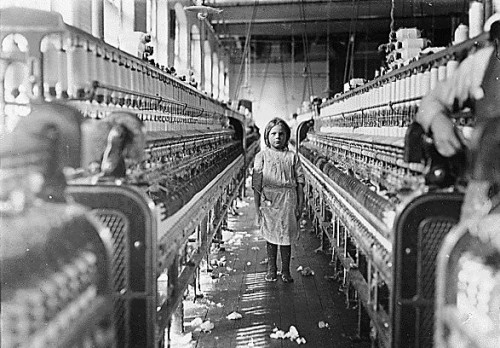 Hine photographed children working in the Eclipse Mill and other factories. 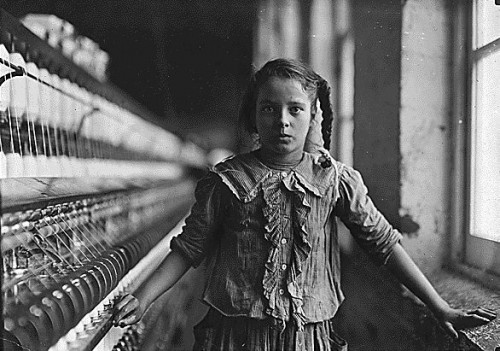 It will be a busy summer for the North Adams based gallerist, Ralph Brill, who operates a gallery in the Eclipse Mill. In addition to his own space he is presenting two summer long exhiitions in the artist run Eclipse Mill Gallery. Both projects grew out of an interest in the rich history of the region and significant anniversaries this year.

It is usual for Brill to have a number of irons in the fire. These entail annual projects at the local, national and international level. Recently we discussed with Brill plans for the busy summer season in the Berkshires.

Charles Giuliano During a recent gathering you touched on the topic of 1861 and the events that happened some 150 years ago.

You mentioned that it was the year that Melville wrote Moby Dick apparently inspired by the humped shape of Berkshire hills which we viewed from his property Arrowhead.

It was also the year of the start of the Civil War and I recall you mentioning events in Europe at that moment as well.

This summer you are organizing exhibitions and events at Arrowhead and the Eclipse Mill Gallery that relate to Melville. And another project for the Eclipse regarding the historic photos by Lewis Hine of child labor in the mills.

In addition to the Brill Gallery in the Eclipse Mill you are using large images attached to some of the windows of the Cariddi Mill between North Adams and Williamstown. You are calling it Brill Gallery Two and it is intended to create an awareness of your gallery in the Eclipse Mill. You have mentioned drive by visibility during the season in the hundreds of thousands.

For the past couple of years you have also had the Hoosac River series of light events and that project continues this year.

So there is a lot going on for you this summer.

Let's start with the Melville project and the thinking process that initiated it. How did it gel into taking a specific form with the artists Arthur Yanoff and Kay Canavino? What kind of negotiation was involved in getting Arrowhead to become a partner?

I guess we might start by saying "Call me Ishmael."

Ralph Brill In 2010 Arthur Yanoff approached me with an idea he and his wife Marcia Stamell had been thinking about - an artistic interpretation of Herman Melville and Monument Mountain in Great Barrington where they live.  My Gallery represents Yanoff.  He wanted to work with a Berkshires based Photographer - might I be able to put together a team?

As it turned out, I was interested in working on this Project.  I liked the idea of examining and creating art around Melville, the Berkshires and the 160th Anniversary of the publication of Moby-Dick.  In many visitors' eyes - they see South County as the Stages Center and North County as the Visual Arts Center.  I liked the idea of bringing some North County Sensibilities to the Project.  I introduced Adams -based Photographer Kay Canavino to Yanoff and there was great chemistry.  Yanoff wanted to work from Field Sketches and Photographs.  Yanoff liked Kay's eye and story telling.  I knew Kay, but had not worked closely with her until this Project.

We spent the first four months experimenting, hiking, meeting with historians, naturalists, geologists, Indian specialists, etc.  During this process we shifted away from a focus on Monument Mountain and decided to tell a larger story in 3 chapters:  (1) HERMAN MELVILLE AND MOBY-DICK AT ARROWHEAD, (2) HERMAN MELVILLE AND NATHANIEL HAWTHORNE, and (3) BERKSHIRE'S COUNTRYSIDE.  (1) will be up at Arrowhead from 18 June through Columbus Day and (2) and (3) will be up at the Eclipse Mill Gallery from 24 June to 24 July 2011.  There will be around 50 Paintings and Photographs combined.  10% of the Sales at Arrowhead will go towards preserving the Melville Legacy at Arrowhead.  We have some beautiful Abstract Paintings and Photographs and visitors will begin to see Whales in the landscape as we did.

As you may know, Melville was influenced very much by Nathaniel Hawthorne's comments while he was writing his "Whale Book" at Arrowhead which became Moby-Dick.  Melville met Hawthorne at a famous picnic on Monument Mountain in 1850.  Moby-Dick is dedicated to Hawthorne.  Moby-Dick did not sell well the way Melville was counting on and he and his family had to move to NYC in 1863 to get a job as Customs Inspector.  Like most artists then as now - it is very difficult to make it by being here full time.  For the visitors, it is a great treat to experience all the region's culture today - but, for the artists today as then, they eventually have to leave for NYC, Boston or LA.

Around 1925 the American Academics began to revisit Melville and Moby-Dick and they were impressed by the story telling and complexity.  So, long after Melville died this novel has become a must read and international best seller and the book continues to impress artists of all types.  Also, there are hundreds of Melville Scholars today specializing in niche aspects of Moby-Dick.  Some of these Scholars make pilgrimages to Arrowhead.  We are planning on interacting with these Scholars and see how REFLECTIONS ON MELVILLE might fit in with their interests.  It is our plan to have this Exhibition travel to various whaling museums and galleries in New England and beyond over the next 3 years.

We invited Betsy Sherman, the Executive Director of Arrowhead to a couple of our early project meetings.  Betsy understood immediately what we were working towards.  She offered us the Arrowhead Barn for the season.

During this process we also brought in Samantha Pinckney who is on the Art History faculty at Eastern Connecticut State University to act as our Curator.  Her Essay will be up on the BRILL GALLERY Website (www.brillgallery109.com).

CG In addition to the Melville project you are curating a second show at the Eclipse Mill Gallery. It is also inspired by Berkshire history, child labor in the mills. You are also working with Berkshire artists. Can you discuss that project? How it came about and the nature of collaboration with the artists.

It seems that a lot of the projects you engage with, such as developing the art of World War Two museum, have historical, social and political concerns.

Can you describe what drives these issue and how they evolve into becoming art based projects. In what way do you work with visual elements to activate and awareness of themes that so often are presented as literature, documents and text? Of course that also begs a critical response that "this is not art." It is something else.

Formalist art criticism has long marginalized the narrative, social and political content in art. On example of that would be the Irving Sanders thesis of "The Triumph of American Art" in which the abstract expressionists emerged, dominated and marginalized the Social Realists who preceded them. Critics have described the turn to abstraction as a part of the Cold War and the anathema of Communism which was the thrust of social realist art.

It is of interest then to see you embracing aspects of what would have formerly been considered as an aspect of the socialist art of the depression years of the 1930s.

Did you have a radical socialist background in your family? Did leftist, liberal politics in the 1960s become an influence on your interests and directions in the art projects you are now involved with?

RB   I have never been about just having Paintings or Photographs for sale.  I am interested in exploring Life and Telling Stories and that's a part of my Art.

Over the past two years several local people finally had the courage to enter the Eclipse Mill and see what is inside.  Some of these people came into the BRILL GALLERY and shared with me their stories of working here or knowing of family members who did.  They typically were very pleased to see the Spaces alive and reused.  On the other hand, visitors from NY, Montreal, etc. tell me how attractive the Mill and my Gallery is, but they have No Idea of what took place in the Eclipse Mill 100+ years ago.  So, I decided to do some research on the history and put together a team of Artists, Musicians, Historians, Teachers, etc. to help tell the Story of What It Was Like To Be An 11-Year Old Child Working In The Eclipse Mill 100 Years Ago.  And thus, about a year ago THE MILL CHILDREN PROJECT was born.

We had several things to work with:

1.  This August is the 100th Anniversary of Lewis Hine's Photographs of the Child Workers outside of the Eclipse Mill.  We got copies from the National Archives.

2.  We interviewed families that had Parents who worked in the Mill.

3.  Joe Manning has done major research for his books on this subject and he is on our Team.

4.  William Oberst is a local Realist Painter and is doing some amazing work.

5.  Dawn Nelson is an Abstract Painter and teaches 11-year olds Art outside Boston.

7.  Matt Hopkins is a local Musician/Composer.  He created the Mermaid Music for my HOOSAC RIVER LIGHTS Event.  He is dealing with the Sounds the Children heard while working in the Cotton Mill here.

8.  If successful, a Visitor to THE MILL CHILDREN Exhibition will get a feeling - Through Art - of what it was like to Work in the Eclipse Mill 100 Years Ago as an 11-year old.

9.  I brought in North Adams Educator Anne French who is using this Material to create Learning Tools for North Adams students and for other Mill Towns.

10. My plan is to have this Exhibition travel to other Mill Towns on the East Coast over the next 3 years.  It looks like Mill Town Lewiston, Maine might be next.