Noises Off is a Silly Play

At The Public in Pittsburgh 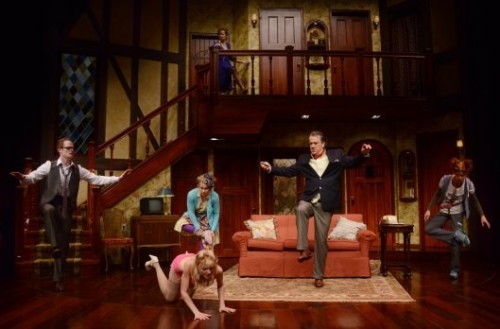 Noises Off (by playwright Michael Frayn, now playing at the Public) is a silly play about a silly play. Or, more accurately: it’s a silly play about the silly things that occur when a group of people tries to put on a silly play. In writing that, I use the word “silly” with its etymological sedimentation in mind: the word comes from the Old English “seely,” which meant happy, blissful, or blessed, and there is something blessed and blissful indeed to be made to laugh in the way a well-made farce can make you laugh, or, in this case, the way a silly farce about a farce can give you opportunity to escape in laughter.

The opening scene of Noises Off depicts the final rehearsal of the world premiere of a (fictional) new play called Nothing On at a regional theater in Weston-Super-Mare, UK. The actors have had only two weeks to rehearse this complicated farce, with its myriad doors and identical boxes and plates of sardines and (this being a British sex farce) nudge-nudge-wink-wink euphemisms for sex and a blond bombshell running around in hot pink lingerie and heels. It’s midnight before opening night, and things are not going swimmingly.

Dotty (Helena Ruoti), the actress who plays Mrs. Clackett, a housemaid, can’t keep her props straight; Frederick (Preston Dyar), the actor who plays the tax-evading homeowner Philip Brent, is in a fragile emotional state, having just been left by his wife; everyone has to keep an eye on Selsdon (Ralph Redpath) to make sure he doesn’t hit the bottle and forget his entrance; Tim (Scott Cote), the tech director and understudy, hasn’t slept in forty eight hours and can’t keep up with all of the technical issues arising onset; and the offstage amours among the company are complicating the onstage business. The director, Lloyd Dallas (Michael MacCauley) is pretty much at the end of his rope, and just wants to get the show opened so he can move on to more prestigious pastures.

The opening act of Noises Off is the setup, giving us a glimpse of what Act One of Nothing On ought to look like if the actors can pull all the tenuous threads together and make the show work. In the second act, we’re backstage, a month later, and the show is on tour. They haven’t pulled the threads together; in fact, the entire enterprise has begun to go off the rails. Garry Lejeune (Noah Plomgren), the actor who plays a real estate agent in the play, and Dottie are having a furious lover’s quarrel because the possessive Garry believes Dottie is cheating on him with Frederick; Lloyd has returned to the tour, not to visit the show but to have a weekend in bed with Brooke (Laura Woyasz), the blond bimbo; Poppy (Karen Baum), the stage manager, thinks Lloyd has returned to spend the weekend with her; and on top of it all Selsdon has access to booze.

Hilarious chaos ensues backstage as the members of the company, led by the busybody Belinda (Garret Long), try to cope with the various acts of sabotage and violence Garry and Dottie inflict on each other and on Frederick and Brooke, all of which have hilarious effects on the action onstage that we can hear and imagine, but not fully see. The third act, two months later, reveals the effects of several weeks of such in-cast infighting, from the audience’s point of view. By this point there is virtually “nothing on” stage anymore at all; the train is fully derailed, and now it is the backstage shenanigans we are left to imagine from their residual tumultuous effects onstage.

As might be guessed from my description, Noises Off is not an easy play to pull off – it requires actors who are good enough to do a farce really well in which they play actors unable to do a farce at all. With the exception of Brooke, who was obviously cast on the couch, none of the actors in the play-within-the-play are particularly bad actors; they just suffer from the lethal combination of being underprepared and overinvolved with each other. A good production of this play (and the Public’s is a good one) takes care to let us see that although the characters they play in Nothing On are types, the actors who play them are real people with real (if ridiculous and overblown) problems and frustrations.

Their charm and appeal comes from having all of the traits that lead us to form stereotypes about actors (and directors, and stage managers) without being stereotypes themselves. What’s also hard about this play is that it requires a great deal of physical comedy and timing on the part of the cast to show how tricky physical comedy and timing are (in the example of missed cues and mislaid props in the play within the play). The cast is miraculously adroit with the door-slamming farce bits, and in particular Plomgren and Woyasz provide moments of brilliant and hilarious physical comedy.

Director Don Stephenson, who has directed this play before, has shaped the overall story with a good eye, so that even though we are essentially seeing the same scene three times, each repetition has its own arc and climax, and its own comic energy.