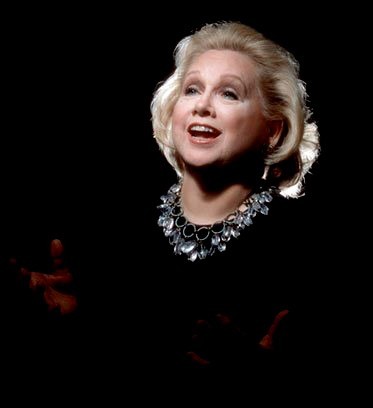 Barbara Cook will perform at the Mahaiwe. 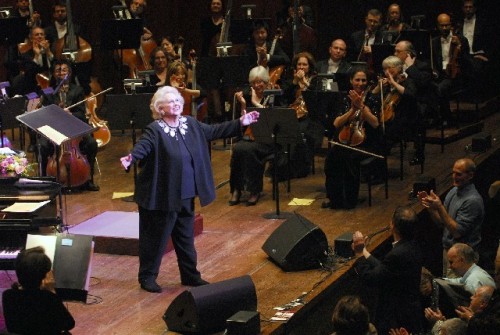 Cook on stage recently with the New York Philharmonic. 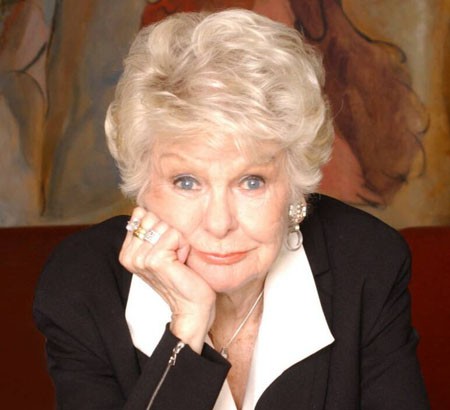 Elaine Stritch has postponed her appearance at the Mahaiwe.

While her fans will be disappointed that Elaine Stritch has postponed a much anticipated appearance at the Mahaiwe Performing Arts Center there is a surprise twist.

It is perhaps just as thrilling that the Mahaiwe will in essence Send in the Clowns. The sublime rendering of that standard was an absolutely highlight  this season of the Broadway musical Sondheim on Sondheim. It was performed by the truly magnificent Barbara Cook. It won her a Tony award for a show that received no other nominations.

A theatre mantra, however, is can you ever get enough Sondheim. Having Cook render that and other Sondheim material just adds to what is becoming a Berkshire Sondheim festival. Both Barrington Stage and Williamstown Theatre Festival are launching the season with his musicals Sweeney Todd and A Funny Thing Happened on the Way to the Forum. Barrington will also stage a youth production of Into the Woods.

A couple of summers ago Cook gave a thrilling performance in Ozawa Hall at Tangelwood. This is a delightful return of one of our greatest artists to the Berkshires.

Now in her 80s Cook moves about the stage with measured steps. But that magnificent voice is a timeless treasure. There is still the velvety, sweet tone. But now enriched with life experience. She makes you feel every word of the lyrics. This is sure to be an absolutel highlight of what is shaping up to be a spectaular Berkshire season.

What follows is the Mahaiwe press release.

Mahaiwe Performing Arts Center announces that Tony Award-winning Broadway musical theater legend Barbara Cook will grace the Mahaiwe stage on Sunday, August 15 at 7pm. The equally legendary Elaine Stritch, who was previously scheduled to perform that evening, has postponed her Great Barrington concert to a date to be determined due to being cast in the Broadway revival of A Little Night Music.  Patrons who have already purchased Elaine Stritch tickets may call the Box Office to either use those tickets to see Barbara Cook or to request a refund. Tickets are $52 to $87 and go on sale to Mahaiwe Members on Friday, June 18 and to the general public online starting Sunday, June 20. Tickets are available online at www.mahaiwe.org or by phone at the Mahaiwe Box Office: 413.528.0100.

"We at the Mahaiwe are thrilled to host so many Broadway stars this season," said Mahaiwe Executive Director Beryl Jolly. "Between Barbara Cook and Patti LuPone and the Broadway-bound play Lombardi starring Dan Lauria and Judith Light in July, we are in for some world-class entertainment."

Barbara Cook's silvery soprano voice, purity of tone, and warm presence have delighted audiences around the world for more than 50 years. The recipient of a Tony, a Grammy, a Drama Desk Award, and an inductee of the Broadway Hall of Fame, she was considered "Broadway's favorite ingénue" during the heyday of the Broadway musical. Ms. Cook is a consummate solo performer, appearing everywhere from Royal Albert Hall to the Sydney Opera House and on such records as the definitive performance of Stephen Sondheim's Follies and the original cast recording of Candide. She continues to thrive, most recently with a triumphant return to Broadway in 2010 with the premiere of Sondheim on Sondheim, a new musical that delves into the life of the famous composer through his own works. For this role, she was nominated for another Tony-Best Featured Actress in a Musical.

Join Friends of the Mahaiwe and receive special discounts and benefits that are now available online. Membership begins at $65 and all Friends receive priority ordering for first access to the best seats and discounts on tickets to most Mahaiwe Presents events throughout the year. The Mahaiwe Box Office is located at 14 Castle Street in Great Barrington, Mass.  Box Office Hours: Wednesday through Saturday from noon to 6pm and 3 hours before show times. For tickets and information, see www.mahaiwe.org or call 413.528.0100.