Jeffrey Gibson at the ICA 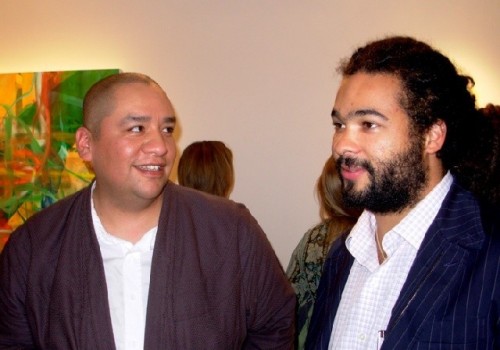 Jeffrey Gibson with gallerist CamilÃ¸ ÃlvÃ¥rez of Samson Projects in 2006. 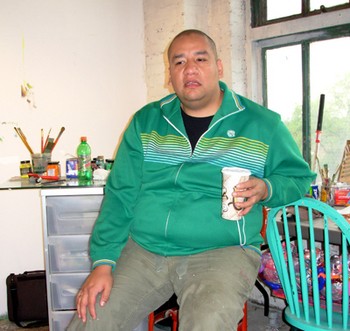 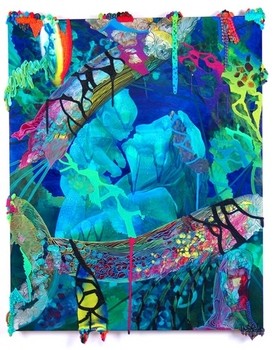 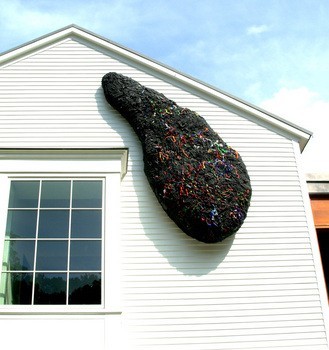 Sculpture applied to an exterior wall at the Aldrich Museum. 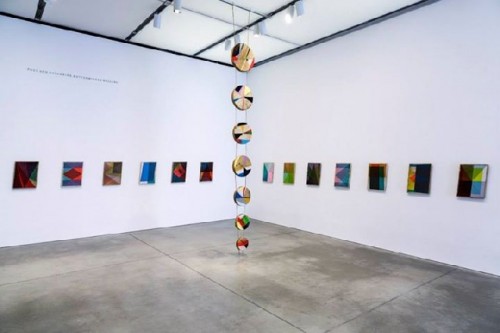 The work as installed at the ICA. 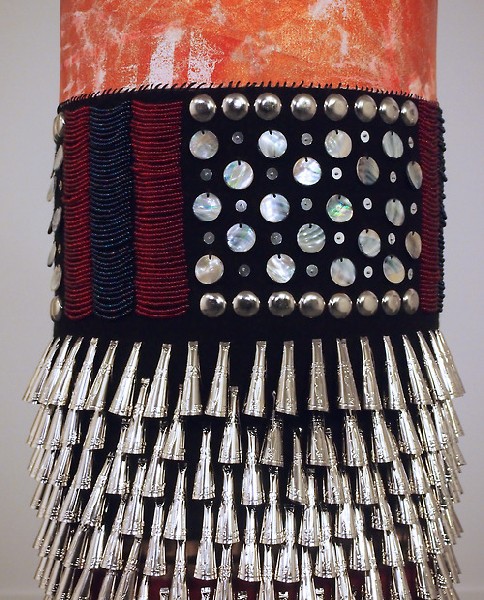 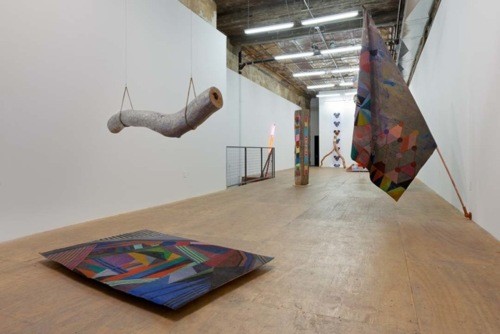 The artist participated in No Reservations: Native American History and Culture in Contemporary Art, curated by Richard Klein for the Aldrich Museum in 2006. His relief sculpture was attached to the exterior wall of the museum.

We were first exposed to the work of Gibson through a two man exhibition with his partner at Samson Projects the gallery of Camilø Álvårez in Boston’s South End.

At the time, largely through an initial contact with Jaune Quick to See Smith, I became interested in aspects of contemporary Native American art. Working with Jaune she created an exhibition of new works on paper for the gallery of the New England School of Art & Design at Suffolk University.

A resident of New Mexico she came for the opening and delivered a memorable presentation providing an overview of Native American art at Suffolk as well as a gallery talk in the exhibition.

It was nearing the end of my tenure as director of the exhibition program but I managed a four person show Native New Yorkers which included Gibson, as well as Peter Jemison, Jason Lujan and Mario Martinez. Again there were gallery talks and related programming.

As a part of research for that project, in 2006, I interviewed Gibson for a piece in Maverick Arts which predated founding Berkshire Fine Arts.

During an April visit to Indianapolis the curator of the Eiteljorg Museum, Jennifer McNutt, conducted us on a tour of its contemporary Native American art collection, the most extensive in the nation.

This included a rare behind the scenes visit to the storage area and its great range of work.

We were delighted to encounter works with artists we had talked with from Duane Slick, a professor at RISD, Jaune, Kay Walking Stick, through a tall, totemic sculpture in poured, stacked pigmented urethane by Gibson. There were seminal works by Fritz Scholder.

The contemporary galleries comprise only a small part of the museum so many of the prized works are only occasionally on display in rotating exhibitions. Hopefully one day there will be a traveling exhibition although mainstream interest in this aspect of contemporary art remains moderate.

Which is why two exhibitions for Suffolk University seemed particularly significant. It would have continued and expanded were it not for my retirement.

The visit by Jaune was so successful and insightful that I prevailed upon the dean, Ken Greenberg, a historian, that Native studies might be a significant niche to add to the study of the arts and humanities.

His response, all too familiar and predictable, was that there are many niches to fill.

It is gratifying to report that Gibson is enjoying a breakout into the mainstream of the art world with museum level exhibitions and reviews in art magazines.

His mixed-media sculptures combine traditional craft with Op Art: drum heads, linked and suspended as a column, are painted with geometric patterns; a recycled army blanket is painted with related motifs and hung from a flag pole. The artist’s most recent paintings, composed on stretched animal hide, are featured in a series titled Constellation.

With the integration of abstraction, Gibson’s provocative use of hide refers to intertribal Native American culture while challenging the trajectory of modern art.

Initially, I found the paintings of Gibson, in that earlier Samson Projects exhibition, garish and overly saturated in chroma.

It was a delight to encounter the restraint and conceptual rigor of the works on view at the ICA.

At first glance it would be difficult for the average visitor to intuit the traditional references. There was a low key, simple sound track of drumming that permeated the room.

Looking about the gallery there were moderately  scaled, rhomboid supports with simple geometric patterns. The guards, eager to discuss the works, pointed out that they were painted on surfaces of deer skin.

The suspended Army blanket, surely a resonant metaphor in Native culture, has painted patterns faintly visible as the pigment was absorbed by unprimed wool.

We encountered a vertical assemblage of hand held, traditional, round drums. Each, like the paintings, had an understated abstract pattern.

According to literature related to the show Gibson traveled to a number of Native communities and engaged in dialogues to get permission to have these ritual objects specifically created, out of context, to be displayed in a museum exhibition.

The negotiations, or respectful interaction between the artist and initially skeptical communities, comprise an important and largely invisible aspect of the creative process.

It is a tribute to Gibson that he serves as a cultural ambassador and intermediary between Native communities and the Anglo art world.

Gibson is half-Cherokee and a member of the Mississippi Band of Choctaw Indians. He was raised in the United States, Germany, and South Korea. He earned a Master of Arts degree in painting at The Royal College of Art, London in 1998 and his Bachelor of Fine Arts degree in painting from the School of the Art Institute of Chicago in 1995.

Significantly, it is indeed challenging to have a moccasin in one world and a shoe in the other. It is the success of this rare feat of legerdemain, or feet, that makes his work both compelling and ready for prime time.

It represents the kind of breakthrough and bridging of gaps that many supporters and creators of Contemporary Native American Art have been hoping for.

This represents a great accomplishment not just for Gibson as an individual artist but for the heritage he respects and interprets.