A Neat little Parable in One Act 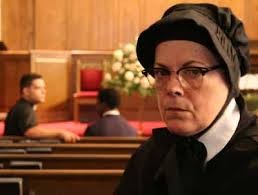 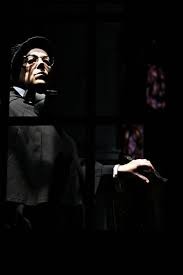 Doubt, the short four-hander by John Patrick Shanley, went over well with the light audience at Oldcastle Theater this past weekend.  The plot, which illustrates a nun’s Ahab-esque pursuit of a priest she suspects of pedophilia, is not difficult to follow and speaks to the times.  In this play, it is never entirely clear who is in the right, and Shanley means that we should leave the theater doubting. In this vein, he allows plenty of room in the dialogue for the actors to develop their own personalities and sway interpretations from production to production or even show to show.  For instance, Sister Aloysius, the accusing nun, can be portrayed as an unquestionable pillar of truth; not a character that the audience might find funny.

The ever capable Christine Decker plays Sister Aloysius with a wry humor that makes her character more human, more likeable perhaps, and yet also more fallible.  Therefore, when her certainty begins to crumble, it comes as less of a shock to the audience, who, in our laughs, were undermining the seriousness of the character.  That said, Ms. Decker makes a strong character choice, plays it well, and in the end, for my part at least, won out.

Also, thanks to Ms. Decker, for the first time I surprisingly found myself sympathizing with Father Flynn, the accused, played by Tim Dugan. He began his opening sermon with a few stiff gestures and run on sentences, but seemed to warm into the role by the second scene. In Mr. Dugan’s hands, Father Flynn eventually materializes as a likeable, caring man who at times seems uncomfortable in his own skin, and, like a puppy dog, enjoys approval from others. After a slow start, it was relieving to see a nuanced and detailed performance emerge instead of just the commanding extravert that one often gets with this role.

The supporting character of Sister James is played by Meredith Muers who neither adds nor detracts from the play.  Ms. Muers was too Pollyannaish for my tastes, which made it hard to believe or relate to the character.  Nehassaiu deGannes is touching as Mrs. Muller, the mother of the supposed victim, and her dress is a model of creamy vintage elegance.  Of course, her costume would stand out because aside from Father Flynn’s clergy robes, habits are rather dull to look at despite the spicy 3.5” heels sported by the modest sisters.

It was quite fun watching shades of these complicated characters play across the simple but well-built office and garden space that serves as a set not three feet beyond the front row. The show ties up well, if a bit tritely: “Oh sister, I have doubts!”, but in general is a nice and short evening out on the town that will spark lots of conversation on the way home.  It plays runs one final weekend.

Tickets at $10 - $37 may be purchased without fear at the door to save yourself a service fee.