The Rise and Fall of WBCN 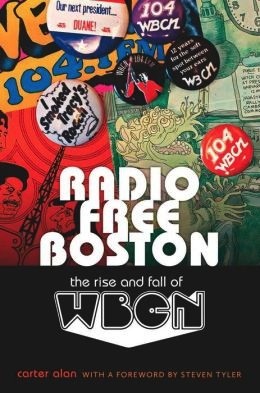 The cover of the Carter Alan book. 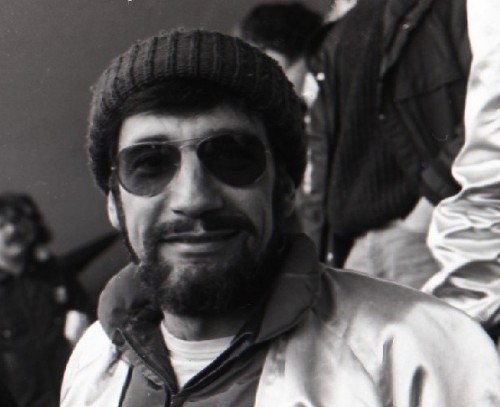 The Big Mattress of Charles Laquidara influenced Howard Stern who later bumped him from the morning slot. Giuliano photos unless indicated otherwise. 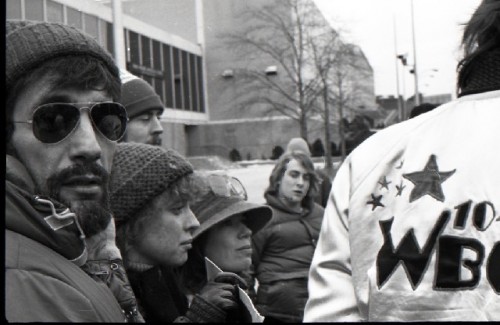 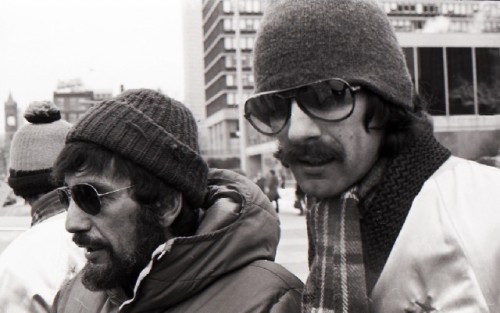 DJs Laquidara and Mark Parenteau during the WBCN strike. 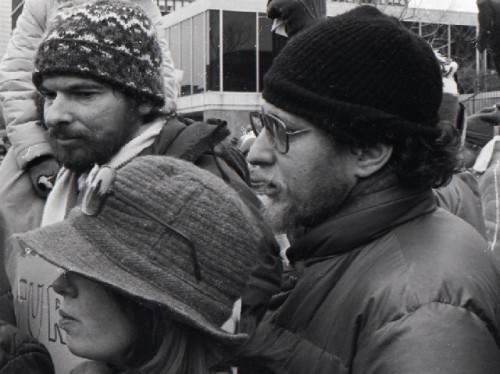 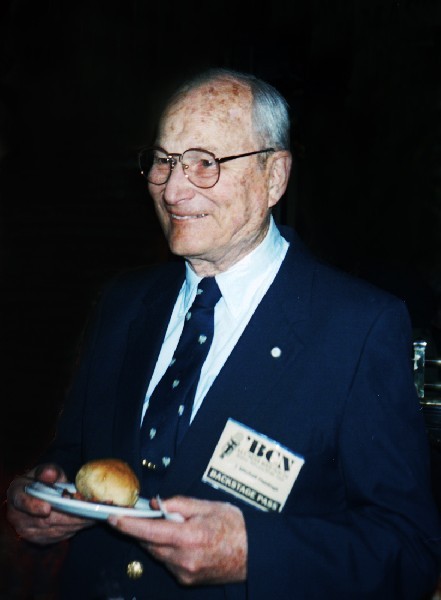 T. Mitchell Hastings founded WBCN as a part of the Concert Network of FM stations. 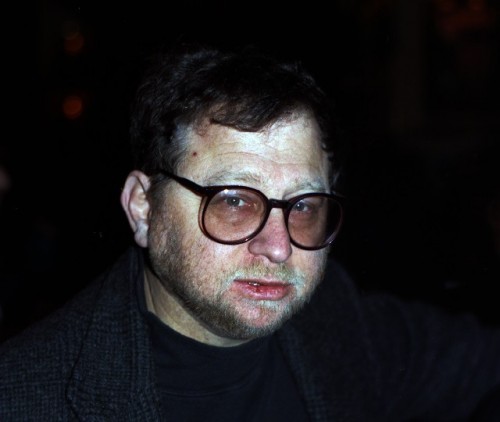 Schechter had a different approach to reporting news and public affairs. 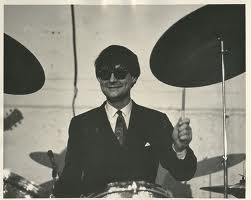 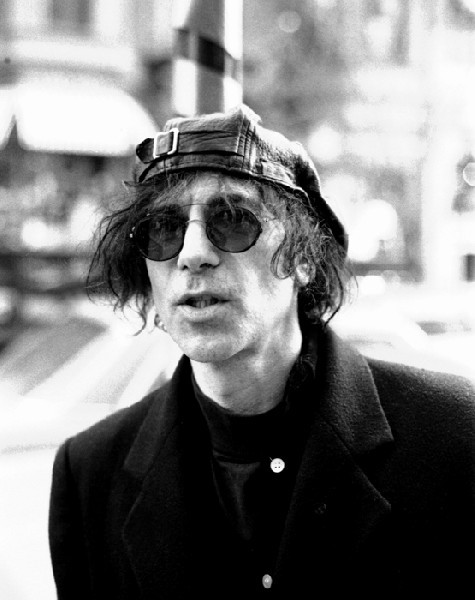 Early on Peter Wolf had to decide between ’BCN and touring with J. Geils. 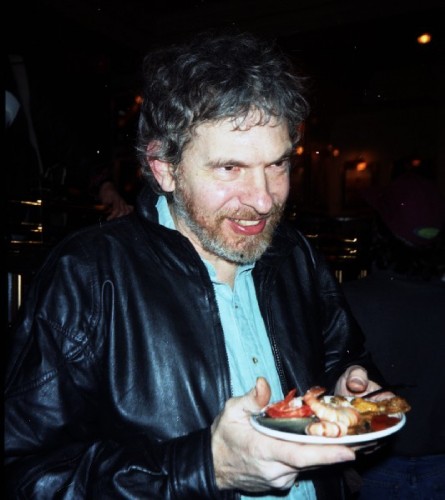 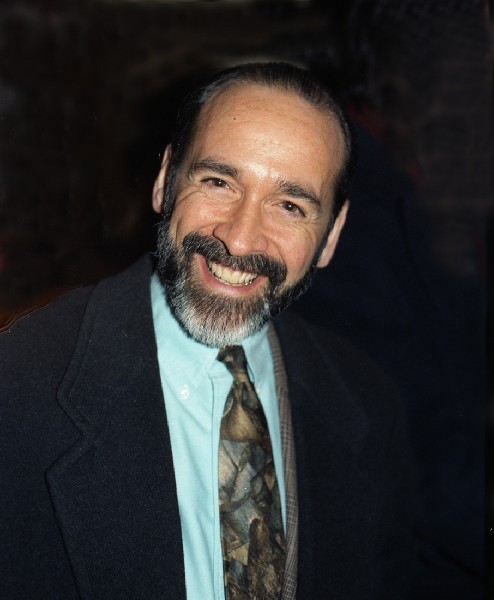 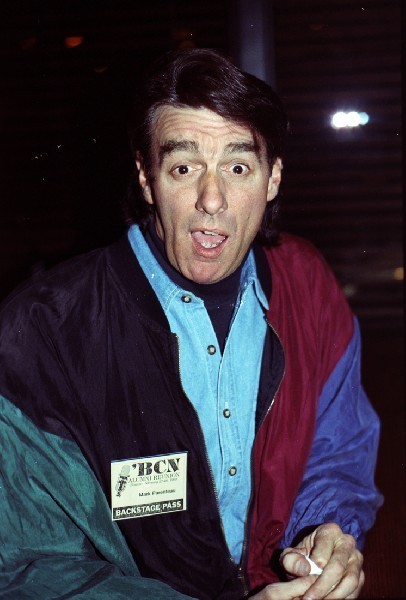 Mark Parenteau was part of the prime time team. 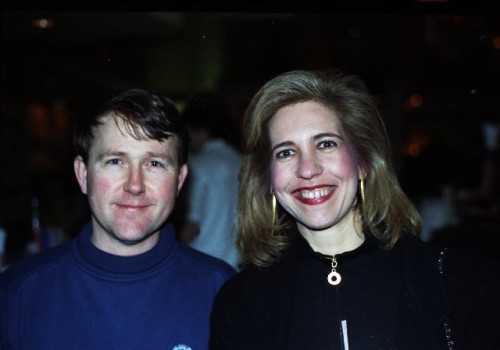 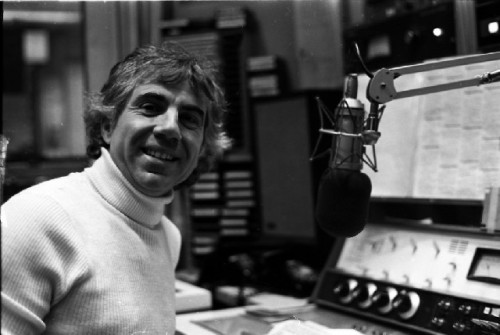 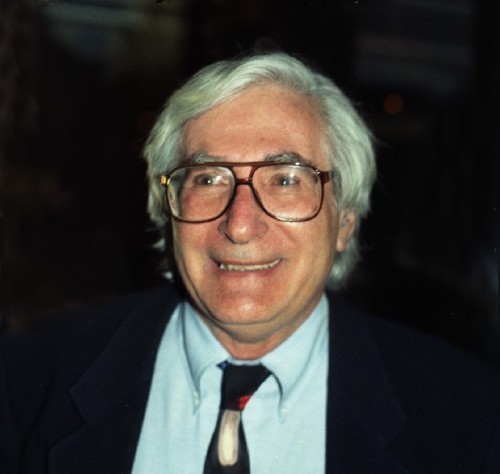 The DJs didn’t get along with manager Arnie Woo Woo Ginsberg. 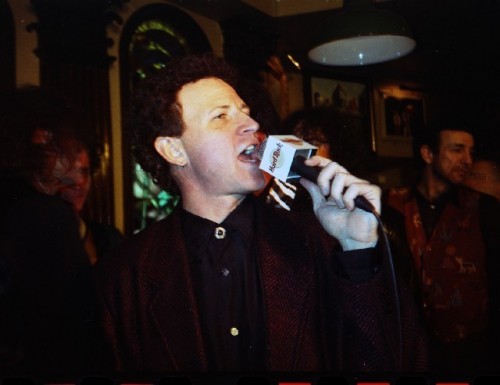 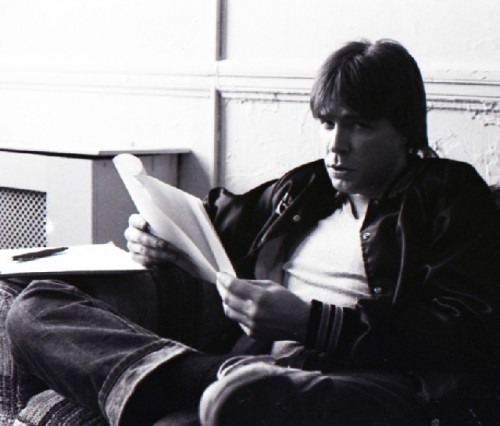 Author and DJ Carter Alan back in the day. 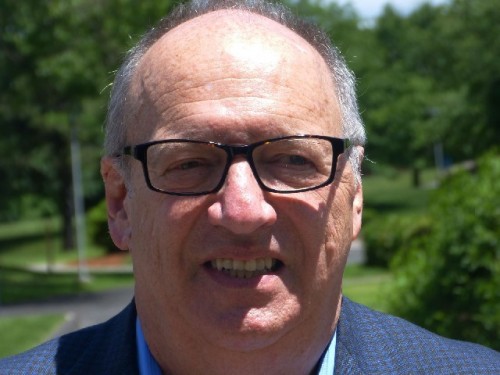 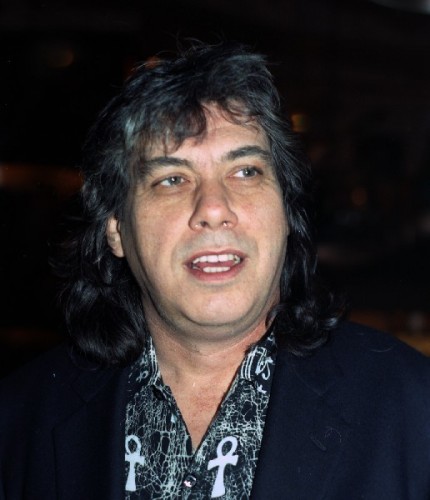 Charlie McKenzie was a record promo guy when he signed to manage Boston. 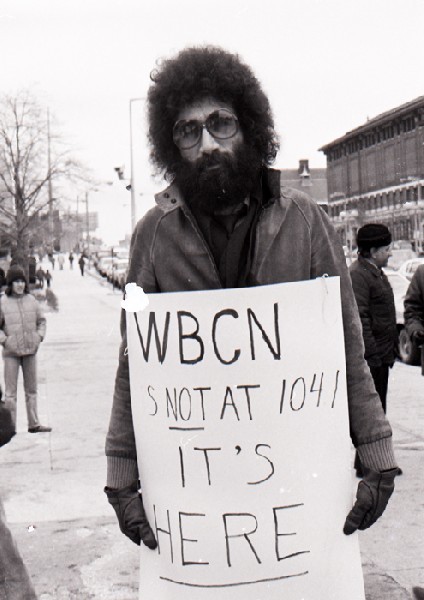 David Bieber was the inventive promo guy for WBCN. 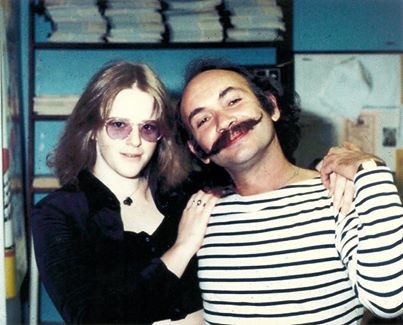 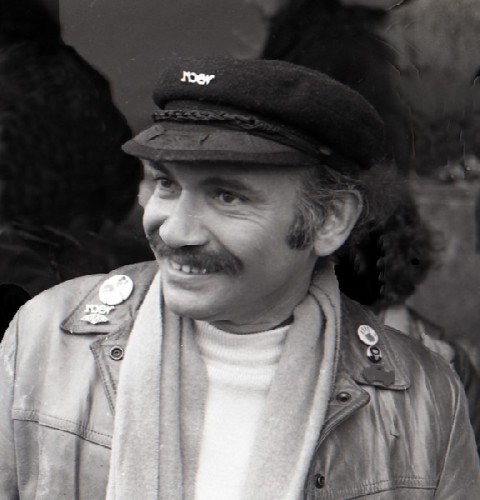 Greenblatt was a neighbor and friend. 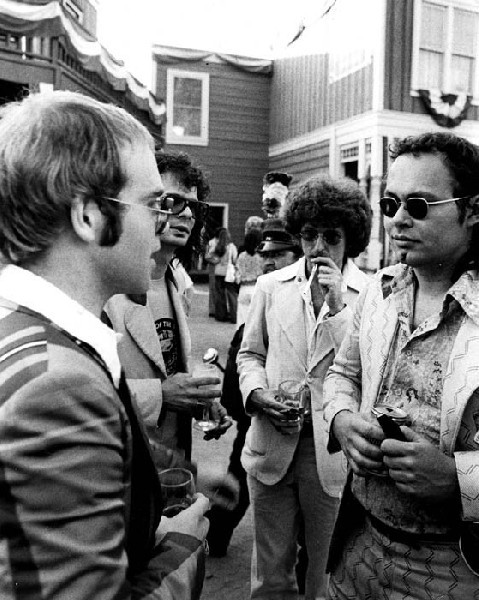 An eccentric, spiritualist and pioneer of FM radio T. Mitchell Hastings established the Concert Network, a series of  stations, to broadcast and franchise live concerts of the Boston Symphony Orchestra and classical music.

Initially a small number of listeners invested in FM radios in order to enjoy the superior signal with less range that was perfect for the acoustics of classical music. But this niche audience was not sufficient to attract advertisers and sustain stations that Hastings was forced to sell off. He later invented and patented an FM car radio.

Near financial ruin he was left with the miniscule operation of WBCN (Boston Concert Network) operating out of an attic of a townhouse on Newbury Street.

As Ron Della Chiesa, for many years a DJ and BSO broadcaster recalled, Hastings gave him his first subsistence radio job. “Back then he was experimenting with anything and everything to pay the bills but nothing worked” he said by phone recently. We were discussing the glory days of the now departed station and some of its famous personalities like Charles Laquidara of The Big Mattress which influenced Howard Stern then a student at BU where Della Chiesa majored in broadcast journalism.

With a laugh Ron recalled how Laquidara walked away with a Golden Parachute resulting from a buyout when his twenty year run of waking up Boston with a heady and inventive mélange of mishegos was replaced by the syndicated Stern.

“A couple of years ago Joyce and I visited Charles in Maui” he recalled. “He gets up early to feed the birds. When people ask me about Howard Stern I answer ‘For every Howard Stern, hopefully, there’s an Isaac Stern.’ ”

For many who cared about the unique and innovative ‘BCN the switch from Laquidara to Stern marked the beginning of the end for the station. In reality there were many beginnings and many ends for alternative rock in Boston. The spectacular ratings and resultant staggering billing for Stern, as much as $25,000 for a single spot, only stalled the inevitable. When Stern departed for Sirius and subscriber radio the end was not long in coming. By the time of the ceremonious, four day long signoff in 2009, featuring many of the DJ’s and clips from over the years, it was all about money. Or the lack thereof.

With tight formats, cheesy play lists and a pervasive, bottom line mentality, commercial radio has come full circle to what it was when a maverick attorney and entrepreneur Ray Riepen talked Hastings into experimenting with an album orientated rock format. That entailed complete freedom for on air personalities starting with later rock star Peter Wolf. Riepen had been listening to tapes from KSAN in San Francisco and a handful of other alternative stations.

Looking to college radio stations Riepen staffed the station with laid back hipster DJ's with a passion for the music they played and bands they broke over the years from Aerosmith to U2.

Having changed forever Boston's counter culture the eccentric Riepen cashed in his interests and purchased an abandoned mining town in the West.

In 1968 when ‘BCN launched what was later dubbed the Rock of Boston with Cream’s “I Feel Free” there was little or no progressive rock on commercial radio. With the demise of ‘BCN when it signed off with Pink Floyd’s “Shine on You Crazy Diamond” in 2009 yet again only college stations are playing local bands or exposing listeners to new music.

But ‘BCN’s DJ’s were deprived of playing the music they liked long before the drawn out bitter end.

In a meticulously detailed often fascinating book a former ‘BCN and current WZLX on air personality, Carter Alan, discusses what happened in between.

For all of its magnificence and glory the real question is whether today anyone cares. That was then and ‘BCN is a fossil from another era.

True. But I read Alan’s book with riveted and attentive interest because I rocked through those days. Back then ‘BCN was the only radio that captured the pulse of a time of social and political upheaval. For at least the first half of the book most of the individuals he covers were friends, neighbors and colleagues. It was interesting to read his accounts of many of the people and events I experienced directly.

My problem, particularly with coverage of the formative years, is his narrow focus on the period. While essential the radio station was only a part of a larger picture of alternative media that for me started with Avatar, the underground press, Boston After Dark which became The Phoenix, the Real Paper a cooperative spin off, Broadside/ Free Press and the leftist Old Mole. We were involved with and covering not just emerging rock, but anti war protests, women’s liberation, gay rights, the Black Panthers, post colonialism and leftist issues in general.

Reading Alan’s account he seems locked into the studio spinning sides with the doors and windows shut. There is not a whiff of the tear gas and blood shed at home and in Vietnam. No, not true, now and then there is an obligatory taste of the zeitgeist but that’s not what Carter is really focused on.

This might have read more broadly as an allegory of the death of revolution and the morph to corporate complacency. We might have followed the trajectory of an entire once activist generation now enjoying their golden years in Florida and Maui.

Like many survivors of those wild and crazy days I parody myself by relating war stories of times gone by to the few who vaguely remember or give a damn. À la recherche du temps perdu.

Some years ago I chided my class of college students for their social and political apathy. A youngster from the back of the room interrupted to say “Oh Mr. Giuliano you’re so Joan Baez.”

Of course I thought of that a couple of years ago when Baez, now a grandmother, performed at Tanglewood. She still had that magnificent voice if not quite the range.

Sure she plugged issues and causes but it wasn’t the same as seeing her at Club 47 with her then boyfriend Bob Dylan or solo in a dorm as an undergraduate at Brandeis.

With the book as a kind of time line for my own alternative life there were a thousand tiny deaths as we morphed into what we are today.

In 1972 Michael Wiener and Gerry Carrus formed Progressive Communications Corporation. In 1978 Hastings sold the station to them for a measly $3 million. At its peak annual billings were above $30 million.  When the new owners came in and started firing staff the station organized and went on strike eventually coming to terms with Hemisphere Broadcasting Corporation.

The big three of Laquidara, Ken Shelton and Mark Parenteau dominated daytime programming but with time the stations flanks eroded with competitors carving out aspects of the demographics with more progressive formats.

With a series of ever greater mergers and resultant earnings targets there were interesting moves but with hindsight it is clear that ‘BCN by keeping up was actually falling behind.

In the final years I mostly tuned in for the Sunday New England Patriots broadcasts.

Earlier on I was often a guest for live broadcasts from the intimate Intermedia Studios on Newbury Street or for events orchestrated by a marketing genius David Bieber. My inside man at the station was the flamboyant sales rep Kenny Greenblatt. With great inflection he loved to convey the latest inside scoops.

It was a great period for Boston bands. Members of the J. Geils band were neighbors when not on tour. Maxanne dragged me and tons of others to gigs during the formative years of Aerosmith. She was living with rocker Billy Squire. Promo guys Charlie McKenzie and Paul Ahearn broke and managed the platinum group Boston.

Reading Carter’s book there were a lot of later bands that didn’t last long and were never all that interesting. Eventually one could ignore them and ‘BCN with impunity. By the end other than flashbacks of nostalgia it mostly didn’t matter.

Boston continues to be a vital music scene with tons of bands getting little or no air time or media coverage.

Since I didn’t really know Carter I was surprised when he asked me to be a judge during ‘BCN’s then annual Rumble at the Rat, a basement dive in Kenmore Square.

Mixed up on the early start I arrived after the first band. Carter disqualified me but I hung out to listen and cover the bands. It was fun but the Rat wasn’t my scene.

Since Carter’s book came out a year ago, and this review is late, he would probably fire me again.

With caveats this was a good read. It was fun recalling when we were young, revolutionary, stoned and groovy.

Back then 'BCN mattered.