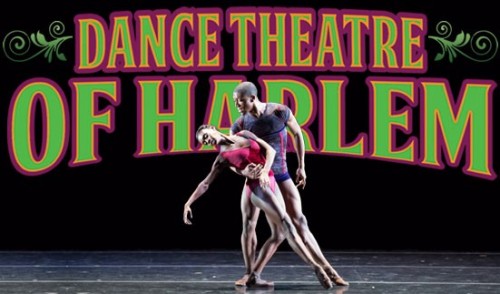 Following a successful opening week of Festival 2013, Dance Theatre of Harlem returns with an all-new program. DTH gave its first professional performance at Jacob’s Pillow Dance Festival in 1970; since that date, DTH and the Pillow have enjoyed a longstanding and fruitful artistic relationship. The company, led by Artistic Director Virginia Johnson, performs Donald Byrd’s smooth yet power-packed contemporary ballet Contested Space, which features a plethora of solos and duets. past-carry-forward, created for DTH by Tanya Wideman-Davis and Thaddeus Davis, conveys the spirit and significance of the Harlem Renaissance. The cornerstone of this dynamic evening is the late choreographer Ulysses Dove’s moving, elegiac ballet Dancing on the Front Porch of Heaven, danced to “Cantus in Memory of Benjamin Britten” by Arvo Pärt. The company appears in a special seven-show engagement in the Ted Shawn Theatre at Jacob’s Pillow, July

“The founding and history of Dance Theatre of Harlem is an inspiring chapter in the story of dance in America,” says Pillow Executive and Artistic Director Ella Baff. “Today, the company continues to hold a special place in dance, with dramatic choreography and exciting dancers who perform with great heart and soul.  Audiences respond; DTH is one of the most popular companies

Donald Byrd’s Contested Space highlights the power of its ten dancers, with steely-strong partnering and pliant flexibility. The women of the company execute thrilling pointe work as fast as lightning; the men dazzle in acrobatic leaps and lunges that prove their athleticism and strength. Brazilian electronic music composer Amon Tobin contributes a driving score, while Peter D. Leonard’s lighting design sets a cool yet sultry tone. “There's a sexual thread in [Contested Space],” wrote Michael Upchurch of The Seattle Times, “and something sterner and chillier

A theatrical work blending narrative and abstract movement, past-carry-forward “bristles with a feeling of vitality and opportunity, with devil-may-care partnering and fast footwork” (Sarah Halzack, The Washington Post). Former company members Tanya Wideman-Davis and Thaddeus Davis created past-carry-forward for DTH in 2013, drawing inspiration from the Harlem Renaissance and from the idea of “double consciousness,” a concept set forth by sociologist and activist W.E.B. Du Bois, a Berkshire County native. The work unfolds in scenarios, set to the music of Willie “The Lion” Smith and SLIPPAGE, exploring Harlem nightlife, military segregation, and the civil rights movement, culminating in a reflection on racism and

Mesmerizing in its grace, Dancing on the Front Porch of Heaven by the late choreographer Ulysses Dove is a reverent contemporary ballet set to composer Arvo Pärt’s “Cantus in Memory of Benjamin Britten.” A work for six dancers, Heaven features an articulate movement vocabulary and weightless partnering, including an intimate duet for two men. The ballet has been performed at the Pillow on multiple occasions since its 1993 premiere, most recently in 2009 by Pacific Northwest Ballet; Seattle Times writer Moira Macdonald wrote of a PNB performance of the work: “[Heaven] doesn’t end so much as fade away, and it leaves the watcher moved and changed; like a poem you don’t quite realize you’ve

Dance Theatre of Harlem has recently returned to fulltime operation from a nine-year hiatus, during which time the school (including the performing Ensemble) continued to operate. The company marked its reemergence with its Jacob’s Pillow Festival 2013 engagement, prompting audience excitement and critical acclaim — Tresca Weinstein of The Albany Times Union wrote that the company “is back on its feet—with a vengeance.” Under the direction of founding company member Virginia Johnson, herself a celebrated ballerina and the founding editor-in-chief of Pointe Magazine, DTH boasts stellar classically-trained dancers from a variety of backgrounds including Dance Theatre of Harlem School, American Ballet Theatre's Jacqueline Kennedy Onassis, School Pacific Northwest Ballet, Joffrey Ballet, Kirov Academy of Ballet, The Australian Ballet, Boston Ballet, and The Ailey School.

Company History: DTH founder Arthur Mitchell made history in 1955 as the first African American member of the New York City Ballet. Following Dr. Martin Luther King’s assassination in 1968, he shifted his focus from his own career to the careers of young dancers of color. After leaving NYCB and founding the Dance Theatre of Harlem School, a professional company was soon established and made its official debut at Jacob’s Pillow in 1970. The company, comprised of African-American and other racially diverse artists, soon rose to ground-breaking prominence and performance level that was ranked with the major ballet companies of the world. After many years of success, DTH went on hiatus in 2004. Today, a revitalized Dance Theatre of Harlem offers a range of education, community engagement and audience development activities—and has re-entered touring, the creation of new work, and a home season. Robert Johnson of The New Jersey Star Ledger comments, “Reborn last fall under the stewardship of artistic director Virginia Johnson, the company’s former prima ballerina, DTH is lighter and leaner, with a roster of fresh faces and a contemporary repertoire. The troupe’s mission remains the same, however. The goal is to expand America’s awareness of classical ballet ‘and to bring dancers of color into it.’”

Festival Connections: Dance Theatre of Harlem made its company debut at Jacob’s Pillow in 1970, and returned in 1973 and 1997. Forty years after this auspicious debut, and as part of the revival of DTH, the Dance Theatre of Harlem Ensemble was invited to perform at the 2010 Festival in the Doris Duke Theatre. Virginia Johnson served as master faculty in The School at Jacob’s Pillow that same year and participated in a PillowTalk called "Virginia Johnson Returns." In 2012, a special appearance by DTH founder Arthur Mitchell closed each performance of The Men Dancers: From the Horse’s Mouth, created especially for the Pillow’s 80th Anniversary Season. DTH opened the 2013 Festival with sold-out houses in the Ted Shawn Theatre.

Related Events: Artistic Director Virginia Johnson joins Misty Copeland, a soloist with American Ballet Theatre, for a PillowTalk on Saturday, July 12 called “Black Ballerinas: What’s New?” Johnson was a founding member of Dance Theatre of Harlem and is widely acknowledged to have paved the way for generations of African-American dancers to follow; she was also the founding editor of Pointe Magazine. Copeland, a member of ABT since 2001, has originated lead roles in several ballets by Alexei Ratmansky and was praised for her “old-style ballerina grandeur and assurance” by Jennifer Dunning of The New York Times. She is the second African-American woman to ever be promoted to soloist at ABT.

The art of the dance movie poster is celebrated in this extraordinary group of vintage posters from throughout the world, selected from the personal collection of one of the genre’s foremost experts, Mike Kaplan, an award winning campaign designer and producer. Among the star dancers featured are Gene Kelly, Rita Hayworth, Cyd Charisse, and Astaire & Rogers, with a special salute to Marge Champion on the occasion of her 95th birthday.

One hundred years ago this summer, the iconic dance soloist Ruth St. Denis married Pillow founder Ted Shawn and formed a company that spawned American modern dance. Their union was celebrated here with a lavish 50th Anniversary celebration in 1964 (despite their formal separation in 1930), and now their partnership is explored through treasures from the Jacob’s Pillow Archives.

This informal library and reading room allows impromptu visitors to view videos, browse through books, access the Pillow's computer catalog, or peruse permanent collections of Pillow programs and photographs. Pillow Interactive, the popular touch-screen kiosk, provides instant access to rare film clips ranging from the present day back to the 1930s. Visitors may also sample videos from other Dance Heritage Coalition archives and companies throughout the country. FREE

Ryan P. Casey, a founding company member of Michelle Dorrance’s Dorrance Dance, presents exciting tap dance. Originally from Lexington, Massachusetts, Casey has studied at The School at Jacob’s Pillow and appeared on So You Think You Can Dance. FREE

Abarukas was founded in 2009 by Yoshito Sakuraba, who came to New York from his native Japan at the age of 19 and studied at the Martha Graham School. Sakuraba’s choreography layers precise detail, intricate patterns, and emotionally evocative sound scores to create theatrical contemporary dance. The dancers of Abarukas hail from across the United States, Chile, Spain, Taiwan, and China. FREE

Misty Copeland has written a new book about her life as American Ballet Theatre’s only black soloist, while Virginia Johnson now directs Dance Theatre of Harlem. Here they discuss both achievements and challenges for ballet dancers of color. FREE