The Manton Collection: the Clark becomes a major repository of British art overnight. 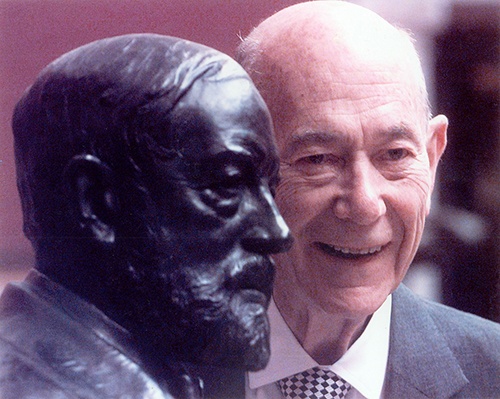 Sir Edwin Manton beside the bust of Sir Henry Tate 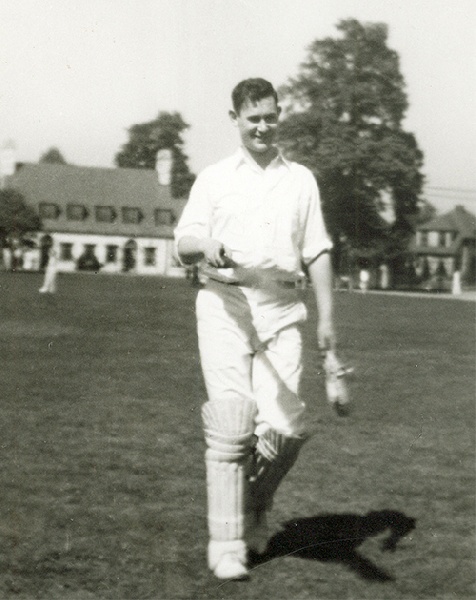 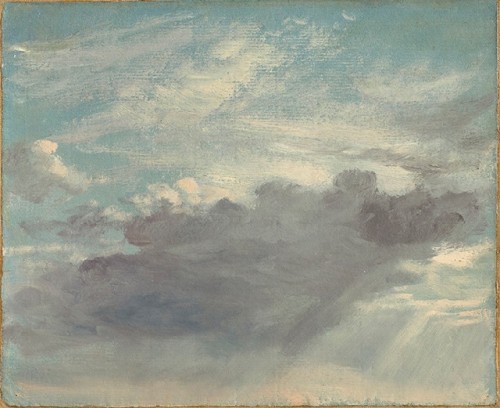 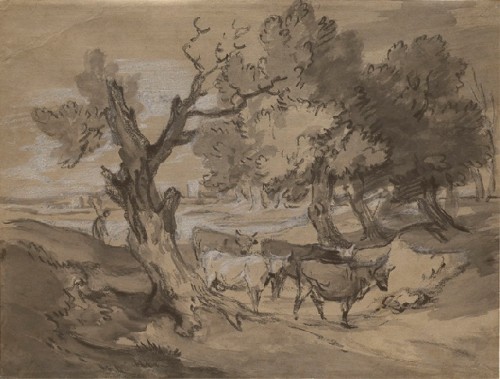 Landscape with a Herdsman Driving Cows, and Distant Buildings, c. 1785-88, by Thomas Gainsborough 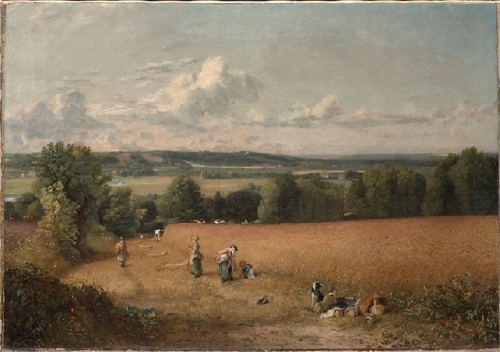 The Wheatfield, 1816, by John Constable, oil on canvas, Gift of the Manton Foundation, The Sterling and Francine Clark Art Institute, Williamstown, Massachusetts 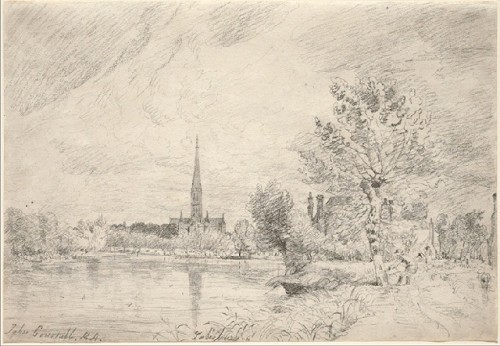 Salisbury Cathedral from the West, 1829, by John Constable, pencil, Gift of the Manton Foundation, The Sterling and Francine Clark Art Institute, Williamstown, Massachusetts 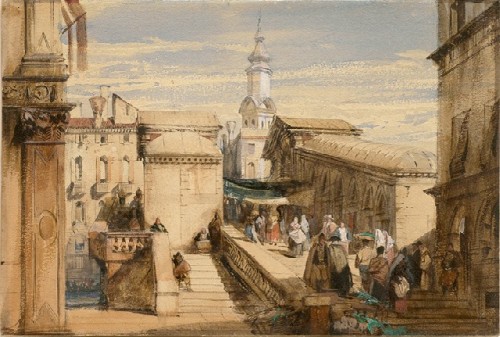 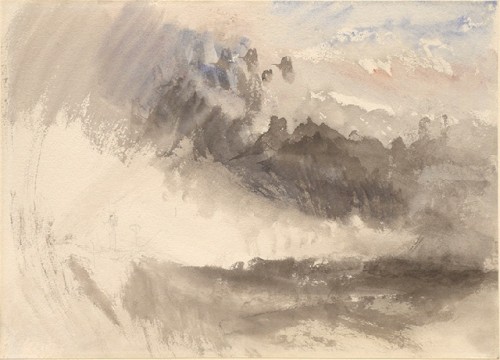 Sky and Sea, c. 1826-9, by J.M.W. Turner, Pencil and watercolor on paper, Gift of the Manton Foundation, The Sterling and Francine Clark Art Institute, Williamstown, Massachusetts 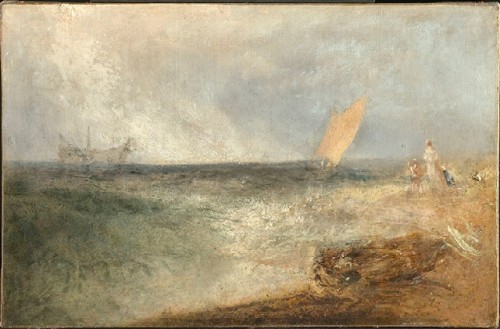 Off Ramsgate, c. 1840, by J.M.W. Turner, Oil on canvas, Gift of the Manton Foundation, The Sterling and Francine Clark Art Institute, Williamstown, Massachusetts 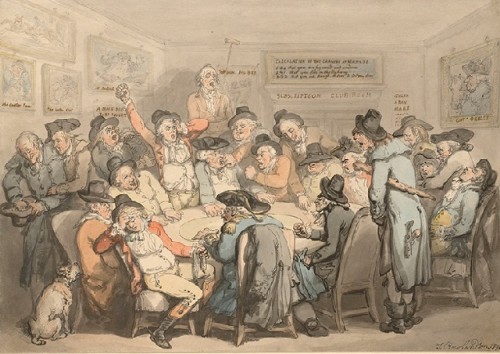 The Subscription Club Room, 1791, by Thomas Rowlandson, Pencil, pen and ink, and watercolor on paper, Gift of the Manton Foundation, The Sterling and Francine Clark Art Institute, Williamstown, Massachusetts

- click for more
The Sterling and Francine Clark Art Institute have suddenly and unexpectedly released some rather breath-taking news, which signals a radical change in the character of their collection and their mission as a research institution. As part of a $90 million gift from the Manton Foundation, the Clark have just received $50 million for its Research and Academic Programs as well as The Manton Collection, over 200 paintings, drawings, watercolors, and prints by the great British artists of the early 19th century: J. M. W. Turner (1775-1851), John Constable (1776 - 1837), Thomas Gainsborough (1727-88), Samuel Palmer (1805-81), Thomas Girtin (1775-1802), Thomas Rowlandson (1756/7-1827), John Martin (1789-1854), Richard Parkes Bonington (1802-28), William Blake (1757-1827), and others. While the donation to the Research and Academic Programs brings this already impressive aspect of the Clark's mission up to an entirely new level, the Manton Collection instantly makes the Clark one of the most important repositories of British art in North America. This is by no means some sterile fact that will interest only scholarly specialists and people obsessed with keeping score among the museums of the world. Most of these works are representative of the very best work of these artists, and they are in pristine, fresh condition, a rare quality in watercolors, which, fugitive as they are, were often displayed framed as part of domestic decoration. A splendid selection of the collection just went on public view at the Clark and will remain in the galleries until the end of the summerÂ—an exhibition not to be missed.

This should be an extraordinarily busy summer at the ClarkÂ—apart from the milestone exhibition of Monet drawings and pastels, The Unknown MonetÂ—as lovers of British art flock to Williamstown to see this collection, which rivals the holdings of the Yale Center for British Art, the Metropolitan Museum, and the Morgan Library. Perhaps one can only expect to see Constables, Gainsboroughs, and Palmers of this quality at the Tate, an institution which Sir Edwin Manton, who put this collection together beginning in the 1940's, fervently supported over the years. On the whole these works are not large, and many of the most affecting are the among the most intimate, like the group of small oil sketches by Constable, or John Martin's Extensive Landscape (1837). Exceptions are Samuel Palmer's monumental watercolor, The Setting Sun (c. 1862), and Rowlandson's exceptionally finished and well-preserved The Subscription Club Room (1791). Lovers of Constable will be thrilled to see, among the thirty Constables on view, both a pencil drawing and a superb oil sketch of Salisbury Cathedral, both from 1829, a few years later than the famous, more finished versions in the Victoria and Albert Museum and the Metropolitan Museum of Art. Sir Edwin Manton, as a collector, will be remembered not only for his eye for quality and standards regarding condition, but for his concern to show a comprehensive view of the artists' different modes of working through their careers. We not only see tidy early Gainsboroughs, but moody late ones in oil, watercolor, chalk and pen. Of Constable there is the magnificent finished painting, The Wheatfield of 1816, but also cloud studies, coastal landscapes, rural scenes, amazing studies of vegetation like the almost monochromatic oil sketch of burdock (c. 1810-14 or c. 1828) and watercolor studies for The Opening of Waterloo Bridge, c. 1829 and The Houses of Parliament on Fire (1834). One of the most fascinating Constable sheets bears a double sketch in pen interspersed with lines by Robert Burns, a poignant reminder of the affinity between sketching and poetry in the romantic age and of Burns' sensitivity to nature.

Around me scowls a wintry sky,
Blasting each bud of hope and joy;
And shelter, shade, nor home have I;
Save in these arms of thine, Love.

The representation of Turner is no less comprehensive, including a vaporous cloud study, Sky and Sea (c. 1826-29), watercolor studies with figures, like Off Ramsgate (c. 1840), topographical views of Italy, Britain, and France, and the bizarre narrative scene, What You Will! (1822). Bonington appears in three fine examples, and John Martin's Extensive Landscape (1837) stands out for its haunting concentration of a vast vision onto a minuscule surface.

As the Clark has made clear, either part of this gift is the most important since the founding of the museum itself in 1955. Some names will change. The building that houses the Clark's Research and Academic Program will be renamed the Sir Edwin and Lady Manton Research Center. The study center for works on paper, a gallery dedicated to British art, as well as the position of curator of prints, drawings, and photographs also will carry his name.

Sir Edwin A. G. Manton was born in Earls Coyne, Suffolk, not far from John Constable's birthplace in East Bergholt. He came to New York in 1933 to take a position at the then young American International Group (AIG) and quickly rose through the ranks to become President in 1942 and Chairman in 1969. Although his home continued to be New York, he remained a British subject until the end of his life. He founded the American Patrons of the Tate in 1988 and was knighted in 1994. He died at the age of 96 in 2005. Sir Edwin began to collect in the 1940's, learning by trial and error, but frequenting the best galleries and learning from some of the leading experts in the field, while primarily following his own judgement, which was obviously very sound. His personal taste and rigorous standards of quality and condition are made eminently clear in the exhibition, but above all his direct emotional response to these English masters.

The Clark deserves the warmest congratulations, not only on their acquisitive coup, but on the focused and elegant installation. The Manton Collection is not just a windfall for the Clark, but a consistent step forward in their acquisitions policy of recent years, which has concentrated on important groups of works which enhance an area of the collection in a purposeful way, for example 19th century photography, the group of more than thirty drawings purchased from the John and Alice Steiner Collection. We can only wonder what will come next.