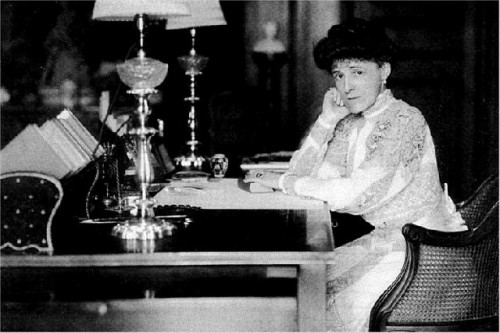 Edith Wharton referred to Summer as her Hot Ethan.

Get ready for Summer! Tickets go on sale Monday, June 21, for Edith Wharton’s bittersweet coming-of-age story, performed by the Wharton Salon August 18-29 at The Mount. Following last summer’s sold-out run of “Xingu,” The Mount is pleased to welcome the Wharton Salon back this season for Summer, adapted by Dennis Krausnick and directed by the Salon’s founder, Catherine Taylor-Williams. The play, based on the 1917 novella Wharton fondly called her “hot Ethan,” is the story of a young woman who loses herself in the passion of a summer love affair, only to find herself more deeply by summer’s end. Like its better known counterpart, Ethan Frome, the tale is set in the Berkshire landscape Wharton loved.

“This is the summer of the written word at The Mount,” said Susan Wissler, Executive Director. “As part of our commitment to exploring and celebrating Wharton’s words, we are delighted to continue our partnership with the Wharton Salon and present another compelling Wharton work in adaptation. Where better to see Wharton’s words come to life than at The Mount, the home she created?”

“Everyone was so pleased with how things went last year we thought we’d better come back,” said Catherine Taylor-Williams, founder of the Wharton Salon. “I am excited to take on the challenge of directing this fragile coming-of-age story, and to have the chance to expand our company of actors and offer a longer run for the audience.”

Background on Summer, the Novella

Published in 1917 when Wharton was living in France, Summer conjures up the Berkshire landscape Wharton had left behind and unfolds a classic coming-of-age tale centered on the sexual awakening and self-discovery of a young woman, Charity Royall, over the course of a single summer in 1890. Royall’s passion and its consequences are reflected in the hills and trees of her native Berkshires; this charged atmosphere is one reason Wharton referred to the book as her “hot Ethan,” invoking her popular 1911 novel, Ethan Frome, also set in the Berkshires but in the frigid heart of winter.

Synopsis of Summer, the Play

Charity Royall (Alyssa Hughlett) is bored and restless. Working at the local library to save money to escape her hometown, she meets newcomer Lucius Harney (Adam Gauger), a handsome young New York relative of the town’s “first family” who is researching a book about the historic houses in the area. Their early romance is thwarted at first by Mr. Royall (Miles Herter), her oppressive guardian, who makes an unwanted proposal of marriage to keep Charity to himself. Amidst the growing suspicions of the townspeople, the relationship between Harney and Charity blooms in secret. By late August, however, Charity is alone and pregnant. Harney has left town to marry Annabel Balch (Rory Hammond), a girl of his own class and “the Beauty of Springfield.” Charity begins a desperate search to secure the survival of her child, a journey that leads her to self-discovery and, ultimately, self-acceptance.

All performances take place in The Mount’s Stables Auditorium (wheelchair accessible) at the entrance to Wharton’s historic estate. The play runs 90 minutes without intermission. Audiences are encouraged to make reservations in advance, as the intimate 90-seat venue sells out quickly. Summer has mature themes and may not be appropriate for children.