Entertaining And Clever Musical Based On NPR Show 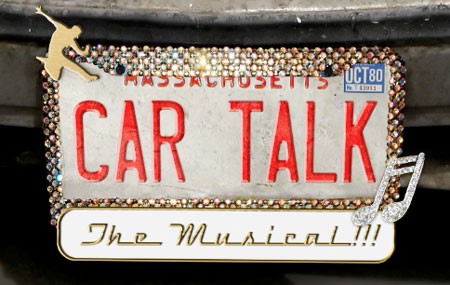 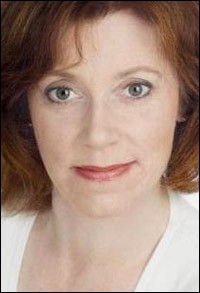 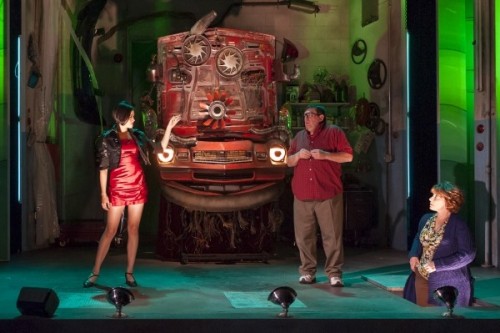 Tiffany Chen as Miata, the Wizard of Cahs, Scott Severance as Rusty Fenders and Leigh Barrettt as Sheila. 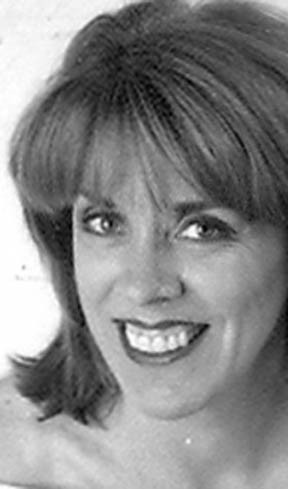 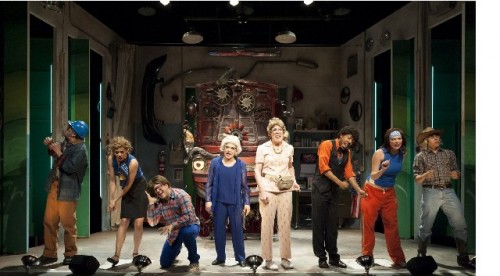 The chorus of Car Talk: The Musical 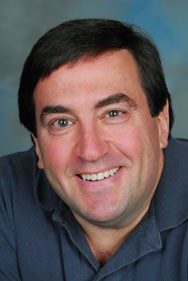 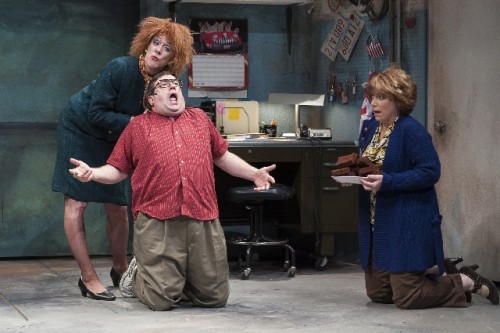 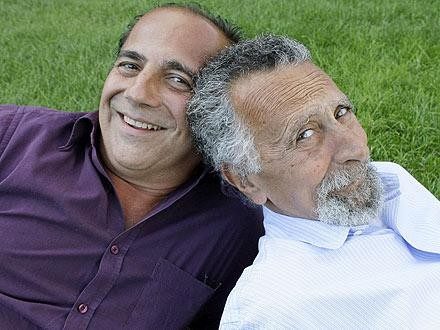 The Less than retiring Tom and Ray Magliozzi are actually retiring from Car Talk after 35 years.

Riding in your car is a no brainer until it breaks down. Then vehicular nervosa or automotive neurosis sets in. Car Talk has been a decades long hilarious mechanics' diagnositic and remedy vehicle.

Car Talk:The Musical is a refreshing summer treat not unlike when you get a tune-up for your car--your oil changed and your plugs replaced. Once you see the show, you just seem to ride better with a big smile on your face.

When your less than reliable clunker breaks down, the fear and angst of getting repairs is like going to the dentist for a root canal. This pain is even greater because not so benevolent garage mechanics speak to you in a language and a set of financial calculations all of their own. Because you really don't know what the pain or cost will be like to get your car back on the road, you feel like and literally are a victim.

For 35 years, National Public Radio's Car Talk has tried to make this exasperating situation more understandable and palatible. Tom and Ray, the brothers Magliozzi as Click and Clack, the Tappet Brothers, have laughed, chuckled, insulted and soothed their way through endless clangs and bangs, wheezes and rattles to impart mechanical wisdom to thousands of desparate housewives, pitiful professionals, stupified students and languishing lay-abouts.

All this has been done with a strong regional Boston accent ("Cah" instead of "Car") by the MIT-trained Cambridge-raised duo. This interaction is the premise of the role of this automotive focused new musical.

The repair process effects all aspects of your life--including your sense of well being, personal inner self-worth, trust of humankind and individual mobility. And this is what the clever, energetic and melodious Car Talk:The Musical now playing at Cambridge's Central Square Theater is all about.

The premise of this show is the downward spiral and eventual triumph (not the car) of loser Rusty Fenders played by a terrific Scott Severance who only ocassionally chews the scenery or the leather upholstery but sings, dances and delivers lines and dialogue that describe his decrepit '93 Kia Pride and himself. The Dream Rusty is talentedly played with aplomb by Jonathan Luke Stevens. Like the old KIA, both Rustys are at various times on life-support systems. While the car could be junked, Rusty has a problem with his heart both physically and romantically.

Rusty insentively and stupidly does not recognize his not so secret admirer Sheila. This love interest is played by the multi-talented and (and even dressed down) striking Leigh Barrett. Rusty is really something of a loser. Sheila, on the other hand, is both protective, thoughtful and grounded. Barrett's portrayal and overall performance are measured and lovely like the actress herself. She is wonderful in the role. Sheila may be just too pretty and too good for Rusty. But it is a musical! Personally, I have a crush on her.

Maureen Keiller as Beulah Gasket is a hoot, a combination 101 Dalmations' Cruella De Vil and Annie's Miss Hannigan. Her other roles in the show are notable as well. The whole ensemble is terrific. Each one performs at a high level.

The choreography by Michelle Chasse is rhythmic and strong. The set by Susan Zeeman Rogers and lighting by Jeff Adelbergare are both clever and elegant. The Wizard of Cahs is a hulking puppet by David Fichter. Everything is musically punctuated by sound designer David Remedios.

The interspersing of show tune parodies throughout the production is a total theatrical treat. These are so cleverly done that the audience wants more at the end of each song. And perhaps that is the point of the show: we are transfixed by the familiar as it relates to the fantasy.

NPR's Car Talk, soon to end (alas, Tom and Ray are retiring), is a radio fixture of our Saturday morning life. Driving our cars are an integral part of our society and culture. Car Talk has allowed us to go beyond the mundane to the entertaining and laughable. Everyday difficulties like our car breaking down or just annoying bangs, knocks and rattles become objects and incidents of fun, derision and humor. We seem to not be able to do without our individual or sometimes collective personal mobility, our automobiles. Perhaps unrealistically, we actually "love" our vehicles and count on them maybe beyond reason. However, certainly they can be outrageously costly or thoughtfully economical. Yet, they are only just cars for crying out loud. Car Talk has instead taught us to laugh out loud.

Almost 30 years ago, my late highly unmechanical mother who lived in another region of the country told me that she loved listening to Car Talk. She said that she hardly understood a thing that Tom and Ray said about cars, but she loved their way of saying it and their wonderful and witty perspective. This musical underscores this, the mundane mechanics are made marvelous.

Car Talk: The Musical is as silly, sensible, clever, funny and thought-provoking as the radio program that it is based upon. It is a wonderful way to set odometers for the Summer, check our guages and make sure the wheels are aligned before we drive into the sunset or to the beach, our vacation or even just the cleaners and grocery store. Car Talk: The Musical is a joy ride that we should all take.