At Berkshire Theatre Festival to July 3 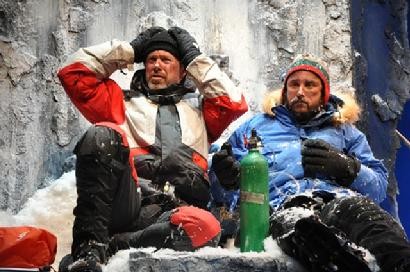 Tim McGeever, as Taylor, left, and Greg Keller as Harold, cling to life on a tiny ledge at 27,000 feet. 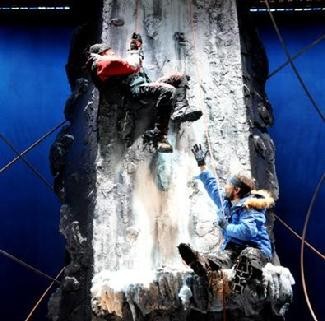 A fateful moment during a tense drama. Images courtesy of Berkshire Theatre festival.

The visceral, galvanic, spellbinding 1983 play K2 by Patrick Meyer is a white knuckler as we grip the edge of our seats and hold on for dear life. Two climbers Greg Keller (Harold) and Tim McGeever (Taylor) face certain death if they don’t manage to descend from a tiny ledge on K2 the world’s second tallest and most dangerous mountain.

This is an awesome and fascinating production, tightly directed by Wes Grantom, that launches the 82nd season of the renowned Berkshire Theatre Festival in Stockbridge, Mass. through July 3.

There has been a terrible accident. While attempting the final phase of reaching the summit they have fallen to the precarious ledge at 27,000 feet. At a lower level are other members of the team who may or may not know of the fate of their comrades.

The drama opens as we find the climbers have miraculously survived the night without benefit of sleeping bags or a tent. It is clear that they can’t endure another night on the mountain. There is a narrow window of daylight to attempt a descent.

The stark and stunning set by Kenneth Grady Barker, a narrow, vertical sliver of stone and ice vividly conveys their mortal peril. This is further emphasized by the stark and compelling lighting of Shawn E. Boyle. The rumbles of nature and a disastrous avalanche are well conveyed in the sound design of J. Hagenbuckle.

Although it is summer Taylor thanks Harold for insisting that they wear state of the art winter snow suits (designed or selected by Laurie Churba Kohn). Initially, waking up and brushing off snow, Taylor is thrilled and celebrating a record for survival through the night at this altitude. We learn that for the highly competitive Taylor life is all about conquests of women, sending scum off to prison with lengthy sentences, and setting records climbing the tallest and most challenging mountains. It emerges that Taylor for all his swaggering accomplishments is a bit of a putz.

While joyous that they are alive and have beaten the odds Taylor executes the disciplined climber’s drill of situation assessment and equipment inventory. During the fall Harold suffered a broken leg and must be lowered by an improvised sling. He landed on Taylor’s shoulder causing a slight injury. But Taylor is furious that Harold’s cleats have caused tears in his new, state of the art, parka. Yet again that conveys the self absorption of the less than admirable, blustering, egocentric Taylor.

We come to wonder just what is the synergy that binds these comrades? We learn that the introspective, wry, poetic and whimsical Harold, the foil for all of Taylor’s tirades, is a former hippie now a physicist.  To help keep Taylor focused he spins yarns of his beloved quarks. Harold is also a loving and devoted husband and father. He speaks with lyrical melancholy of the loved ones at base camp in Pakistan whom he vowed never to abandon.

Searching through a back pack Taylor explodes in frustrated anger upon discovering that they are missing the crucial second rope. It was left above when they fell. After some discussion it is decided that he will climb back up and retrieve it. No luck. It seems that it is frozen. After some discussion Harold gently suggests that Taylor make another attempt. This time to tie a nylon ribbon (used to make an emergency sling). Then they will both pull and try to free the rope. They discuss what might happen. Debris. They protect themselves accordingly.

But more than debris the effort results in an avalanche. Most of their equipment is swept off the now even smaller ledge. Taylor has an angry melt down cursing the mountain and a hobby than has turned into a death sentence. He is now condemned like all that mostly black scum he has sent away.

Through this Harold drifts in and out of consciousness.  As their situation worsens by the minute he becomes ever more calm, stoic, insightful and poetic. Now  more certain not to survive we are incrementally  moved by his insistence of clinging to the last moments of life with grace and dignity. Through the superb and nicely measured performance of  Keller we come to deeply care about his character. Just as much as we deplore the arrogant jerk so perfectly conveyed by McGeever. This is a perfect and mesmerizing, joined at the hip, yin and yang, virtuoso pair of performances. While mountain climbing is the setting this play is really about the bonding of an odd couple. In a tense moment of life and death decisions Taylor, the jerk, conveys that he only wanted to have one friend. And it is his buddy Harold.

Taylor who can still make it off the mountain alone refuses to abandon his injured friend. With poignant melancholy Harold must convince him otherwise. This is conveyed with riveting and convincing tenderness. The contrast between the men is never more sharply defined.

With scintillating theatre at this level, and four, world class companies, it makes one shout for joy just to live in the gorgeous Berkshires. We slog through those grim winters just to have the ecstasy of  magnificent summer arts programming.

That said this was a tough evening for the audience. There was a lot of empathy for the actors. Even though the theatre is air conditioned they must have sweated bullets in that winter gear. While we were cool and comfortable they conveyed the sub zero temperatures than will soon turn their veins to ice. We also wondered about the physical endurance of some 90 minutes on that tiny ledge. This was a drama conveyed almost entirely by vocal projection. After the initial impact of the set there wasn’t much to look at. The injured Harold never moved all evening.

So gritty endurance and the ability to stay focused was as much a challenge for the audience as it was for the performers.

It was a great relief on the two occasions when Taylor ascended the peak. Since McGeever had only brief training in climbing we marveled at this precarious and effective aspect of his performance. We also were privy to a thumbnail sketch of the skills, techniques and challenges of the sport.

In every sense the smashing performance of K2 was a cliffhanger. What a stunning way to launch the 82nd season at BTF. Bravo.