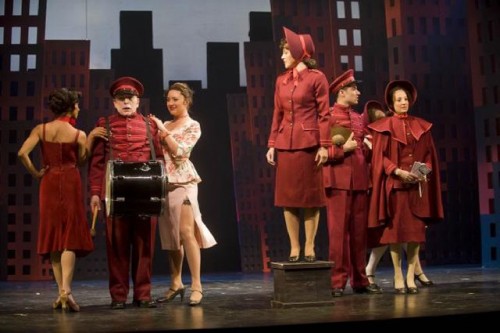 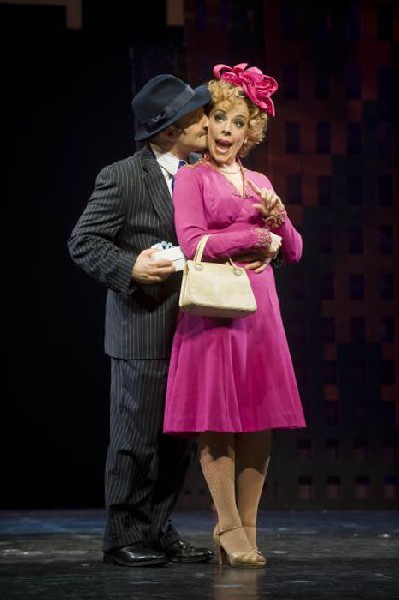 Nathan and Adelaide have been engaged for fourteen years. 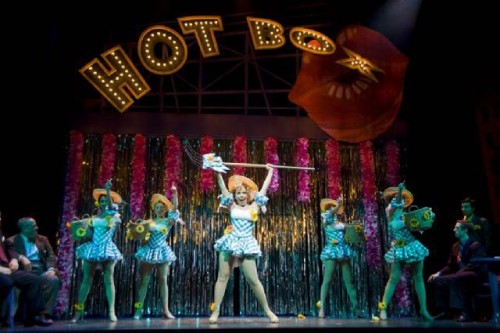 Adelaide and the Dolls sing Bushel and a Peck. 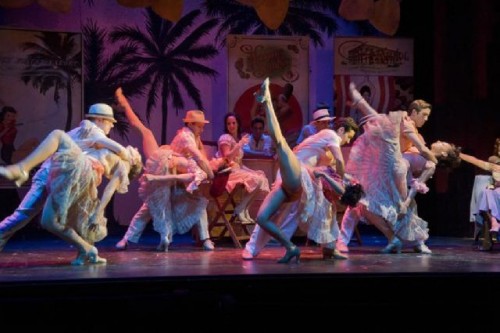 An escape to Havana to win a bet. 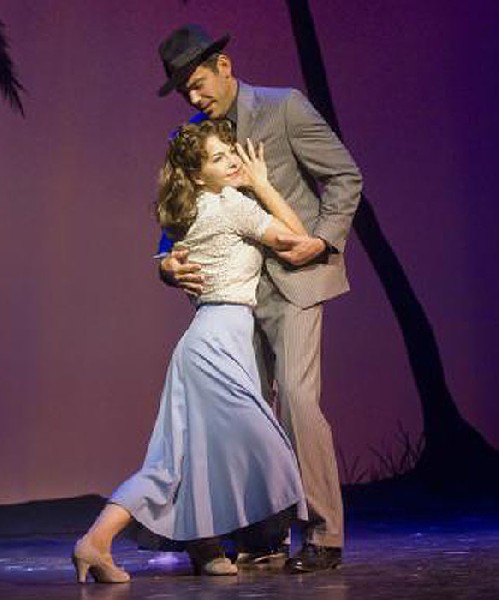 Too many Bacardi flavored milk shakes. 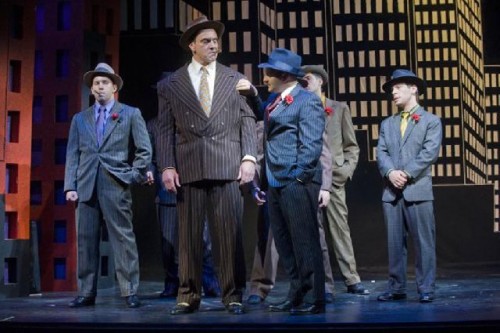 On a losing streak Big Jule demands to roll the bones all night long. 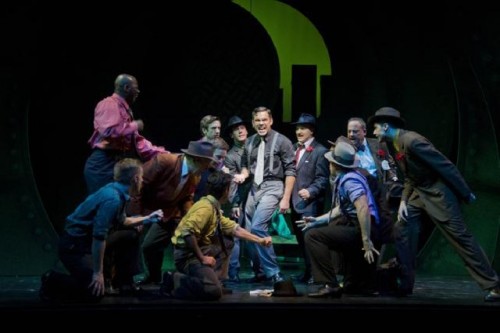 Sky shoots craps for the souls of sinners. 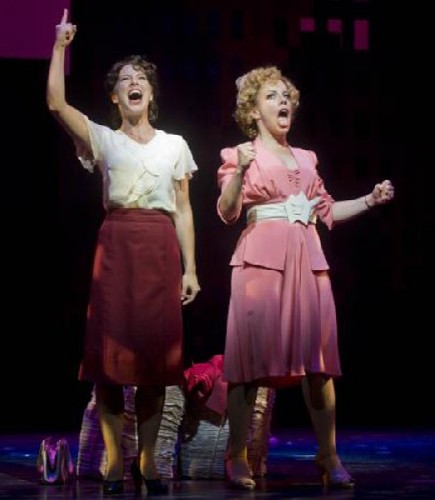 Sarah and Adelaide are united by Guy problems. 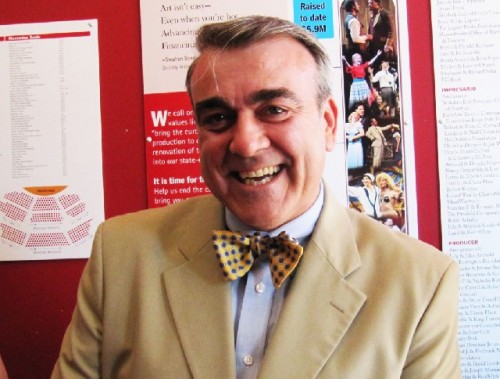 A smiling pr guy Charlie Siedenburg was all dolled up on opening night. Giulano photo. 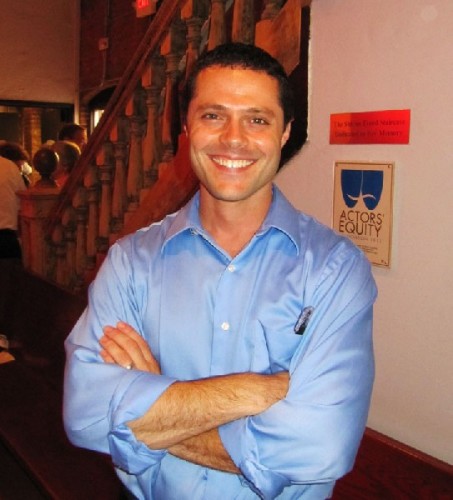 There was fabulous choreography by Joshua Bergasse, Giuliano photo.

It’s Broadway in the Berkshires with the red hot launch of Guys and Dolls on the Main Stage season at Barrington Stage Company in Pittsfield.

Down the street at the Colonial Theatre Tommy, the rock opera starring the global heart throb, Randy Harrison, opens on July 9. But with two thriving theatre companies in Pittsfield, and head to head boffo musicals, Guys and Dolls, at Barrington Stage, will be a tough act to follow.

The friendly rivalry will surely be a win win for audiences. With Jessica Hecht as Blanche, in Streetcar Named Desire opening this week at Williamstown Theatre Festival, Wilco’s Solid Sound Festival camping out at Mass MoCA this coming weekend, and Earth Wind and Fire at Tanglewood on Saturday night, we are off and running for what is promising to be a sensational season for the Berkshires.

A bit of advice. Glom your tickets pronto. These hit shows are bound to sell out fast. Trust me, start with Guys and Dolls, you will love every minute of this enduring classic.

As just a little shaver, in 1950, Mom took me to see the original Guys and Dolls on Broadway. All these years later I vividly recall when Sky Masterson put his hand over the tie of Nathan Detroit. Sky bet a C Note that Nathan couldn’t say what color it was.

As a ten year old I was amazed that a guy wouldn’t know the color of his tie. Years later, sadly, I too easily understand. Yesterday it was a thrill to relive that and so many other childhood memories. Thanks mom.

Arguably Guys and Dolls is on the short list of great American musicals. This totally fabulous production at Barrington Stage reveals why.

The audience didn’t just applaud those stunning song and dance segments. They went nuts. You thought you were at La Scala as they stomped, hooted and hollered. There were even shouts of “Bravo, Bravo.” It was earth shattering. Now how often do you hear that during a musical comedy?

There was such an abundance of riches that one wonders just where to begin. Perhaps with the great set of best of the Berkshires designer Alexander Dodge. The stunning and sexy costumes of Aleo Vietti.  Except for the prim and proper uniforms of the ersatz Salvation Army, of course. Can’t do much with that. Why are Christians so gosh darned drab? Why does blind faith require that you have to dress so badly?

The direction of John Rando kept the jokes popping and the musical numbers totally snappy. In the pit music director Darren Cohen never missed a beat. The choreography of Joshua Bergasse was absolutely fabulous. Pat McCorkle did a terrific job of casting with some truly inspired touches. Like the towering, ominous and immense Michael Nichols as Big Jule. His huge presence scared the willies out of Nathan Detroit (Michael Thomas Holmes). Me too.

But the bigger they are the harder they fall. Even when they pack heat. With one blow to the jaw Sky Masterson (Matthew Risch) felled the giant and grabbed his piece.

What makes Guys and Dolls ultra special is its great book by Jo Swerling and Abe Burrows. More Burrows than Swerling. Based on stories by the chronicler of gangsters and their molls, or Guys and Dolls, Damon Runyon.  The original production earned five Tony Awards as well as a Pulitzer Prize. But because of a run in with HUAC by Burrows the Pulitzer was not awarded that year. During the early years of TV Burrows was a regular on the celebrity panels of What’s My Line.

Back in 1950 Guys and Dolls depicted a low life world I knew nothing about. But even as a squirt I got the plot about a bad guy, Sky, who falls for the virginal preacher, Sargent Sarah Brown (Morgan James). How a down and dirty sinner is transformed by love to the path of righteous redemption. Praise the Lord.

James as Sarah Brown may play a virgin toiling in the vineyard of the Lord, but when she opens her mouth, be still dear heart, she sings like an angel. Great pipes. She has such wonderful songs  to display the full range of her vocal talent “I’ll Know” and “If I were a Bell.” Risch is equally warm and wonderful in a stunning and deeply moving rendering of the perennial “I’ve Never Been in Love Before.” It’s no stretch to comprehend how a hardened sinner like Sky would fall for a doll like Sarah. What kind of doll are you he asks when things go sour at the end of act one. “A mission doll” she responds.

Sky may be a lousy, two bit gambler but he makes good on a marker to fill her church with a dozen hardened sinners. The Times Square mission has been a failure and the General, who shows up unannounced (played with comic panache by Peggy Pharr Wilson), threatens to shut it down. Even the General, it seems, has the hots for Sky.

By the end of the play not only has love prevailed but The Lord too.

And, my goodness, all those great songs by Frank Loesser, many of which became enduring cabaret standards. When Sky shoots craps for the souls of the sinners he sings the Sinatra standard “Luck Be a Lady.” Miss Adelaide (Leslie Kritzer) and the Dolls performed one of the great novelty songs of the era “A Bushel and a Peck.” It’s a tune Ella Fitzgerald always had fun with.

The audience went total bonkers over the galvanic choreography of “The Crapshooters Dance.”

There were so many glorious moments interspersed by the parallel love stories of Sky and Sarah as well as the sub plot of Nathan’s fourteen year long engagement with Adelaide. It seems she has been telling her mother about her marriage and many children with Nathan. But Nathan keeps holding her off until he makes one big score at his oldest floating crap game in New York.

Even though the story line slows down now and then to advance the plot, a rather complex and compelling one for a musical, it takes off again and again with terrific musical numbers.

In addition to the stars there is such amazing depth to this cast. The audience roared for the song and dance of the portly and oh so talented Daniel Marcus as Nicely-Nicely Johnson. When Sarah is smitten and suffering in her love for a then unrepentant sinner, she is so warmly consoled  by her grandfather, Arvide Abernathy (Gordon Stanley). It was a wonderfully poignant moment in the fast paced production.

It would seem that Sarah and Adelaide have nothing in common. They are worlds apart. But they share their misery and man troubles in the wonderful comic duet “Marry the Man Today.” The bottom line, where have I heard this before, is bag the guy, signed sealed delivered, and reform him later.

In the end we see that Sky has traded his pimp and gambler duds for a Salvation Army suit. All for love it seems but, for the smashing and dashing Sky Masterson, a really terrible fashion statement.

Yesterday at Barrington Stage, for two and a half splendid hours, I escaped all my day to day cares and woes. All too briefly I was floating on cloud nine. Wow.