At the Mahaiwe Great Barrington June 26 & 27 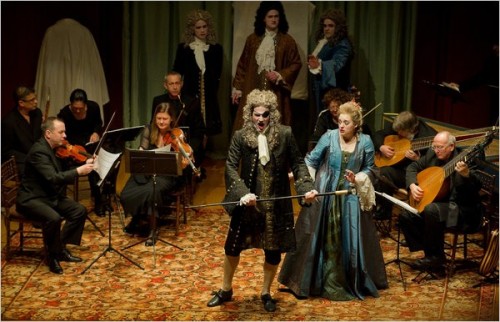 Handel’s Acis and Galatea is coming to the Mahaiwe in Great Barrington. 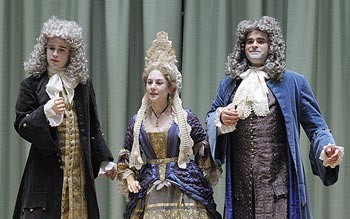 Perpare to applaud until your hands are raw. 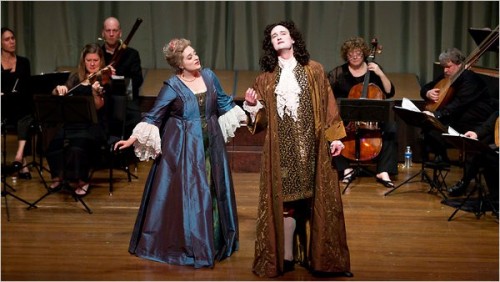 “Super OTW” - that’s how DeKoven, the flamboyant classical disc jockey who helped popularize baroque music over the radio in the 1960s and ‘70s through his Barococo Society, described something so good that it was “out of this world.”

Well, Saturday night at Jordan Hall, “Acis and Galatea” was so out of this world that had he heard it, DeKoven would have been launched into outer space.

I am a big fan of baroque opera and have heard as many of them as I’ve been able to over the past 30 years. The BEMF’s production of Handel “pastoral entertainment” – he didn’t call it an opera – was the best I have ever seen. Everything about it was perfect from director Gilbert Blin’s concept of setting it as a rehearsal in the Picture Room of the country house where it was to presented, to the period costuming and fluid staging to the orchestral playing (only 10 instruments, but boy did they make a full and gorgeous sound!) to the incandescent singers.

The story, adapted from Ovid, is so simple it can be told in a few sentences. The shepherd Acis loves the Nereid Galatea and she loves him. However, the deformed one-eyed monster Polyphemus also loves Galatea and tries to win her away from Acis. His crude seduction technique turns her off and she spurns him. In revenge, he kills Acis – in the text with a boulder, here with a spear. Using her powers as a goddess, Galatea turns her dead lover into an everlasting spring.

The real star of the evening was Handel, whose genius as a composer of operas and master of melody becomes more apparent every year as more of his works enter the central repertory and more young singers understand and are able to deliver the vocal requirements of his style. “Acis and Galatea,” a relatively short work of only two hours including a 15-minute intermission, was written for the country house Cannons, the seat of the Duke of Chandos, one of the leading patrons of art and music in early 18th century England. (His painting collection included works by Caravaggio, Annibale Caracci, Guido Reni and Nicolas Poussin, among many others.) The frequent unveiling of paintings – reproductions of well-known Titians and Poussins – in background proceedings as the rehearsal progresses is one of the delicious directorial touches that make the entire production so winning.

In itself, “Acis and Galatea” could serve as a compendium of greatest hits. Every number, from the first chorus, “O the Pleasure of the Plains/Happy Nymphs and happy swains” is a familiar example of Handelian melody at its most hummable.

Of course, the evening could have been merely a concert with costumes of some of the most popular Victorian parlor songs. (That’s why so many of the melodies are familiar, at least to those of a certain age.)

But this cast of brilliant singers was also composed of brilliant actors who brought the drama to life. Aaron Sheehan and Teresa Wakim portrayed the love of Acis and Galatea passionately, if decorously, and Galatea’s grieving over her dead lover was that of a desolate woman. Douglas Williams made Polyphemus’ anger and hatred palpable as he spat out the recitative, “I rage, I melt, I burn.” The intense feelings the three principals conveyed might have violated the gentle prescriptions of an 18th century pastoral but they helped to make the evening riveting theater.

The off-season Chamber Opera series – this is a repeat production from 2009 – was originally intended as a showcase for young local singers. In a few short years, however, the local crew of local singers who have been featured in the series – among them, Sheehan, Williams, Wakim and Amanda Forsythe, who took the title role in the festival’s fully staged centerpiece opera, “Niobe, Regina di Tebe” - has grown in stature to merit star status in major productions. Hearing Forsythe blend her beautiful soprano with international superstar Philippe Jaroussky in “Niobe” was demonstration enough that Boston has produced another crop of important singers to succeed the late Lorraine Hunt Lieberson, Sanford Sylvan and James Maddalena, singers who developed here in the 1980s.

Saturday night at Jordan Hall, the singers outdid themselves. I had not previously heard Wakim produce such clear, full, evenly produced bell-like sound. We knew we were in for a special evening when she sang her first aria, “Hush, ye pretty warbling Quire!/Your thrilling Strains/Awake my Pains,/And kindle fierce desire.” This was Golden Age singing.

Sheehan, a naturally sweet tenor, has had a tendency to be a tad bland - the natural fallback position of his vocal type. Here, he fully occupied a role like I’ve not heard him before. In his aria, “Love sounds th’Alarm and Fear is a-Flying!/When Beauty’s the Prize, what Mortal fears dying?” his ringing tone and passionate delivery – almost heldentenor in quality - brought tears to my eyes.

Williams tore the house down as the maleficent Polyphemus, his sonorous and flexible bass-baritone almost creating a sense of terror on the stage. (The great irony of the casting was that Williams, surely one of the more physically beautiful persons on today’s concert and opera stage, played a deformed monster – and he did it believably!) Williams got to sing the Handel chestnut, “O ruddier than the Cherry!/O sweeter than the Berry!/O nymph, more bright/Than Moonshine Night!/Like Kindlings blithe and merry,” a merry song for a monster, but his rumbling voice invested it with menace. (Berkshire readers might be interested to know that Williams also studied Shakespearean acting at Shakespeare & Co. in Lenox. Which makes him a double threat: potentially both a great singer and a great actor.)

By the way, the two smaller vocal roles, the shepherds Coridon and Damon, were sung with superb tone and nimbly acted by Michael Kelly and Jason McStoots, respectively. And in the uncredited non-singing role of the Italian teacher, who directs and comments upon the action through movement and gesture, Melinda Sullivan was a very special addition to the work. (I believe she was Blin’s invention – if so, bravo!)

One of the great pleasures of the evening was hearing how the singers dealt with the da capo repeats, a crucial part of the a-b-a structure of the typical baroque aria. The da capo section, a repeat of the opening melody and text, gives the singer the opportunity to create variations on the melody, adding elaborations and ornaments. In the past, many singers lacked the confidence to elaborate on the theme more than timidly. The new generation of early music singers, among them Wakim, Sheehan and Williams, has learned how to do it naturally and fluently. The vocal ornamentation – along with the credenza in a concerto – is when classical music comes closest to jazz improvisation. In one of her ornamentations, I swear I heard Wakim bend a note. The da capo sections of nearly every aria were the pay-off.

“Acis and Galatea” was first produced by the festival in 2009, and during the past year, it was presented in Vancouver, Seattle, Kansas City and New York City. The cast is thoroughly familiar with their roles by this time and their comfort with the music and with themselves was evident. They were having such a good time that it proved contagious to the audience. When Wakim got the first big ovation for an aria, it seemed to spur her friendly colleagues on to outdo her. The evening increasingly became a sort of “American Idol,” early music division. And as each singer pushed him/herself to top their colleagues and their own earlier performances, the audience became part of the act, too. Thunderous applause greeted aria after aria. By the end of the evening, when the cast repaired to the back of the stage together to reprise the opening chorus, “O pleasure of the Plains,” it was clear that it was a love fest all around.

In recent years, the BEMF has recorded its opera presentations. This production of “Acis and Galatea” is a prime candidate for sonic preservation.

Lucky residents of the Berkshires, where country pleasures are known to take place! “Acis and Galatea” is coming your way and you have two opportunities to hear it. Be prepared for the singing of a lifetime and be prepared to pound your hands together until they’re raw.