Tigers Be Still at Chicago’s Wit 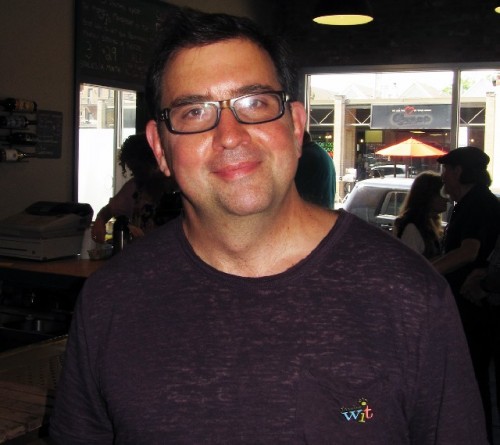 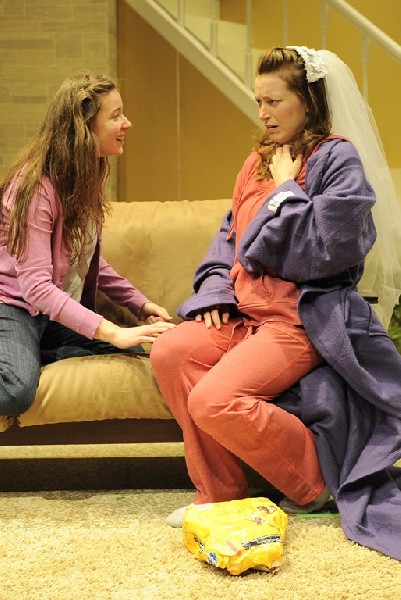 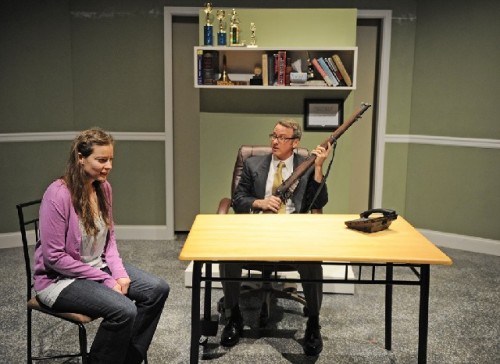 Sherry applies for a teaching job. 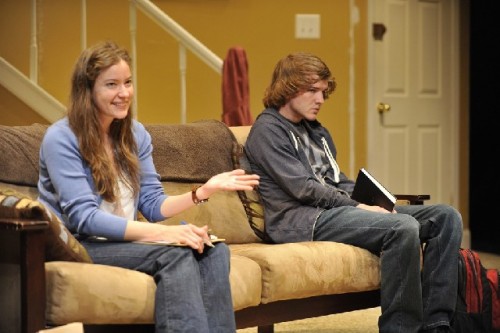 Her first art therapy client is the principle’s messed up son Zack. 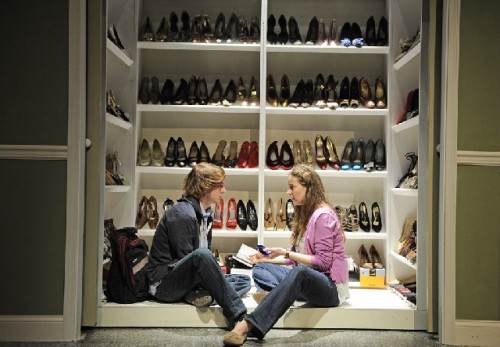 In the closet with Zack’s Mom’s shoes. 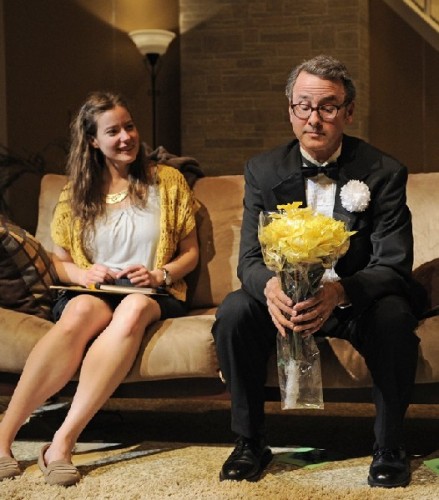 The principle to Sherry’s mom to the prom.

Apparently there are some 200 plus theatre companies in Chicago. That includes storefront and street theatre. Perhaps the back room of a pub, Laundromat, or a sweltering loft.

In the broadest sense a theatre company means a group of individuals devoted to presenting live performances under circumstances ranging from grand and well endowed to cobbled together on a shoestring.

As the nation’s Second City it seems that Chicago is a Mecca for young and experimental companies.

With its three stages Theatre Wit collaborates with some forty plus companies. Jeremy Wechsler its upbeat and energetic artistic director is a theatrical ringmaster.

Delegates to the American Theatre Critics Association made their way by T to WIT for an afternoon of panel discussions. There was a dinner break at a range of neighborhood restaurants. Then a random lottery to assign us to one of three concurrent productions.

A number of delegates signed on for late night performances. Abarbanel told us that those individuals were mandated to attend Tigers Be Still as it had the shortest running time to scamper off to late night entertainment.

We asked Wechsler for a recommendation on which of the three shows to see. Of course he answered “See my show.” To which we had actually been assigned although he had no late night plans.

It proved to be a nice bit of serendipity although over breakfast colleagues reported really enjoying the other two shows.

Based on rave reviews Tigers had been extended and we were fortunate to catch one of the last performances during the closing weekend.

The long rectangular space, designed by Andrei Onegin, was set up with two rows of folding chairs on either side. There was the suggestion of an interior living room at one end and a blank projecting wall opposite which morphed first into the office of the high school principle Joseph (Guy Massey). Then a surprise which came later.

Waiting for the show to start we examined a really messy living room with tons of props selected by Emily Bennett. It seems that this stuff was stolen by Grace (Kasey Foster) from the fiancé who recently dumped her.

There is also the matter of two small dogs locked in the basement. Only through a catatonic haze does Grace occasionally have the impulse to kick some food under the door.

We first encounter the ditsy, dysfunctional, endearing and hilarious Sherry (Winn Heider) trying to tidy up and make some order of the chaos. She pulls a blanket off the couch which is when we first discover Grace who is so depressed that she just wants to stay smashed on Jack and sleep through life as an endless hangover.

In seems that even getting downstairs to the couch is an epic accomplishment for the weird sisters.

When their father abandoned the family Mom got so depressed that the doctor medicated her. But an adverse side effect is that it made her so obese that she won’t let anyone see her. Including the wacko daughters who she tossed out of her bedroom.

The phone rings from time to time with a grocery list for Sherry.

With an odd mannerism of swallowing her words in little wheezy punctuations at each new setback Sherry seems intent on landing a job. A newly minted MA in art therapy is going nowhere.

Finally she lands a teaching job as well as a side gig of providing therapy for the principle’s messed up teenager Zack (Matt Farabee). In addition to one on one sessions at Sherry’s gonzo home he will be her teacher's aide.

Zack is serious about his job at CVS until he is fired. Then walks across the street to get hired, no questions asked for minimum wage, at Walgreen’s. From which he also gets sacked for pilfering out of date Easter candy.

Oh yes, and a tiger has escaped from the zoo.

Needless to say things run amuck with Sherry in a self-effacing way trying to keep a happy spin on things. Her topsy turvy life is just one big smiley face. No matter how bad it gets. Which is why we come to love and cheer for her.

Never has a character been more deserving of a bit of luck. At least in her inept manner she keeps trying while Grace falls asleep sucking on booze like a baby bottle.

The mop headed Zack has good reason to be so messed up. He, well, kindah, accidentally killed his mom when the car he was driving slammed into a tree. In an instinct to save himself he swerved and totaled her. It will take years and years of art therapy to get past that.

Which is to say that Sherry doesn’t have a prayer with her first bona fide client. Who, in a classic example of transference, is falling in love, sortah, with his therapist.

It seems that Zack’s dad took the mother of Sherry and Grace to the prom.

Well it all spins wildly out of control and we won’t try to put a lid on it.

Tiger was great fun and a charming little play which Kim Rosenstock developed in New York at Roundabout. You go girl.

On the way home it felt like we had won the lottery.