Hot Time Summer in the City 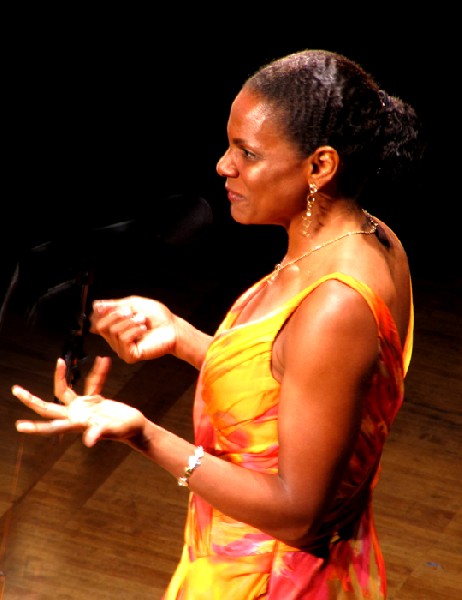 Diva Audra McDonald will star in Porgy and Bess at the American Repertory Theatre.

WHAT: NO WAY TO TREAT A LADY
WHERE: CAPE PLAYHOUSE DENNIS MA
WHEN: Through JULY 9
TICKETS: 1-877-385-3911 An uproarious, sexy musical that gives new meaning to the phrase "knock 'em dead"!
A serial killer is on the prowl and Detective Morris Brummell is on the case.
Can he find the killer, get the girl,
and pacify his disgruntled, overbearing mother -
all before the next chorus?
This darkly comic thriller is a devilish blend of
humor, romance, murder and music
with four amazing actors playing seventeen roles.
Killer!

WHAT: PORGY AND BESS PLUS …
WHERE: LOEB  THEATRE. CAMBRIDGE MA
WHEN: 2011- 2012 SEASON
PSST…here’s a scoop. The American Repertory Theatre will be presenting Gershwin’s Porgy and Bess with the superb Audra McDonald, Norm Lewis, and David Alan Grier. The music is glorious and the singers are fantastic. Enjoy the classic songs “I’ve Got Plenty of Nothin’”, “It Ain’t Necessarily So,” “Bess You Is My Woman” and many more.
Get your tickets now for Porgy now you’ll be happy you did.
Other shows include Wild Swans, Futurity: A Musical By the Lisps, Three Pianos and Woody Sez , Rounding out the season is Shakespeare’s romantic comedy “As You Like It.”

WHAT: PETER PAN
WHERE: CITY HALL PLAZA
WHEN: OCTOBER 18 TICKETS ON SALE NOW
TICKETS: Tickets are available online at www.peterpantheshow.com/boston and by phone at 888-PPANTIX (1-888-772-6849). For groups of 10 or more, call (617) 532-1116.  “Into Neverland” tours will be available Saturdays throughout the run.
Boston audiences are in for a treat this fall, as the spectacular new threesixty° stage production of PETER PAN, J M Barrie’s classic story performed in a state-of-the-art theater tent, flies into Boston for a limited six-week engagement, beginning Tuesday, October 18, 2011. More than 500,000 people on two continents have enjoyed this theatrical experience Conceived by an award-winning creative team and featuring 23 actors, stunning puppets, epic music, dazzling flying sequences performed in the world’s first 360-degree CGI theater set, PETER PAN is an extraordinary experience. The Boston engagement of the timeless masterpiece is presented by threesixty° entertainment.


WHAT: CINDERELLA
WHERE: HARWICH JUNIOR THEATRE 60th SEASON
WHEN: THROUGH JULY 17
TICKETS: BOX OFFICE: 508-432-2002.
An enchanting musical by Rodgers and Hammerstein,
Harwich Junior Theatre (HJT) was recently named as one of Massachusetts Greatest Places to Visit by the Massachusetts Office of Tourism. HJT is Cape Cod's premier family theater voted BEST THEATER by Cape Cod Life and Cape Cod View Magazines, and theCape Cod Chamber of Commerce "A LIST". HJT is beloved by audiences of all ages for its stunning live performances of plays and musicals! Our year round classes are a national model for theatre arts education. AIR CONDITIONED! Wheelchair accessibility!
Tuesday- Thursday eves at 7:30 PM
Friday, Sunday matinees at 4 PM
*Saturday matinees on June 25 and July 2 at 4 PM
The timeless enchantment of a magical fairy tale adapted for the stage. Filled with great warmth and more than a touch of hilarity, the hearts of children and adults alike will soar when the slipper fits.

WHAT: AND THE WORLD GOES ROUND
WHERE: NewRep THEATRE
WHEN: JULY 10-31
TICKETS:617-923-8487
I saw this compilation show during it’s New York run and it was wonderful. Susan Stroman took some of the best Kander and Ebb songs and created And the World Goes Round. So enter the world of distinguished and celebrated writing team Kander and Ebb. In this outstanding retrospective of their work, your favorite songs such as "Mr. Cellophane," "Maybe this Time," "Cabaret," and "New York, New York" are seamlessly interwoven into a passionate, harmonious, up-tempo evening of musical theatre.
A handsome, tasteful, snazzily staged outpouring of songs and dance that celebrates all the virtues of the Kander-Ebb catalogue.?THE NEW YORK TIMES

New York Update:
I heard the Book of Mormon album and the music is terrific. The people I know who saw it loved it. So, I am going to see it in September and I will give you an in depth report. In the meantime, I did see Pricilla Queen of the Dessert while in the Big Apple. It is a hoot. Of course the songs are fabulous, but you knew that. The costumes deservedly won the Tony, they are outrageous and so creative. The acting and singing is A-one.  Feeling blue? Pricilla is better than any psychiatrist or Prosac.

Have a great July. We'll catch up again in August.