The Year of Magical Thinking

A Production by GableStage Near Miami 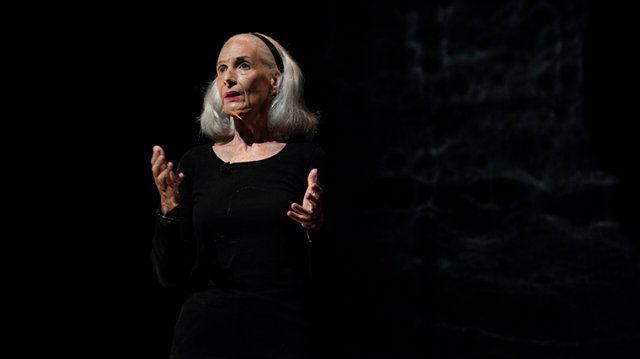 Photo by Magnus Stark Sara Morsey portrays author/journalist Joan Didion in GableStage's production of the stage adaptation of "The Year of Magical Thinking." 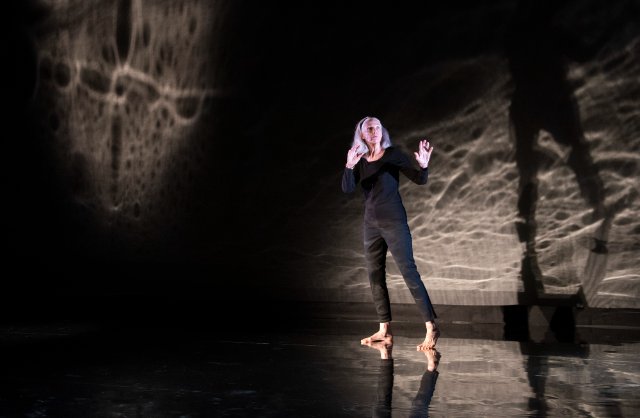 Photo by Magnus Stark Joan Didion (Sara Morsey) appears in a scene from The Year of Magical Thinking.

A mirrored floor is part of the minimal yet effective set in GableStage’s haunting production of the moving, one-character stage adaptation of writer Joan Didion’s powerful memoir, The Year of Magical Thinking.

The production, by the professional, non-profit live theater company, GableStage, runs through June 26. The venue is the company’s theater next to the Biltmore Hotel in Coral Gables.

Obviously, a mirror forces you to see yourself as you are – not as you imagine or hope yourself to be.  Indeed, you cannot escape your reality when you are in front of a mirror.

On Dec. 30, 2003, author and journalist Joan Didion’s reality was particularly hard for the writer (1934-2021) to accept. On that day, her husband, author John Gregory Dunne, died of a sudden heart attack. It happened as John (1932-2003) sat down to dinner with his wife in their New York apartment. As if that were not enough, their adopted daughter, Quintana Roo Dunne, (1966-2005) was seriously ill in the intensive care unit of a hospital. In fact, she was clinging to life. She was in her late 30s and just married.

Perhaps Didion’s real-life double nightmare was too much for her to accept as reality. And so, she began to believe that her wishes might possess the power to bring John back. Didion referred to her belief that her thoughts and wishes could alter reality as “magical thinking.”

Of course, Didion was hardly the only person to think that way. Actually, through her research on grief and mourning, she found many examples of this type of behavior.

In The Year of Magical Thinking, the author (a thoughtful, reflective, and believable Sara Morsey in GableStage’s production), recounts the year following her husband’s death. In particular, she tells us about her efforts to make sense of her grief while tending to Quintana’s severe illness.

Didion’s talent as a writer is on display in The Year of Magical Thinking. For instance, she uses specific and spare language to describe her situation. Further, the piece is brutally honest; it forces us to accept the fact that Didion’s reality will some day become our own reality.  While the particulars may differ, we will all lose a loved one at some point – and have to accept the harsh reality that he or she will never return.

Toward the beginning of the play, which Didion also penned, she inserts the following line about her husband’s sudden, unexpected death: “This happened on Dec. 30, 2003. That may seem a while ago but it won’t when it happens to you. And it will happen to you.”

While Didion is frank with us, she avoids hammering us over the head repeatedly with her message. Rather, the play, not harshly but firmly, reminds us that dying is part of existence. And, as quality theater often does, the piece reminds us that we are not alone in dealing with tragedy. Certainly, the reminder is always timely. Yet, it feels particularly so during the present, when illness, violence, and death seem to surround us.

During The Year of Magical Thinking, Didion becomes consumed with the idea of self-pity, its relationship to grief and mourning, and how society perceives such feelings. However, for the most part, the author refrains from pitying herself. Rather, she mentions statistics and facts. That is not surprising; she was a journalist. And perhaps dealing with things that were familiar to her (statistics and facts) helped her to cope during an unimaginably difficult time.

Of course, too many facts and statistics can render a theatrical piece dry and tedious. And, as is the case in the memoir, Didion is much less emotional than one might expect her to be. Thankfully, under Bari Newport’s assured direction, Morsey, as Didion, comes across as thoughtful and reflective rather than cold and distant. Also, Newport, GableStage’s Producing Artistic Director, moves Morsey around the stage so that she never becomes a stationary “talking head.”

Variety and movement are important in a piece such as The Year of Magical Thinking. After all, the performer is onstage and speaking throughout the intermissionless production’s roughly 100 minutes. Further, she stands the whole time. Obviously, it requires not only talent, but stamina to remain in character for that long. Undoubtedly, Morsey, an actor with gray hair and grey-bluish eyes, possesses both in a performance that sounds as though the actor is speaking the words for the first time. Actually, Morsey also played the role in 2012 at Florida Repertory Theatre in Ft. Myers.

Meanwhile, sound designer Matt Corey has included haunting music that enhances the piece’s mood. And Tony Galaska’s shadow-producing lighting design creates reflections of the performer. Like the mirror, the shadows reinforce the idea that you cannot escape yourself or your reality.

Frank J. Oliva’s simple projection and scenic design complements the action rather than distracts from it. For instance, a back scrim displays numbers that stand for chapters. Along with the numbers, the scrim displays words from the text that are supposed to introduce the scene. However, short phrases such as “I Told You” and “There Was” do little to prepare us for what is to come.

In addition to numbers and words, some projections resemble fractals. With Morsey’s figure also reflected on the scrim, the fractal-like objects appear as though they are splattered around her. It is an appropriate image for a play in which someone’s life is suddenly in shambles.

With the exception of the mirrored floor, the stage is empty. This allows us to focus solely on the performer and the words.

Costume designer Camilla Haith’s outfit for Morsey is basic, yet appropriate – black tights and a black top. Black blends in seamlessly with the dark stage and backdrop. All reflect the play’s sad, dark subject matter. You may also notice that Morsey is barefooted. It can symbolize Didion’s vulnerability.

While the play is never depressing, it is, nonetheless, hard to watch. If someone decides not to attend because, for instance, they are afraid of death or the subject is overwhelming, that is all the more reason to attend. If nothing else, the play can serve as an exposure for such a person. Besides, The Year of Magical Thinking, like most quality theater, is a relatable piece that will make you think about your own life.

GableStage’s production of The Year of Magical Thinking runs through June 26 at GableStage’s theater, 1200 Anastasia Avenue in Coral Gables, next to the Biltmore Hotel. Remaining showtimes are 2 and 7 p.m. Wednesday, 7 p.m. Thursday, 8 p.m. Friday and Saturday, as well as 2 p.m. Sunday. Also, you can stream the production through June 26. Those interested in streaming should buy a ticket to a specific performance to receive a streaming link for that date/time. The streaming will begin at the same time as the show; it will not be on-demand. For tickets and further information, go to https://www.gablestage.org/the-year-of-magical-thinking.