Shaw's Classic is Reprised from 80 years ago 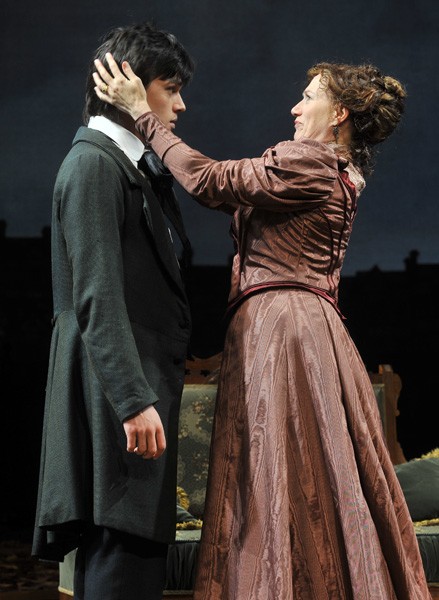 Finn Wittrock (l) as the would be lover and Jayne Atkinson in Candida at the Berkshire Theatre Festival. Kevin Sprague photos. 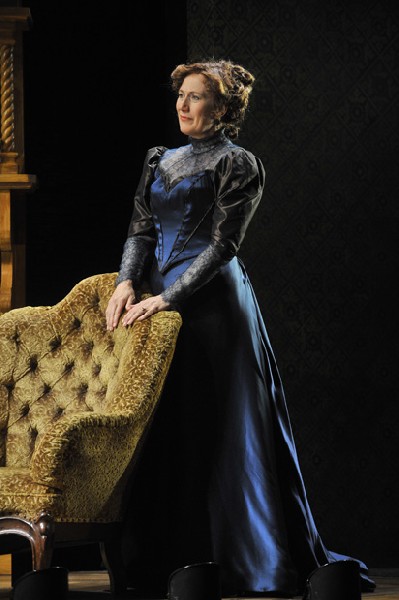 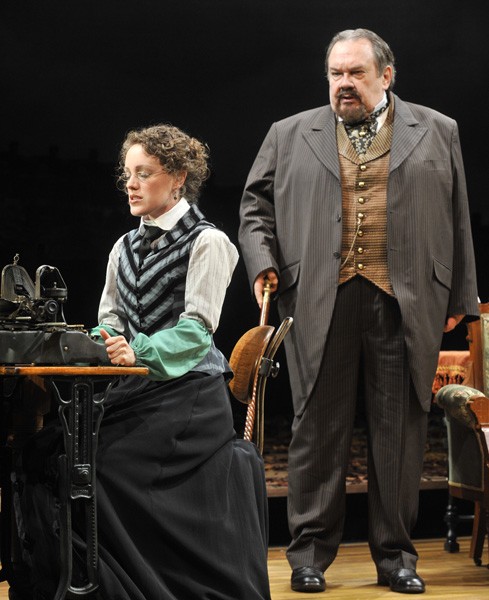 Samantha Soule and David Schramm provide delightful laughs in the midst of the serious love triangle in the Berkshire Theatre Festival production of Candida. 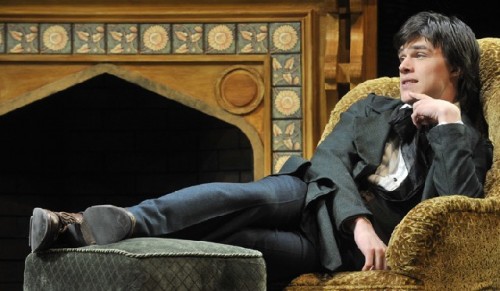 The amazing Finn Wittrock excels as the poet Eugene who is smitten by Candida in this Berkshire Theatre Festival production. 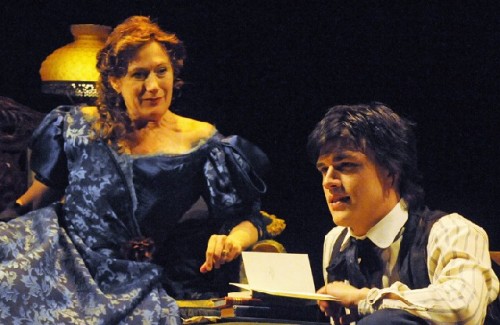 The poet’s verse manages to put Candida to sleep, but he barely notices. Jayne Atkinson (l) and Finn Wittrock. 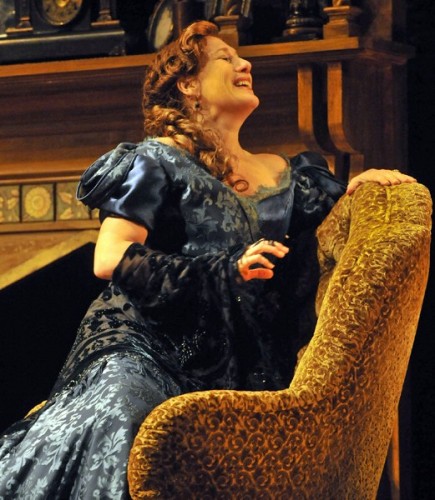 Jayne Atkinson is radiant in the title role of Candida in the Berkshire Theatre Festival production. 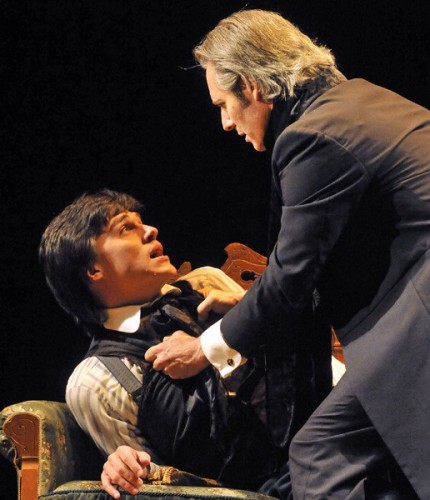 Michel Gill as the Reverend Morell and Finn Wittrock as the Poet argue over Candida. 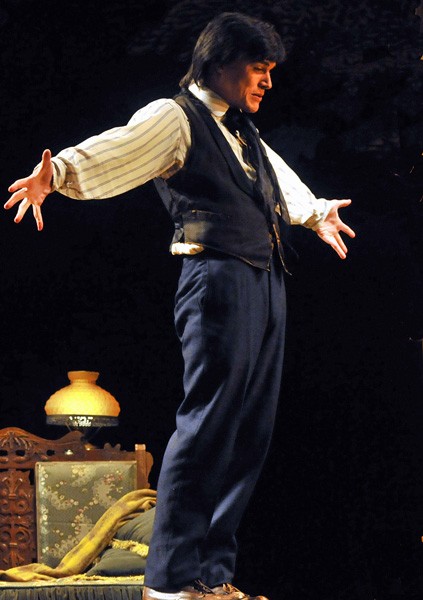 Finn Wittrock as Eugene Marchbanks states his feelings about Candida in no uncertain terms. 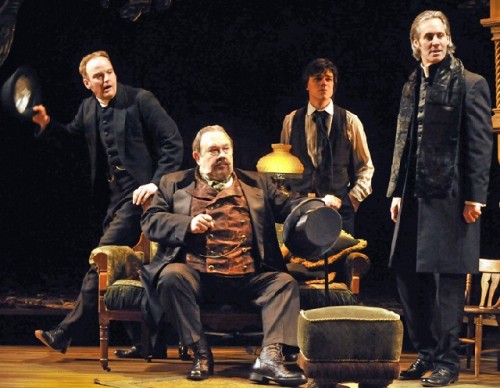 (l to r) Jeremiah Wiggins as Lexy, David Schramm as Mr. Burgess, Finn Wittrock as Eugene and Michel Gill as Rev. Morell in the Berkshire Theatre Festival production of Candida. 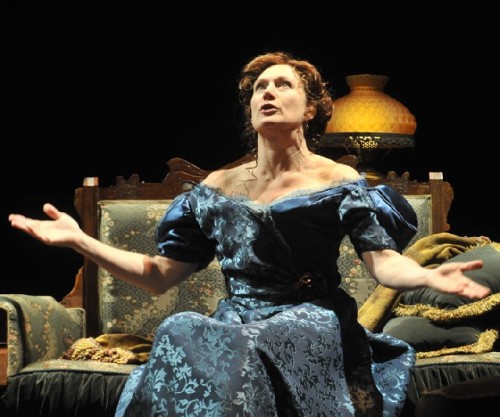 Jayne Atkinson has to choose between two men in the classic play Candida by George Bernard Shaw now at the Berkshire Theatre Festival. 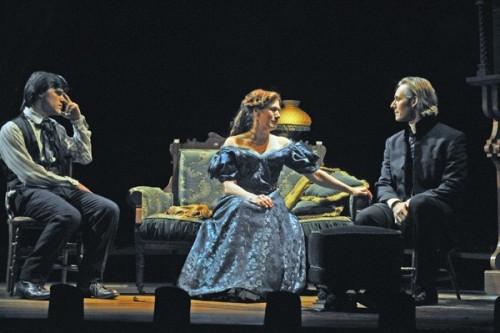 When Kate Maguire  announced George Bernard Shaw's "Candida" as the first mainstage production of their 80th Season, I had my misgivings. Even with the husband and wife  team of Jayne Atkinson and Michel Gill being reunited to play the husband and wife of this work, I was not  convinced. And the historical importance of having a work reprised from Berkshire Theatre Festival's first season eighty years ago did not resolve my doubts.

You see, some people are afraid of snakes and spiders. I fear old plays.

How wrong I can be at times. It is a known fact that I resist seeing old plays, especially those written before I was born. Having been frightened as a child by some ineptly performed travesties reeking of mothballs and cedar, I cringe at the prospect of more fake British accents, precious staging and leaden pacing. Sometimes I contemplate the task of reviewing Ibsen, Checkhov or Shaw as my Christian duty, akin to a theatrical but still mandatory High Mass. You go not because it is fun, but because you have to.

So the whiff of performances past lingered as I entered the theatre.

I worried unnecessarily.  George Bernard Shaw's "Candida" in the BTF presentation is as alive and vital as any British drawing room comedy can be, plus there is a timeless lesson to be learned as well. I was totally blown away by the excellence of the cast, and even more so by the astounding direction by Anders Cato which pushed the pacing to new limits, yet never seemed rushed. The three acts, with only one intermission, played itself in the blink of an eye, just under two hours.

In the matter of manners and morals, things have changed a lot from the end of the 19th Century when George Bernard Shaw wrote "Candida" and the beginning of the 21st with its post-feminist self-indulgent polyamorous tendencies. Back in 1895 when the play was written her difficult decision to stay with her husband was applauded as a show of strength. Today not running off with the poet to indulge her personal proclivities is seen by some as a sign of weakness, a failure to fulfill her own fantasies.

The play was written towards the end of the Victorian era which concluded in 1901 with the death of Queen Victoria. Shaw's play was revolutionary and showed the first stirrings of post-Victorian sentiment. Until then most British theater was stictly fluff and rarely political.  It was the age of overly sentimental theatrical fluff and contrived bon bons. Think Gilbert and Sullivan whose last comic opera The Grand Duke was written in 1896 and was a failure as the times had begun to change.

One more historical note before we get to the perormance itself:  Candida was written in 1889 and "The Ladies Man" now at Shakespeare & Company written in 1894. The two plays provide a contrast  in cultures, the serious Brits and  the naughty French.

They illuminate the very different worlds of France and England at the end of Queen Victoria's reign which contrasts sharply against the Belle Epoque era of continental Europe.  You owe it to yourself to take the grand tour, theatrically speaking, and see both!

As Candida's husband, the Reverend James Mavor Morell so aptly says: "Man can climb to the highest summits; but he cannot dwell there long." Morell is both a Reverend and a Socialist of the Fabian variety, which is to say, change from within, not through violent revolution. His wife, the lovely Candida, is independent in many ways, yet totally devoted to her husband in true Victorian style. She has just returned from a trip with the young and naive poet Eugene Marchbanks in tow, and he has fallen in love with her. As the play progresses, he announces his love for her to the Reverend, and eventually the two challenge her to choose between them.

In the most stirring moment in the play, Michel Gill as Morell
declares: "I have nothing to offer you but my strength for your defence, my honesty of purpose for your surety, my ability and industry for your livelihood, and my authority and position for your dignity. That is all it becomes a man to offer to a woman." The balance between passion and propriety is exquisite, the delivery equally formal and heartfelt. The incredible Jayne Atkinson (a two time Tony nominee)  as Candida accepts the oration with grace and authority, before turning to her other pursuer, the eighteen year old "whelp" of a poet, Marchbanks. He replies that all he can offer her is : "My weakness! my desolation! my heart's need!".

In the end, Candida announces her decision: "I give myself to the weaker of the two," though things are not nearly as clear as this statement seems.

The chemistry between the two principal actors, Atkinson and Gill as Morell and his wife Candida, is palpable on stage. They quite comfortably co-habitate the stage together, and make the audience feel that they have lived with each others foibles for a long time indeed. This was a very different time, well before women were emancipated, and during which rigid social convention ruled. In the play they are clearly ahead of the actual times, having given each other permission to be themselves, albeit with many of the social boundaries still intact.

Adding levity to the proceedings are both Samantha Soule as the Pastor's secretary, Prossie, Miss Proserpine Garnett, who forgets her place when she calls Candida's father, Mr. Burgess, a "silly old fathead." That and her underplayed but utterly delightful scene as a tipsy champagne drinker were wonderful.

From the first moment he arrived onstage, the gifted David Schramm delighted the audience as the harumphing windbag father-in-law to the long suffering Reverend. I can hardly wait to see him as Pozzo in the upcoming "Waiting for Godot" and also to be directed by Anders Cato. It appears to be a role made in Heaven for him.

Playing the Reverend Alexander (Lexy) Mill is Jeremiah Wiggins who does an excellent job of being both pincushion for others jabs and an eager acolyte.

But I declare that the surprise of the show and unexpected eye opener was  Finn Wittrock, an actor with a considerable bag of tricks for someone so, well, new to the game. As the young poet, he was a bundle of nerves, playing his spastic, uncertain character up to the edge of - but never over - the line. An actor with a dozen variations on the shrug, and a hundred tics played them all in perfect timing with the delivery of his lines. But then, when it was Candida or Morell's turn to speak, he maintained the character sans the twitches and jerks so as not to upstage the others.

Seeing this actor's character in motion was revelatory to me. When he was wracked with emotional turmoil and at a loss for words, his body conveyed the meaning in a way that words never could. The one side effect of his making Eugene into such a mess of a person is that I was unable to see why Candida had taken an interest in him in the first place. Perhaps, as she suggested to her husband, he would be good in the kitchen.  Or to simply "amuse" her, a sort of court jester, as she suggested in the second act.  And sometimes I just speculate too much.

Once again the scenery department did wonders onstage under the guidance of Hugh Landwehr. I loved the outrageous mantlepiece  with its never-ending ascending display niches and the authenticity of the props and furniture.  As anyone who reads me regularly knows, I am a firm believer in "method" scenery, and Hugh, I even admired the blown leaves covering the spaces surrounding the house. The trees and shadows moving in during the opening of Act III was a nice touch, too.  The costumes by Olivera Gajic were well executed.

Victorian plays can be claustrophobic but this one was not. A lot of the credit to the open and breezy effect has to go to the scenic design, but just as much praise belongs to the lighting design of Dan Kotlowitz. In addition to the feeling of openess was the fact that I was able to see every detail of the drawing room even while providing the delicate shadings that produced the feeling of the Victorian era. So many un-gelled lamps might be considered opportunities unexplored, but I for one loved the resultant clarity and clear light.  It goes with Shaws note to the director that this was an unusually un-foggy day in London.

Scott Killian's music was lovely and atmospheric, bridging the acts and bracketing important moments with restraint and beauty.  The stage manager, John Godbout, is no doubt racking his brain at this moment figuring out how to keep the rolling furniture on the set - like Prossie's chair - from sliding off the raked stage at unexpected moments. Good thing the actors have improvisational skills, they needed them at the matinee performance I attended.

In the end there is no question as to whether I would recommend this play to you. It is a superb production in every way. Here is a pleasant journey back to an age in which people thought about what they felt and said, and expressed it with a great deal of care. Best of all, the characters and situations in "Candida" are still relevant to today, and, I think, the solution just as appropriate. Don't miss it.